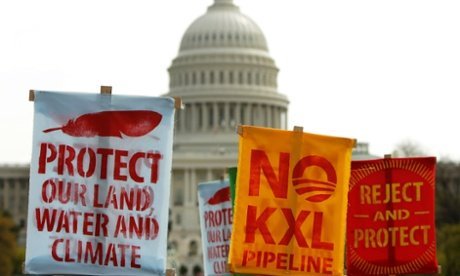 Obama’s Keystone veto threat is proof that climate activism works, no matter what the ‘insiders’ say

When the news arrived from the White House on Tuesday that Barack Obama would veto the GOP’s Keystone pipeline bill – or at least “that the president would not sign this bill” as is – I thought back to a poll that the National Journal conducted of its “energy insiders” in the fall of 2011, just when then issue was heating up. Nearly 92% of them thought Obama’s administration would approve the pipeline, and almost 71% said it would happen by the end of that year.

Keystone’s not dead yet – feckless Democrats in the Congress could make some kind of deal later this month or later this year, and the president could still yield down the road to the endlessly corrupt State Department bureaucracy that continues to push the pipeline – but it’s pretty amazing to see what happens when people organize.

The fight against the XL pipeline began with indigenous people in Canada, and spread to ranchers along the pipeline route in places like Nebraska. And then, in the spring of 2011, when the climate scientist Jim Hansen pointed out the huge pool of carbon in the Canadian tar sands, the fight spread to those of us in the nascent climate movement. We had no real hope of stopping Keystone – as the National Journal poll indicated, this seemed the most done of deals – but we also had no real choice but to try…more