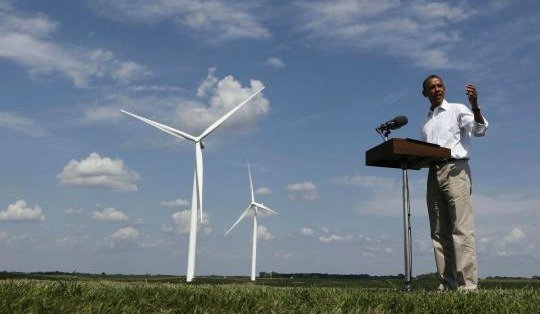 Obama’s EPA plan vs. climate catastrophe: ‘Fighting a wildfire with a garden hose’

(Credit: Reuters / Larrying Downing)In announcing new emissions standards of U.S. power plants on Monday, many of the nation’s largest green groups are championing the Obama administration’s new EPA regulations as the strongest proposals ever put forth by a U.S. president in the fight to rein in greenhouse gases or mitigate against climate change.

Not to throw a wet blanket on the news, however, there’s a serious catch that more critical environmentalists and organizations are taking the time to point out. Despite welcoming the move as “step in the right direction,” these voices—taken collectively—are saying it’s important that people recognize this essential fact: Given the scale of the climate emergency and the level of aggressive action needed, the Obama plan is just simply not enough. Not by a long shot.

“This is like fighting a wildfire with a garden hose — we’re glad the president has finally turned the water on, but it’s just not enough to get the job done.” —Kevin Bundy, CBD

Groups like 350.org, the Center for Biological Diversity, Friends of the Earth, Food & Water Watch, and Greenpeace USA are among those rising to challenge the emerging mainstream narrative that the new standards are somehow the best that could be hoped for or achieved.

“This is like fighting a wildfire with a garden hose — we’re glad the president has finally turned the water on, but it’s just not enough to get the job done,” said Kevin Bundy of the Center for Biological Diversity’s Climate Law Institute.

According to Gabe Wisniewski, climate and energy campaign director for Greenpeace USA, “The new rule shows that the Obama administration is serious about taking action on climate change, but the Administration could and should strengthen it considerably.”

Wisnieski pointed to his group’s recently published report—titled Energy [R]evolution – A Sustainable USA Energy Outlook (pdf)—which shows that from a technical perspective, the US power sector could achieve almost twice the reductions proposed in the rule while also creating more and better jobs, greater energy independence, and a more democratic energy system.

Erich Pica, president of Friends of the Earth, called Obama’s new rules “the most significant step by any American president to combat climate disruption.” Though a clear step forward, he added, “this rule simply doesn’t go far enough to put us on the right path. The science on climate change has become clearer and more dire, requiring more aggressive action from the president.”

Bill McKibben, co-founder of 350.org, didn’t take on the shortcomings of the EPA rules directly, but made the blunt point that to adequately respond to the danger posed by global warming caused by industrial emissions, Monday’s announcement should only be viewed as small portion of what’s needed overall from lawmakers in Washington, DC..

“This is good,” said McKibben of the, “these rules will help advance the obvious tasks of moving America off coal. It’s one of the many things that simply have to happen if we have a chance of catching up with the physics of climate change. Others include rejecting Keystone XL, securing a powerful international agreement, and ending dangerous energy exploration, like fracking and tar sands mining.”

In a joint statement, Wenonah Hauter of Food & Water Watch and Janet Redman from the Institute for Policy Studies, said the plan falls short for several key reasons. First, the targets are just too low. And second, the reliance on a cap-and-trade scheme, which essentially allows utilities and power plant operators to pay-to-pollute, has been proven inadequate at reducing overall emissions and does nothing to help local communities situated in the shadow of those plants. They write:

We applaud the President for using the tools he has available, given that Congress refuses to act, and for setting hard targets for emissions reductions. However, the targets don’t make the U.S. a leader in addressing climate change. Because this rule applies to only one segment of our economy – existing coal-fired power plants – the reduction targets fall far short of the IPCC’s goal for developed countries of economy-wide reductions of 15 to 40 percent below 1990 emission levels by 2020. With the President’s targets, U.S. economy-wide emissions would still be above 1990 levels in 2030.

In addition, by allowing states the option of using cap-and-trade and offsets, the administration has cut the legs out from under its own rule. Carbon trading is designed to benefit big corporate polluters. It lets industry decide for itself how to limit carbon emissions based on profit motive, and makes it cheaper for the dirtiest power plants to simply pay for permits instead of cleaning up pollution.

And Rachel Cleetus, a senior climate economist with the Union of Concerned Scientists, agrees. “While the power plant carbon standard is a tremendous step forward, ultimately we will need to make much deeper cuts in emissions to help limit worsening climate impacts, something the administration cannot do alone,” she said. “Congress must step up and enact legislation that will lead to deep cuts in emissions throughout the economy.”

“This is what good organizing does,” said McKibben, “and more of it will keep the ball rolling. Movement pressure is starting to bring results.”

Going forward, Pica vowed his members at Friends of the Earth will continue to speak out against what he termed Obama’s “misguided all-of-the above” energy policy and said that the best way to do that is to continue the call for “an immediate transition to clean renewable energy” paired with an equally intense demand to keep “as many fossil fuels in the ground as possible.”