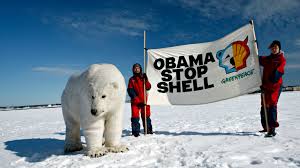 The Obama administration has granted Royal Dutch Shell final approval to resume drilling for oil and gas in the Arctic Ocean for the first time since 2012 despite widespread protests from environmental groups. Shell first obtained drilling permits in the Arctic during the George W. Bush administration, but drilling stopped in 2012 after a series of mishaps. The Interior Department’s decision comes just weeks after a protest in Portland, Oregon, temporarily blocked an Arctic-bound rig of Shell’s from leaving the city after a group of activists from Greenpeace dangled off a bridge, blocking the ship’s movement while “kayaktivists” took to the water below. A coalition of environmental groups have pushed the Obama administration to say no to Arctic drilling, citing the dangers of a possible oil spill in the pristine region and the impact new oil extraction would have on the climate. The Interior Department approved the Arctic drilling ahead of President Obama’s upcoming trip to the Arctic later this month. He mentioned the trip during his recent speech unveiling plan to slash carbon emissions from U.S. power plants.