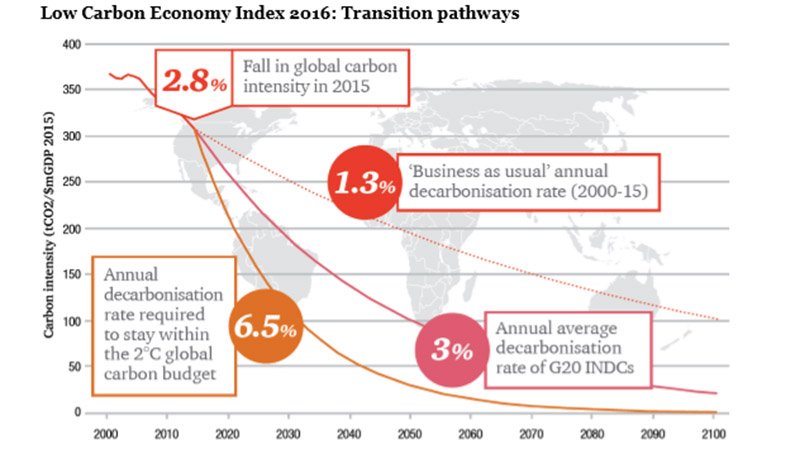 Not Just Transition, But Transformation: the Paris Climate Agreement

The Paris Climate Agreement came into effect November 4th, 2016. More than 90 countries have ratified the deal, which is enough to turn it into international law.

Unions all over the world are trying to anticipate the agreement’s likely impacts and navigate its provisions to advance the interests of working people. Towards that end, a cross section of international labor will be in Marrakech from November 7th-19th calling for a “just transition strategy,” and to press for more ambitious targets and adequate climate financing for the global South.

The International Trade Union Confederation (ITUC) is taking a strong trade union message to the talks. At COP 21 in Paris a year ago, unions fought hard to get a reference to Just Transition into agreement.1 The ITUC sees this as an important first step, but one that must be consolidated at the national level where the Intended Nationally Determined Contributions (INDCs) to reduce emissions will need to be activated. “We know millions of workers and families still depend on a fossil-fuel-based economy for their jobs and livelihoods,” notes the ITUC, “and employers, with workers and their unions must sit together and commit to protect our future through a just transition strategy.”

In terms of what needs to be done, the ITUC statement is clear and strong on a number of key issues. It recognizes the need to move away from fossil fuels and extreme methods of extraction (for example, fracking) noting that, “studies show that at least 80 per cent of current fossil fuel reserves will need to be left in the ground to meet the objectives of the Paris Agreement.” It also recognizes that “The global common good should be given priority over the profits of large fossil fuel companies that continue to promote the use of ever greater quantities of coal, oil and gas.”

The ITUC’s goals have broad support across the international labor community.

Unfortunately, there are exceptions. The fight over the Dakota Access Pipeline (DAPL) in the United States — a fight being led by Standing Rock Sioux and supported by indigenous movements globally — has seen some major building and construction unions openly align themselves with the “export carbon” strategy of the American Petroleum Institute (API). The AFL-CIO also supports the construction of the DAPL. Importantly, the number of unions opposing DAPL and declaring solidarity with Standing Rock Sioux and other tribes has been impressive.2 (See TUED bulletin #51 for more information on unions and DAPL.)

Two indigenous trade union leaders will be speaking about these struggles in Marrakech. (See: Why We’re Going to Marrakech, where TUED’s Irene Shen interviews Ron Rousseau, Aboriginal Vice President for the Canadian Labour Congress and president of the Canadian Union of Postal Workers (CUPW), and Eliza Carboni, an eyewitness to the DAPL fight and a leader of New York’s nurses union, NYSNA.)

In recent days a group of rank and file union members launched Labor for Standing Rock (LSR) and supporters of the group traveled to the Standing Rock Reservation in North Dakota. Registered nurse and UFCW member Cliff Willmeng sent this “there are no jobs on a dead planet” video message on the importance of the DAPL struggle to the fight to protect the climate.

Stopping the expansion of fossil fuel use and infrastructure is a top priority, and not just for climate-related reasons. But, as the ITUC notes, “staying well below 2°C in average temperature increase, and aiming at 1.5°C”, will only be reached if concrete measures are taken to dramatically change our production and consumption patterns.” In late October 2016, Price Waterhouse Coopers’ (PWC) annual Low Carbon Economy Index reported that “carbon intensity” needs to fall at a rate of 6.5% a year, every year, until 2050 in order to stay within 2 degrees Celsius. In 2013, the same report concluded a 5.1% annual reduction was necessary over the same period, and declared then that the 2 degree Celsius target was “ highly unrealistic.” If it was highly unrealistic then, it has clearly not gotten more realistic since.

For Asbjorn Wahl, chair of the Urban Transport Committee if the International Transport Workers Federation (ITF), the need for dramatic change means, “We have an all-out battle on our hands over how to organise society.” In a paper presented at a recent energy democracy meeting in Johannesburg organized at the Global Labour University’s annual conference, Wahl states, “Solutions to the climate crisis do exist. We have most of what is required in terms of technology, knowledge, and competence to avert a climate disaster. It is the power to translate words into action that will pose the greatest challenge…. Democratic and political control of the economy and society is a prerequisite to preventing a climate crisis.” (See TUED’s Maite Llanos’ report on the meeting here)

A Clear Trade Union Policy on Energy is Needed

Given the urgency of the situation, it is unfortunate that the ITUC statement for COP22 uses unclear and ambiguous language about what an energy transition should entail. It states that, “Universal access and democratisation of energy is needed if we are to achieve ambitious climate action…. Energy companies need to be restructured in order to allow for such democratic involvement of those affected and public oversight, including that of workers’ participation.” It is not clear what “restructured” means in this context, and “public oversight” is clearly not the same as public ownership.

At COP20 in Lima in 2014, unions involved with TUED were successful in having a clearer commitment to public ownership included in the ITUC’s statement, which argued, “Democratic ownership of energy is needed if we are to achieve ambitious climate action. Energy, along with other common goods that belong to humanity (air, water), must be brought, administered and kept under public control.” This language was consistent with the resolution passed at the large Rio+20 trade union conference on climate change in June 2012.

The ITUC statement is strong in many key areas, but as a movement we cannot afford to be ambiguous about the need to struggle for full democratic control over global energy systems. This is necessary in order to drive public renewable power at the speed and scale required. In the energy sector, it is hard to imagine how a “just transition” can be achieved without a shift towards public ownership. As difficult as it will be to make this shift actually occur, it pales in comparison to the challenge posed by the “well below 2 degrees” and “net zero emissions” targets that lie at the heart of the Paris Agreement.

1 The preface urges ‘parties’ (meaning governments) to take into account “the imperatives of a just transition of the workforce and the creation of decent work and quality jobs in accordance with nationally defined development priorities.”