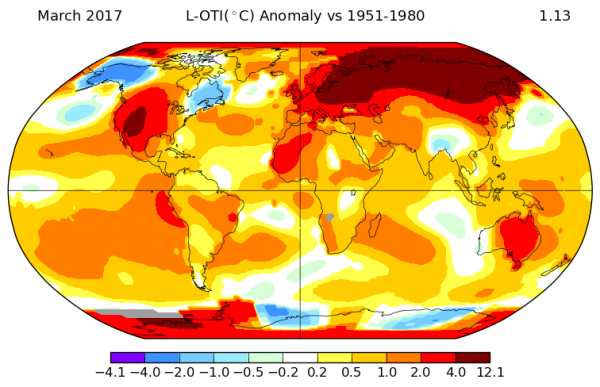 According to today’s report from NASA’s global temperature monitor, March of 2017 was the second hottest such month recorded in the 137 year climate record.

Temperatures for the month were 1.12 C hotter than NASA’s 20th Century baseline and 1.34 C hotter than 1880s averages. These warm temperatures likely represent a climate state not seen on Earth since at least the Eemian climate epoch of 115,000 years ago. They are also now in a range that is producing serious geophysical changes such as glacial melt, sea level rise, sea ice melt, more extreme weather, and declining ocean health.

Much of the excess heat during March, as has been the case with many recent months, has focused at the poles. The northern polar region in particular saw considerable above average temperatures with extreme +4-12 C anomalies focusing over Siberia and the Russian side of the Arctic Ocean. 2-4 C above average conditions, meanwhile, blanketed much of Antarctica.

A key benchmark — sea surface temperatures in the central Equatorial Pacific — remained near average. Typically, warmer than normal temperatures in this region associated with El Nino tend to help push the world to new high temperature marks as the warm side of natural variability combines with the considerable effects of 405 ppm CO2 levels (along with other greenhouse gasses).

But despite near average ocean temperatures in this zone and a lack of El Nino conditions, March of 2017 was just 0.16 C cooler than the record warm March of 2016 and fully 0.2 C warmer than the, now third warmest, March of 2010.

NOAA models still predict that El Nino is about 50 percent likely to form during late summer — which could help to push 2017 temps into an even warmer range. But high uncertainty remains in this forecast. All that said, even without El Nino, the first three months of 2017 have averaged 1.26 C hotter than 1880s averages — which is 0.06 C warmer than the 1.2 C departure for the whole of the record-hot year of 2016. In other words, the first three months of 2017 were a hair hotter than the record hot 2016 annual averages. And with no El Nino providing an assist to these temperatures, it’s pretty clear that the world has entered a new, hot territory and left the tamer past decades far behind.