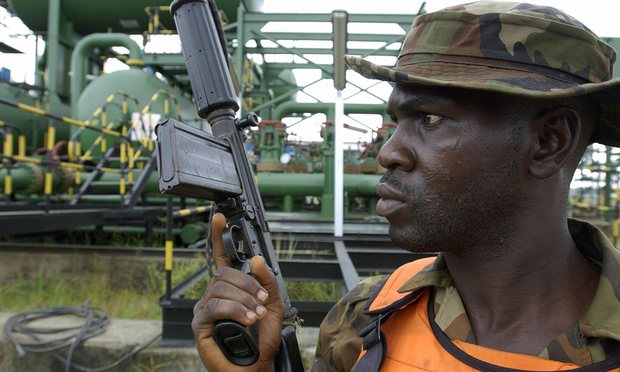 Members of the Nigerian militant group the Niger Delta Avengers have shut down facilities owned by one of the world’s biggest oil companies.

People living near Chevron’s Escravos terminal in the oil-rich southern Nigerian region of the Niger delta reported hearing a loud blast during the night. Chevron confirmed on Thursday morning that the attack, which was on its main electricity power line, had shut down all its onshore activities.

“It is a crude line which means all activities in Chevron are grounded,” a company source told Reuters.

It was the latest in a string of attacks by the Avengers, who have demanded that foreign oil companies leave the Niger delta before the end of the month, and say they are fighting to protect the environment and to win locals a bigger share of the profits.

The group has helped push the country’s oil output to its lowest level in decades. According to Emmanuel Ibe Kachikwu, head of the state-run oil company, the attacks have reduced the number of barrels produced a day from 2.2m to 1.4m. As well as hitting Nigeria’s economy – which, analysts have warned, is headed for a full-blown crisis – the attacks on Africa’s biggest petroleum producer have led to a rise in global oil prices.

The latest attack comes as Nigeria’s president, Muhammadu Buhari, prepares to celebrate a year in office this Sunday. He won the 2015 election on a promise to fight corruption and the bloody conflict waged by the Islamic militant group Boko Haram in the country’s north-east, and took over when Nigeria was in the midst of an economic crisis largely caused by the then falling price of oil, which the government relies on for 70% of its revenue.