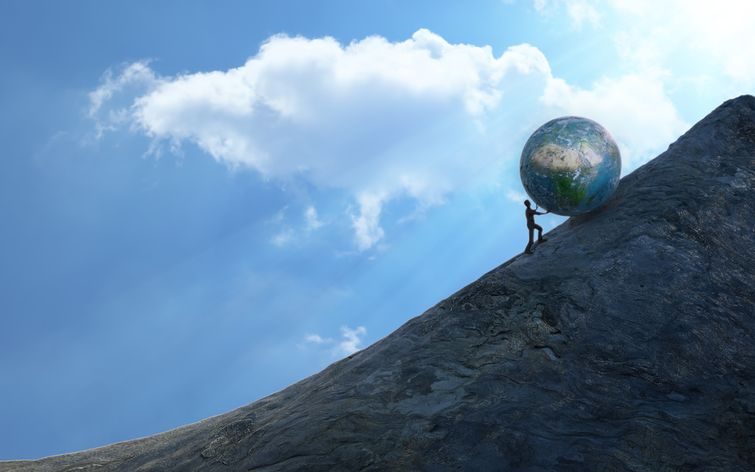 The news on climate is awful. So now what?

Humanity is probably in for some awful shit, or so I argued in my previous post. Specifically, it appears unlikely we’ll be able to limit global average temperature rise to 2° Celsius over pre-industrial levels, the target threshold agreed to, at least notionally, by all 141 countries engaged in the Copenhagen climate accord.

It is still possible to construct scenarios with sufficient emission reductions to stop short of 2°C, with fairly small net impacts on global GDP, but they require increasingly heroic assumptions, like a globally harmonized price on carbon, 4 to 6 percent annual reductions in worldwide emissions over 50 years, and/or several gigatons’ worth of negative emissions later in the century.

When the economic and technological numbers in those scenarios are translated into real-life sociopolitical action, they represent nothing short of a revolution ­ a collective effort on the scale of US mobilization for World War II, in every country of the world, beginning within the next decade, sustained for the remainder of the century.

Look around. There is no such grand mobilization in the offing. Progress on carbon reduction remains fitful and scattered. It is difficult to envision a sudden unanimity around carbon reduction sufficient to see global emissions peak in the next five to 10 years and decline rapidly every year thereafter.

And so the likely outcome at this point is exceeding 2°C.

My post elicited all sorts of interesting responses, over email and Twitter (see also Jonathan Koomey and Dan Lashof). A good number, however, took the form, “So what you’re saying is, [thing I’m not saying].” It seems that lots of issues have gotten lumped together in discussions around the 2°C target, so I thought it would be worth a follow-up to try to tease them apart.

So what you’re saying is there’s no hope

Remember, the main question at hand is not whether 2°C is physically possible but whether it’s sociopolitically feasible, or likely. That is, to say the least, uncertain, and where’s there’s uncertainty there’s always hope.

After all, we’re talking about scenarios that model economic and technological development out to 2100. It’s one thing to predict how the climate system will change over a century ­ climate moves slowly ­ but another entirely to predict human development that far ahead. Social change is non-linear; after periods of relative stasis, societies can lurch to a new equilibrium almost overnight (a pattern known as “punctuated equilibrium”). What will be technologically feasible in 2050, or 2080? What political changes will take place between now and then? We have virtually no idea. So as Koomey says, we can’t know in advance whether 2°C will prove to be feasible. We can’t see the future.

And in general, I agree. I have written in the past about how the integrated assessment models (IAMs) used to create these scenarios contain such a wide array of contestable assumptions, about developments in so far in the future, that it is ludicrous to interpret their results as anything but thought exercises.

There could be a fundamental shift in consciousness and behavior sometime this century. Many people responded to my post by citing the relatively big recent shifts on gay marriage and marijuana as examples.

But … still. Those are mild, passing gusts compared with the mighty wind necessary to blow the entire world economy in a new direction. The shift required to achieve 2°C would have to be enormous ­ utterly without historical precedent ­ and it would have to get underway soon.

Hoping for a fundamental shift in human consciousness and politics in the next 10 to 15 years amounts to hoping for a miracle. That’s what hoping for 2°C means ­ banking on a miracle.

Which is fine. It’s great to have hope! Not that long ago I wrote a whole long post about hope, which came down strongly on the pro-hope side of the debate. (It was popular; you should go read it.)

But particularly when it comes to policymakers and the people advising them, we also need clear-eyed straight talk. “We don’t yet know that 2°C is impossible” is very different from “We’re on track.” The fact is, based on what we know about carbon budgets, path dependence, and status quo bias, changing the fossil fuel energy system fast enough to stay under 2°C appears increasingly unlikely. We are rapidly losing options, and the ones that remain are unrealistic or unpleasant.

So what you’re saying is we should give up

I think the 2°C target has generally been a positive thing (more on that in a minute), but it has led many people to discuss the climate challenge as though it is binary ­ we succeed or fail, solve it or blow it, prevent it or endure it.