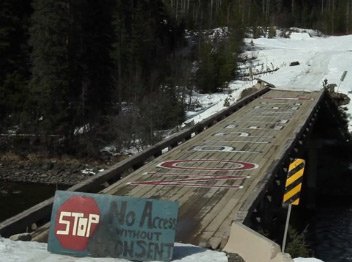 Some Indian bands have signed agreements regarding the Pacific Trail Pipeline, but the Wet’suwet’en hereditary clans claim jurisdiction over their territories, where they demand the right to free, prior and informed consent and the right to say “no” to pipelines. Below is a new video explaining the importance of front line defense against fracked gas and tarsands bitumen featuring Togestiy, an organizer of the Unist’ot’en camp in north central British Columbia. Join the Construction Camp (May 12-30) and the Action Camp (July 16-20) http://unistotencamp.com/

“This idea of signing petitions, of walking peacefully in a peaceful protest downtown is something that is going to make a difference. And sure it makes a difference in terms of people becoming aware, but the majority of people stop there, and think that, that was enough for them to make that difference. But the radical politics that we’re promoting forces people to take it a step farther. Because that old model hasn’t worked. The model that we’re presenting is actually physically making a difference on the ground. We’re hoping people take the time to take their responsibilities on this planet seriously. If you guys get a chance to bring children into this world, you’ll want to give those children the best possible world you can as well as the best education and honestly you’re not going to be able to do that if you stay within institutions within the system. If you offer a world that allows them to see outside of those institutions and outside of colonialism you’ll be doing them a huge favor. This world needs people to be awake.”