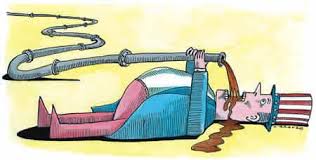 Fossil fuels have two major problems that paint a dim picture for their future energy dominance. These problems are inter-related but still should be discussed separately. First, they cause climate change. We know that, we’ve known it for decades, and we know that continued use of fossil fuels will cause enormous worldwide economic and social consequences.

Second, fossil fuels are expensive. Much of their costs are hidden, however, as subsidies. If people knew how large their subsidies were, there would be a backlash against them from so-called financial conservatives.

A study was just published in the journal World Development that quantifies the amount of subsidies directed toward fossil fuels globally, and the results are shocking. The authors work at the IMF and are well-skilled to quantify the subsidies discussed in the paper.

Let’s give the final numbers and then back up to dig into the details. The subsidies were $4.9 tn in 2013 and they rose to $5.3 tn just two years later. According to the authors, these subsidies are important because first, they promote fossil fuel use which damages the environment. Second, these are fiscally costly. Third, the subsidies discourage investments in energy efficiency and renewable energy that compete with the subsidized fossil fuels. Finally, subsidies are very inefficient means to support low-income households.

With these truths made plain, why haven’t subsidies been eliminated? The answer to that is a bit complicated. Part of the answer to this question is that people do not fully appreciate the costs of fossil fuels to the rest of us. Often we think of them as all gain with no pain.

So what is a subsidy anyway? Well, that too isn’t black and white. Typically, people on the street think of a subsidy as a direct financial cost that result in consumers paying a price that is below the opportunity cost of the product (fossil fuel in this case). However, as pointed out by the authors, a more correct view of the costs would encompass:

not only supply costs but also (most importantly) environmental costs like global warming and deaths from air pollution and taxes applied to consumer goods in general.

The authors argue, persuasively, that this broader view of subsidies is the correct view because they “reflect the gap between consumer prices and economically efficient prices.”