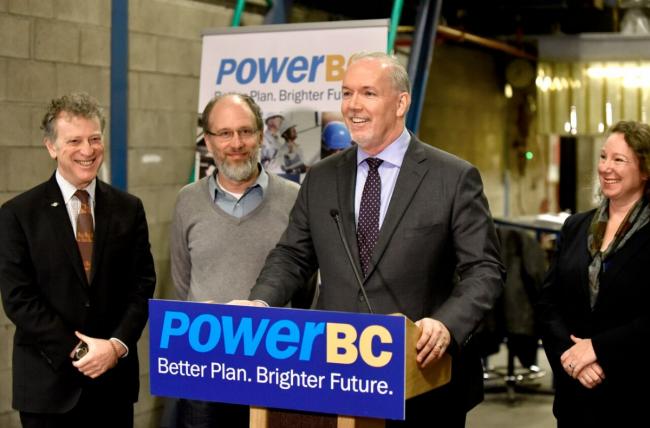 New B.C. government unlikely to be anti-business or impede fracking according to oil and gas producers at forum in Calgary

In spite of any campaign rhetoric, British Columbia’s incoming NDP coalition government is unlikely to impede the practice of hydraulic fracturing in the northeastern part of the province and will not likely assume an anti-industry stance, according to B.C. oil and gas producers at a recent forum in Calgary.

“I have had the pleasure of working in B.C. for 40 years, and I think in that time we had 12 to 16 years of NDP rule, and they always treated the industry relatively well—they haven’t done anything to harm it,” Patrick Ward, president and chief executive officer at Painted Pony Energy Ltd., told TD Securities’s annual oil and gas conference.

The NDP in B.C. is about jobs and education. They have a more socialistic approach, but they are not out to destroy the industry by any means.”

Last week, the province’s Lt.-Gov. Judith Guichon confirmed that she asked NDP Leader John Horgan to form a government in B.C., backed with support by the Green Party, as she accepted the resignation of B.C. Liberal Premier Christy Clark.

According to Dale Shwed, president and CEO at Crew Energy Inc., the NDP likely will not interfere with hydraulic fracturing and he does not anticipate continuation of that industry practice to be in any sort of danger. As for what to expect from the new government that could impact B.C.’s energy sector, he cited water usage and the intention of giving more rights to indigenous peoples.

Shwed said: “From that perspective I would say fracking would be behind these concerns. I think there would be other things that could come into the equation that could affect our  businesses.”

Fortunately for Painted Pony, for economic purposes the company already works to recycle and reuse nearly [REALLY?] all its frac water, and the company works well with its “indigenous partners” in B.C., noted Ward. He believes the province remains a great jurisdiction for his company’s operations, even with the new regime.

“We chose not to be in Alberta for a reason — because we think B.C. is better,” Ward said. “The opportunities there and royalty structure is better, and the regulations are better — you can actually talk to a government official and get things done efficiently.”

David Wilson, president and CEO at Kelt Exploration Ltd., told Thursday’s conference that the NDP in B.C. are not “new to the game” of politics and the party knows the importance of industry.

“We’ll just have to sit back and see what happens,” he said. “I think the reality is we will end up with another election in a year to two years.”

The 2015 NDP victory in Alberta was obviously a worry for the energy sector, Wilson added. However, in that instance the concerns were a bit different than they are with the B.C. election, largely related to the lack of experienced politicians the newly-elected government brought to the Legislature in Edmonton.

“Obviously, that was pretty scary, and at that point we took our money and put it all into B.C. until we figured out what they were going to do with the royalty scheme.”

However, he noted, when Alberta’s NDP government finally unveiled a new oil and gas royalty framework early last year, it was in fact quite favourable for the energy sector. “I’m not pounding the table for the NDP in any fashion, but it is reality that we ended up with the best royalty regime in the world [probably] in Alberta.”

In B.C., Shwed said, both the NDP and Greens oppose the Trans Mountain expansion project, and from an energy perspective dealing with that contentious issue is probably the government’s priority. He suggested someone point out to the provincial government that much of the crude coming off the pipeline in its current form is used within the B.C. Lower Mainland.

There are obviously benefits, and I am not sure that the province or even the people of British Columbia really understand that…. Some of these things have to be made clear, and I believe they will be.”

And if the new B.C. government has any questions with regards to hydraulic fracturing and its environmental impacts, Shwed said his company is happy to answer those. [Emphasis added] [Refer also to: