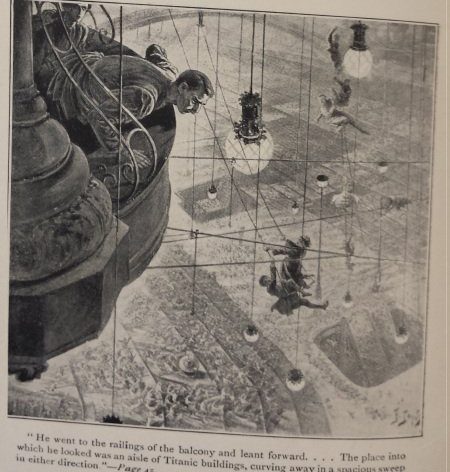 Networked socialism: back to the future

Germany, 1888. Karl Steinmetz, a precociously smart twenty-year old student, quit the university town of Breslau with the police on his heels. Steinmetz had been caught up in the crackdown on the Social Democrats, then Europe’s largest socialist movement by far.

Soon after starting university, Steinmetz joined the socialist club, which was banned after affiliating with the Social Democrats. A previous round of arrests had hit a party newspaper, The People’s Voice, and he took over as editor. Soon afterwards, he wrote an article that was deemed inflammatory, and he had to flee arrest.

Steinmetz emigrated to the US, travelling steerage class (i.e. sleeping in the hold). He anglicised his first name to Charles, and soon found work at a small electrical firm in New York. He became an electrical engineer and by 1893, aged 28, had made a key contribution to the invention of alternating current (AC) transmission equipment, working out mathematical formulae essential to its construction.

The electrical industry was in its infancy: the world’s first power stations had been opened in London and New York eleven years before in 1882. This incredible technology made it possible to produce artificial heat and light of unprecedented quality, and to power new gadgets from irons and radios to fridges. It paved the way for automation of factories, and underpinned the communications revolution of telephone and telegraph. Within a few decades a world without it would seem unthinkable to people in the rich countries.

Steinmetz’s work on AC current was crucial to the system’s growth. With transformers and high-voltage AC transmission lines, electricity could travel long distances, and a patchwork of local networks could be unified into regional or national grids.

When the small company Steinmetz worked for, Eickemeyer, was taken over by General Electric, he moved into senior research jobs and ended up as the head of the engineering consulting department. But his glittering engineering career didn’t lead to him abandoning his socialist ideas. On the contrary, he wrote and spoke about how electricity networks would hasten the arrival of a socialist society.

Steinmetz believed that, because electricity can not be efficiently stored, the network’s expansion would inherently compel producers and consumers to cooperate collectively. This would more rapidly usher a socialist economy into being.

“Implied in this argument was a planned economy, run by technocrats who would engineer this cooperation, by deciding which utilities to interconnect and when industries should consume electricity”, wrote Ronald Kline, Steinmetz’s biographer.[1]

Like many reformist socialists, Steinmetz thought that electrical networks, properly regulated by the state, could help to turn massive capitalist industrial corporations into socialist ones.

Back in Germany, and in Britain – where the welfare of urban workers had become a battlecry for many socialists, and liberals – the “municipal socialists” saw provision of electricity, along with e.g. water and sewage services, as a way for local government to constrain the power of private corporations.

But belief in the progressive potential of technology was in no way limited to the right wing.

The Russian anarchist writer Piotr Kropotkin welcomed (in his 1901 pamphlet Communism and Anarchy) the idea of “socialising consumption” via the municipal supply of water, gas, electricity, bath-houses and other amenities as a step towards communist society.

In 1912, when Kropotkin revised his book on breaking down the division between town and country, Fields, Factories and Workshops, he added passages arguing that the spread of electricity would strengthen small-scale industry against capitalist corporations, and help worker cooperatives that brought together industrial and agricultural work.

The French writer Emile Zola, who had strong sympathies with the workers’ movement, reflected the mood of the times when he wrote that, one day, “electricity will be for everyone, as the waters of the rivers and the wind of heaven”. Electricity “should not merely be supplied, but lavished, that men may use it at their will, as the air they breathe. […] Every home will tap abundant power, heat and light like drawing water from a spring.”[2]

The Bolsheviks who took power in 1917 in Russia believed passionately that electrical networks – which were then limited to a few of the largest cities – were the most important foundation stones of a socialist economy. At the first Communist party congress after the civil war, in 1920, they raised the slogan, “communism equals soviet power plus electrification”.

Gleb Krzhizhanovsky, a Bolshevik who before his arrest and exile for political activity had worked as an engineer on some of the first Russian power stations, headed the state electrification agency Goelro that set about implementing electrification.

When the British writer H.G. Wells met Vladimir Lenin in 1920, the Bolshevik leader enthused about electrification. “Lenin, who like a good orthodox Marxist denounces all ‘Utopians’, has succumbed at last to a Utopia, the Utopia of the electricians”, Wells wrote in his pamphlet Russia in the Shadows.

Wells had a darker view of electricity’s potential than many of his contemporaries. In his futuristic novel When the Sleeper Wakes, he envisaged that electricity networks could allow a powerful technical elite to take control of society and oppress the majority.

A century later, in the midst of another technological revolution, some socialists are again enthusing about technology’s transformative potential. (See my comments on Inventing the Future by Nick Srnicek and Alex Williams here.) And so it would be worth considering what happened to the hopes that socialists invested in electricity.

The short answer is that from the 1880s, when electricity boomed – thanks on one hand to the innovation of cheaper light bulbs and on the other to steam turbine technology for power stations – capitalist corporations sought to make it a commodity.

In the US, those corporations – with a duopoly of General Electric and Westinghouse dominant from 1889 – pushed publicly-owned companies out of local and regional networks, hoovering up electric appliance businesses at one end of the business and manufacturers of power station equipment on the other. The taming of state regulatory bodies by those corporations in the 1920s in the US seems like a blueprint for what banks did to regulators in the run-up to the 2008 financial crisis.

There was resistance to the commodification of electricity, in the first place from the municipal socialists in Europe. Parliamentary politicians in many countries – not only social democrats but also liberals – embraced the idea that electricity, along with other services, should be provided to urban populations as a service, and not marketed as a commodity.

There are plenty of examples of private capital stepping back and yielding the field to the capitalist state, because the initial investment needed to put electricity networks in place was substantial, and in many cases private capital had no appetite for providing it.

In the twentieth century of Keynesian economics and social democratic politics, investment in electrification, and the provision of electricity, was often done by the state. Even in the US, the state funded the electrification of the countryside – which is particularly capital-intensive – during the “New Deal” of the 1930s.

But neither state investment in infrastructure, nor provision of electricity as a service, brought closer a cooperative economy founded on electricity – neither through corporations morphing into socialist trusts, as Steinmetz had hoped, nor by local cooperatives growing stronger at the expense of big industry, as Kropotkin had envisaged.

In the Soviet Union, electrification was carried out in such a way that prioritised industry. Proposals for investment in more, smaller

networks – to stimulate small-scale industry in the countryside and address the yawning gulf between urban and rural economies – were sidelined.[3]

After the second world war, as electrification got underway outside the rich world, every humanist and pro-development argument about taking electricity more systematically in to the countryside, and providing it more equitably as a service to poor urban populations, has been confronted by wave after wave of commodification.

In recent years, optimism about electricity’s progressive potential has been reignited by the revolution in computer and communications technology. New possibilities for managing electrical networks have appeared.

Distributed generation – local networks that unify a much larger number of smaller power sources, including those from renewables – is gaining momentum. Engineers are excited about the possibility of smart meters that can help manage demand, a key element in making electrical systems sustainable.

But the crucial question is: who owns and controls the systems?