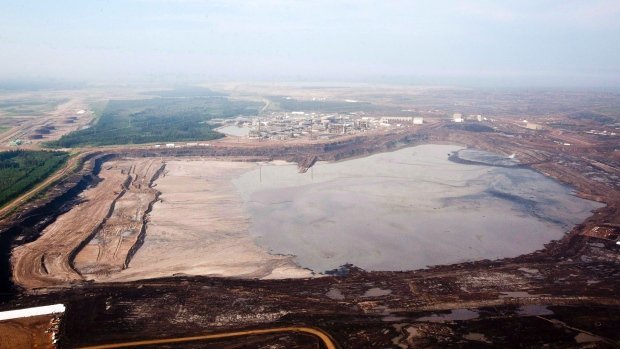 Canada is trying to stop NAFTA’s environmental watchdog from taking a closer look at the environmental effects of the huge tailings ponds produced by Alberta’s oilsands, and it appears Mexico and the U.S. will go along with efforts to stop a formal investigation.

If that happens, it would be the third time in a year Canada has stopped North American Free Trade Agreement scrutiny of its environmental record.

The tailings ponds are a touchy political issue for both the Alberta and Canadian governments. They’ve become a symbol of the environmental footprint of oilsands production. The ponds cover more than 176 square kilometres and contain a toxic mixture of water, clay and chemicals, what’s left over when the oil is removed.

Evidence suggest the ponds are seeping into the nearby ground and water.

‘Through a council resolution in December 2014, Canada, Mexico and the U.S. unanimously voted to terminate the submission’— Danny Kingsberry, Environment Canada spokesman

Two environmental groups and three private citizens from Alberta, Saskatchewan and the N.W.T. want the Commission on Environmental Co-operation to find out whether Canada is breaking its own Federal Fisheries Act by failing to prevent tailings from leaking into the Athabasca River and nearby creeks in northern Alberta.

“It was important for us know whether this was happening and whether environmental laws were being broken and whether the government is upholding those laws or ignoring them,” said Dale Marshall of Environmental Defence, one of the groups that launched the complaint in 2010.