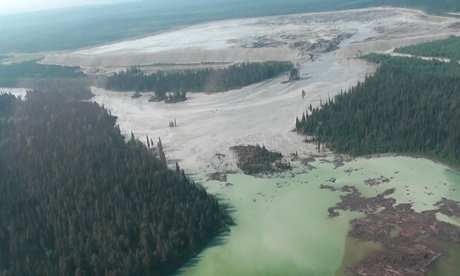 Mount Polley mine spill: a hazard of Canada’s industry-friendly attitude?

The scale of the devastation only became apparent from the air. A dam at a waste pond on the site of a British Columbia open-pit mine had burst, releasing 10m cubic meters of water and 4.5m cubic meters of potentially toxic slurry into virtually untouched forest, lakes and rivers into an area of Canada populated mostly by the indigenous First Nations peoples. Soda Creek First Nations chief Bev Sellars took a helicopter tour to assess the scale of the disaster. “It looked like an avalanche, but avalanches don’t have toxic waste in them,” she said.

Government reports about the incident at the Mount Polley mine on 4 August have been cautiously optimistic, saying the surrounding water is likely safe to drink, and that wildlife will not be significantly impacted by the spill.

But the industry-friendly attitude that has become a hallmark of both the British Columbia and federal governments in Canada over the past decade has led to scepticism. Local activists and residents say they are waiting for data of their own to determine the safety of the surrounding environment. In the meantime, just over a week on from the spill, they are working to determine why it happened in the first place.

“This is a huge operation that breached because the government was negligent and the company was negligent,” said Cayoose Creek First Nations chief Michelle Edwards. “People don’t understand what this is going to do to us up here.”