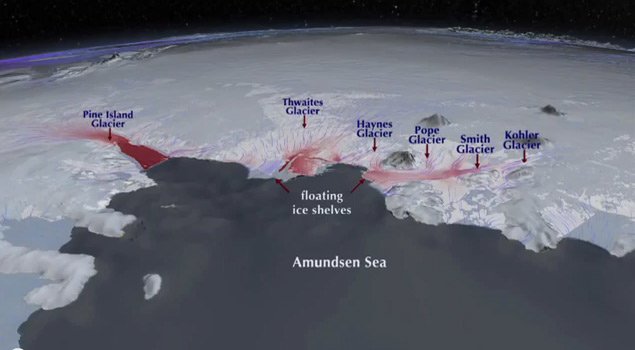 Journalist Dahr Jamail & Professor Peter Wadhams say the resulting release of methane will lead to massive climate disruption, and that we have reached a point of no return.

Peter Wadhams: “The general assumption was that the West Antarctic ice sheet was very stable and we don’t have to worry about the Antarctic ice sheets and for a long time. If they contain most of the fresh water in the world, and if a major part of the ice-sheet did slide off its base, then there would be a gigantic impact on global sea levels. This study predicts four feet if this large chunk of ice in the West Antarctic came off. It is something that is clearly based on very good research. Its something where we might expect it not to happen within the next few years, but climate change at the moment is so catastrophically rapid that something that is going to happen in a few decades perhaps which is very quick in terms of Antarctic glacial history…It shows that global climate change is much more serious that people thought, because people said we don’t have to worry about the Antarctic ice sheet…If the ice sheet did slide off it means a century of sea level rise in one go.”

“Peter, do you think we have past the point of no return in terms of controlling polar ice cap melting?”