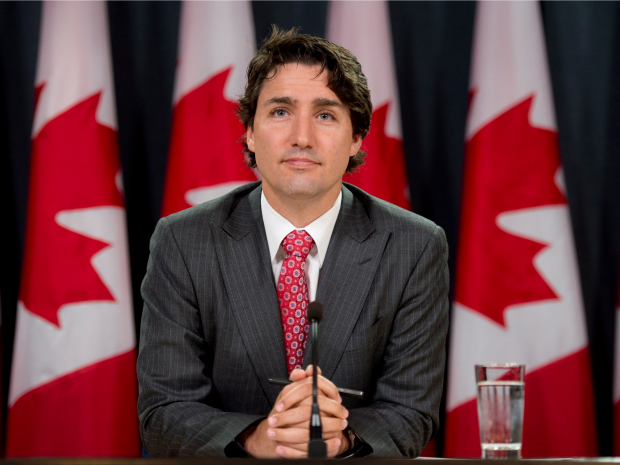 Meet the new boss, same as the old boss

The fresh new face Canada showed the world at the Paris COP21 climate meetings held out hope for many Canadian climate activists that a national course change was in the works.

Prime Minister Trudeau’s political and social capital within Canada’s environmental movement derives largely from distinguishing himself from a Harperite vision of a fossil fuel–driven economy that relies on the decimation of an environmental regulatory apparatus and colonial expansion deeper into First Nation territory.

Trudeau has adopted the same carbon emissions reduction target as Harper: 30 per cent below 2005 levels by 2030, the weakest goals within the G7.

But after many environmental groups — such as Dogwood Initiative, Force of Nature, and Lead Now — campaigned to get the vote out to oust Harper through strategic voting, the results of the election only confirmed the largely bipartisan nature of Canadian plutocracy.

So far, Trudeau has not updated Canada’s environmental assessment process as promised. The Liberals have sponsored a biased ministerial panel to assess both the Trans Mountain and Energy East pipeline expansions.

Canada’s justice minister, Jody Wilson-Raybould, says Canada will embrace the UN Declaration on the Rights of Indigenous Peoples, but that adopting it into Canadian law would be “unworkable.”

Trudeau has adopted the same carbon emissions reduction target as Harper: 30 per cent below 2005 levels by 2030, the weakest goals within the G7. He intends to meet the promises in part by imposing a national carbon price among other policies outlined in a new national climate strategy expected before the end of 2016.

On Monday, Trudeau announced a starting carbon price of $10/tonne beginning in 2018 and increasing to $50/tonne by 2022. Saskatchewan Premier Brad Wall, predictably, cried foul, while Alberta’s Rachel Notley said her government would only support the new federal measures if a new pipeline wereapproved.

Lost in this political debate is that this is no time for half measures and false solutions. Carbon pricing and other market mechanisms have, in fact, always been a false solution. In a recent article entitled “Why We Need a Carbon Tax, And Why It Won’t Be Enough,” leading environmentalist Bill McKibben makes the case that climate fight, rather than mere market tinkering, is what is really required, akin to a “war” in which all resources at every level of society are need to be mobilized.

For all those hopeful about the introduction of nation-wide carbon pricing, here’s the news: The market can’t solve the climate crisis. Neither superficial tinkering with the market nor the bottoming-out of the extreme fossil fuel energy economy will on its own usher in the new energy economy.

Capitalism vs. the planet “The project of sustainable capitalism based on carbon taxes, green marketing, ‘dematerialization’ and so forth was misconceived and doomed from the start because maximizing profit and saving the planet are inherently in conflict and cannot be systematically aligned even if, here and there, they might coincide for a moment.” – Richard Smith, “Green capitalism: The God that Failed,” Truth-out.org.

China is not abandoning fossil fuels, but is presently ramping up its predatory acquisitions in the Canadian oil and gas industries. It has been doing so recently by targeting companies on the verge of bankruptcy due to the fall in oil prices.

George Carlin’s remark that “bullshit is the glue that binds us as a nation” has never been truer in the Canadian context. Naomi Klein, writing in the Globe and Mail, summed things up: “A lot has changed: a new federal government, a new international reputation, a new tone around First Nations and the environment. But when it comes to concrete action on lowering emissions and respecting land rights, much remains the same.”

During his electoral honeymoon, Trudeau has cunningly navigated the waters of public relations, using rhetoric that attempts to appease both sides. It’s all a matter of balancing “short-term economic goals and longer-term environmental ones,” argues an editorial in Canada’s largest daily. But building more gas, oil, and coal infrastructure is scientifically incompatible with Canada’s climate change commitments, not to mention ecological survival itself, as explained in a recent report by Oil Change International that provides ample scientific evidence.

Calling Trudeau’s bluff, and leaving no room for ambiguity, over 70 First Nations have just signed onto a new treaty alliance to stop the expansion of Alberta’s tar sands. The treaty’s signatories promise to mobilize communities in the routes of five major planned pipeline expansions. Inspired by the historic stand by the Standing Rock Sioux, who have been supported by 200 Indigenous tribes protesting the building of the Dakota Access Pipeline, this Indigenous tar sands treaty could be Trudeau’s worst nightmare.

This initiative, along with the abiding radicalism of numerous individual frontline First Nations land defenders, is a loud corrective to the ambivalence of “progressive” Canadian political parties and environmental NGO collaborators. (See this clip of a BBC Hardtalk interview with a representative of Alberta’s “left-wing” NDP government.)

Equally unambiguous are the multiple, dispersed actions that together make up the rest of the movement known as Blockadia. One recent example is the protests in Montreal that shut down a National Energy Board meeting on the Energy East pipeline, leading to the suspension of the hearings and the recusal of all three commissioners due to perceived conflicts of interest.

The agenda of the Liberal government is based firmly in the logic of a neoliberal order.

Other examples abound, including the struggle on Burnaby Mountain against Kinder Morgan, the Toronto Line 9 protests, the Mi’kmaq anti-fracking protests, the “kayaktivist” events sponsored by 350.org and Greenpeace, the Site C protests, and the ongoing First Nations land defence at Unist’ot’en, Madii ‘Lii, Lelu Island and Sutikalh.

Also impressive and potentially consequential are the new political formations that may arise from initiatives such as the Leap Manifesto, which has rocked the Canadian political scene by threatening a schism within Canada’s third (and traditionally nominally socialist) party and shows signs of gaining traction within the wider political culture.

The Manifesto has been endorsed to some degree within the labour movement and has helped inspire new formations such as Iron and Earth, an initiative led by oil sands workers building on the “One Million Climate Jobs” campaign to encourage growth of the renewable energy sector and retraining of workers for a variety of renewable trades.

The Canadian Union of Postal Workers has a new vision for the national post office, where workers have been under threat since the previous Harper government, the elimination of 8,000 door-to-door delivery union jobs in 2013, and more structural changes to the economy, particularly the digital communications revolution. The project envisions Canada Post as a green hub providing community economic development and social care along with postal banking.

“And the world looks just the same / And history ain’t changed / ‘Cause the banners, they are flown in the next war.” – The Who, “Won’t Get Fooled Again.”

Clues to the failure of Trudeau to live up to his professed image should be looked for in the themes broached in Klein’s book,This Changes Everything: Capitalism vs. the Climate. The agenda of the Liberal government is based firmly in the logic of a neoliberal order, with the unavoidable structural economic imperatives and expansionist capitalist and colonial dynamic.

Only a movement of people power and direct action fighting in the streets at the points of extraction, production and transportation can lead the challenge to fight those imperatives. My recommendation: don’t count on a new Liberal environmental saviour, but start the struggle where you left off with Harper. Pick up your guitar and play — just like yesterday!