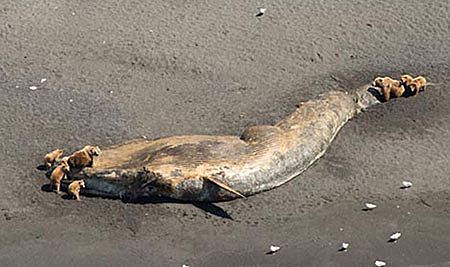 Something lurking in the Northeastern Pacific is killing off the graceful giants of the world’s oceans. For since May of 2015 30 large whales have been discovered dead — their bloated and decaying bodies washed up on Alaskan shores. It’s an unusual mortality event featuring a death rate of nearly 400 percent above the average. So far, scientists don’t yet have a culprit. But there is a prime suspect and it’s one that’s linked to climate change.

This month the US government declared an ‘unusual mortality event’ after it was confirmed that 30 large whales including 11 finback whales, 14 humpback whales, one gray whale and four other whales so bad off it that spotters where unable to identify the bodies by type were found dead. For large whales, whose numbers tend to be low due to size, low birth rates, and dietary requirements, that’s a very rapid mortality rate. As a comparison, all of 2014 only featured four large whale deaths in the Gulf of Alaska.

According to an official statement from NOAA:

“NOAA Fisheries scientists and partners are very concerned about the large number of whales stranding in the western Gulf of Alaska in recent months… To date, this brings the large whale strandings for this region to almost three times the historical average.”

Starting an official investigation of this odd large marine mammal mortality event shows that scientists are somewhat baffled about what could have caused the tragic deaths of these majestic creatures. But the scientists’ investigation is not absent a suspect. For the emergence of extraordinarily warm ocean water in a region where these whales live has been linked to a number of mass sea creature die offs.

This area — an expansive zone of 1 to 5 degree Celsius hotter than average surface waters — has been implicated in the mass death of starfish, in dolphin mortality events, in sea lion mortality and orphaning events, in sea otter deaths, in salmon deaths, and in the mass death of crabs and shellfish (see “Starving Sea Lion Pups and Liquified Starfish” and “Hot Pacific Ocean Runs Bloody“).

(A combination of factors related to human-caused climate change have forced the Northeastern Pacific into a period of record warmth. First, sea ice recession in the Arctic has enabled the formation of warm ridges in the Jet Stream over this region. Second, ocean waters are globally hotter than they’ve been in at least 135 years. Third, a switch to positive PDO and El Nino in the Pacific has unlocked an unprecedented degree of ocean heat forced into Pacific waters by record strong trade winds throughout the 2000s. As a result, the typical positive PDO signal is amplified. In other words, as Dr. Kevin Trenberth has warned time and again, deep ocean warming is coming back to haunt us. Image source: NOAA/ESRL.)

Abnormally warm waters fertilized by the particulate fallout from fossil fuel based industry and climate change driven wildfires can create a host of problems for sea life. First, the warmer waters contain lower levels of oxygen — which reduces the range in which fish and crustaceans can live. Hotter, lower oxygen and zero oxygen waters also create zones and regions in which toxic microbial life thrive. We’ve talked a lot about the deadly hydrogen sulfide producing bacteria. But the expansive algae blooms of a warming, nutrient enriched ocean surface can produce a host of other toxins. Microcystins, Nodularins, Anatoxin-a, Cylindrospermopsins, Lyngbyatoxin-a, Saxitoxin, Lipopolysaccharides, Aplysiatoxins, BMAA, Hydrogen Sulfide Gas and Domoic Acid are just some of the toxins produced by algae and bacteria that thrive in warming waters, in low oxygen waters, or in waters that have been subject to high nutrient loading from increasing run-off and the fallout of nitrogen and particulates due to fossil fuel burning.

In particular, this year’s record red tide has resulted in an extreme outbreak of the kind of algae that produce the deadly neurotoxin — domoic acid.  And it’s this domoic acid poisoning that many are pointing to as a possible cause of excessive whale deaths.

(Whale stranding locations along an abnormally warm Gulf of Alaska. Strandings may be associated to a global warming-tied blob of hot water in the Northeastern Pacific together with a related red tide algae bloom impacting the region. Image source: NOAA.)

The massive algae bloom impacting regions of the Northeast Pacific threatens whales in a number of ways. First, the whales swim in the algae-filled waters. So the toxin is a part of their environment. It thus becomes unavoidable. The toxin concentrates in the bodies of the tiny sea creatures upon which the whales feed — planktonic life forms that, in their turn, feed on the toxin-laden algae. As domoic acid moves up the food chain, it bio-magnifies — becoming more concentrated. And since whales must consume prodigious volumes of small sea life to survive, the opportunity for biomagnification of toxins in whales is great.

Biomagnification of domoic acid is also a threat to human beings. And it is for this reason that the US Fisheries Services have curtailed the consumption of West Coast shellfish, which can contain high concentrations of domoic acid from 2015’s record red tide.

Mass whale deaths and strandings along the Alaskan coastline have, over recent weeks, garnered a great deal of attention from the public. However, these strandings and deaths do not occur in isolation. The tragic and freakish mortality events are happening in a region of abnormally hot water. A region of hot water that scientists have linked to human-forced climate change. An area in which numerous other mass sea creature deaths have occurred.

The region features low oxygen waters. Waters infected by deadly microbes that have liquified starfish, crabs, and sea cucumbers. And waters that now feature the largest red tide — a massive bloom of toxic algae — on record. It should be very clear from all these related events occurring within the same region of abnormally hot water that a warming ocean is an increasingly deadly ocean. And if we are to have any hope of halting these events, we should look to cessation of fossil fuel burning and related human forced warming of the Earth System as rapidly as possible.

(Please support public, non-special interest based, science like the fantastic efforts conducted by the fisheries and ocean researchers at NOAA.)