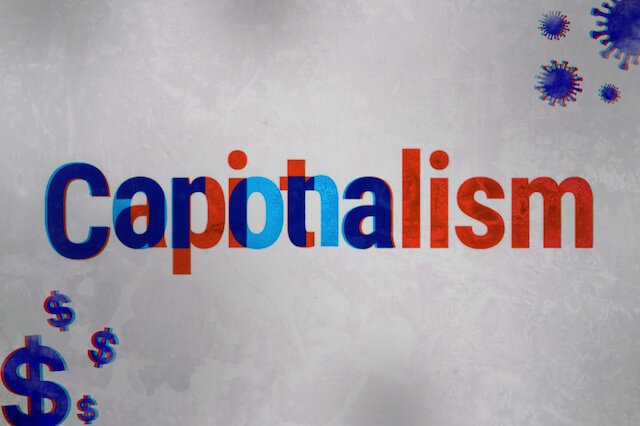 We live in an era of plagues because of capitalist development, argues socialist author Mike Davis. In this transcript from a conversation streamed live on April 11, 2020, Davis also says coronavirus has exposed the gap between a tiny rich elite and the rest of us—creating space to put forward socialist ideas.

The monster that’s stepped through our door could not be more familiar—we’ve known about it for more than 20 years. On paper at least, virtually every year, world leaders are warned by the scientific community that there is an imminent threat of pandemic.

It was also pointed out that the ­private pharmaceutical sector would be unable to supply the anti-virals and the vaccines that would be needed.

First of all, it no longer creates jobs. It’s made a billion people or more totally surplus to the needs of globalised production.

The majority of people in urban Africa and urban Latin America work in the informal sector, and that’s basically the only sector in which jobs are created.

Second is climate change. Capitalism has propelled us to an entirely new geological epic, and climate change has enormous consequences for disease.

For instance, with global warming, the key insects of disease for malaria, dengue fever and so on are moving northward. You’ll see the reappearance of malaria for example in Europe, which is almost inevitable.

And thirdly, capitalism threatens our survival because it directly unleashes, and directly produces, the kind of ­pandemics that we’re in the middle of now.

This isn’t just a single pandemic—we live in an age of pandemics and emerging diseases. Capitalist globalisation has produced these new plagues.

Capitalism has destroyed the natural and social boundaries between humans and wild animals populations that ­formerly have been very separated.

Coronaviruses are mainly found in bats. Bats are incredibly reclusive—it takes a lot to bring humans into contact with bats, or animals infected by them. The driving force of that has been the destruction of tropical forests by multinational logging companies, for instance clearance on a huge scale of the Amazon.

Then there’s factory farming, and the industrialisation of production of poultry and livestock.

You’ll find chicken plants that process a million chickens a year. These are like particle accelerators for viral diseases. You could not design a machine that is more efficient at breeding new hybrids of viruses and distributing them.

And the most important factor of all is that, in an immunological sense, there are two humanities. One humanity is well-fed, is generally in good health and has access to medicine.

There’s a second humanity, which depends on medical systems that were in large part destroyed in the 1980s and 1990s.

The systems were destroyed by debt, structural adjustment and the International Monetary Fund’s demand that countries reduce public sending or privatise public services.

All through sub-Saharan Africa and in other countries as well, sanitation is the single biggest source of vulnerability to infectious disease. People don’t have access to clean water and can’t wash their hands with soap every hour.

Right now we stand at the edge of what could be the real massacre of this pandemic as it explodes in the slums of the Global South. It’s impossible to imagine this as something like an ­asteroid coming and hitting the Earth—this is a manufactured pandemic. In the past capitalism, particularly global capitalism, depended on a modicum of investment in disease ­detection and early warning systems.

This was to safeguard trade and ­safeguard people’s health in the ­northern colonialist countries.

A whole series of international sanitary conferences emerged out of late Victorian imperialism. Their explicit aim was to control infectious diseases in order Similarly the World Health Organisation (WHO) in 1948 was founded by the Rockefeller Foundation, which played an essential role in the 1940s and 1950s.

Its concern originally was to safeguard the health of the plantation workers on the United Fruit Company plantations and in Chilean nitrate mines. It wanted to eliminate the disease itself using vaccinations. This proved to be incredibly successful in eliminating smallpox but failed in ­virtually every other major disease.

But there is an alternative tradition—one that looks at the socioeconomic ­determinants—poverty, lack of sanitation and so on. Now all the international infrastructure of disease detection and international coordinated response has just fallen apart.

The WHO has virtually collapsed—it has an absolutely marginal role. It’s never been funded. Big countries like the US have never honoured the ­contributions they said they would make. The WHO has had to turn mainly to lobbying the most powerful countries and relying on philanthropists.

All this together provides about 80 percent of its budget. And it puts the WHO in a position where it’s constantly engaged in ­flattery and solicitation of the US, China and philanthropists. This has become almost ludicrously evident over the last four or five months.

The American Centre for Disease Control (CDC)—which plays a international role and is responsible for much detection of emerging diseases—has collapsed too.

It decided not to use the test kits that had been developed by a German pharmaceutical company that everyone else in the world is using. And it developed its own test kit, but it was flawed and gave out false results.

The CDC is funded by a right wing fundamentalist Christian and its budget was savagely cut by Donald Trump—one of his first acts as president.

The very moment of Trump’s inauguration, he starts to dismantle the organisations and reverse the policies that have been specifically created to deal with pandemics.

Trump says this is the most technically and scientifically advanced country in the world on the same day the New York Times magazine prints instructions on how to sew your own surgical mask.

And it’s a worldwide crisis.

The European Centre for Disease Control has been nowhere and the whole idea of the European Union is in deep crisis. For instance, there was an expectation from Italy that their European sisters would rush aid to them. But instead Germany, Austria and France prohibited the export of crucial supplies and materials.

China exudes enormous economic influence and has shaped the world economy over the last 20 years. But what China has lacked and is most ­desperately seeking is soft power and more political prestige.

Trump has totally abdicated any concept of American moral leadership or humanitarian response. So the Italians turned to Beijing, which has been at the forefront of providing crucial aid.

China has brought an immense capacity to provide key medical supplies. So it’s everywhere on the ground, where Europe and the US are missing.

In the 17th century plagues, particularly in Italy, accelerated the transition from a Mediterranean-centred economy to a North Atlantic-centred economy.

So we have to ask if Covid-19 will start accelerating a change from US hegemony to Chinese hegemony.

The response to the outbreak has been totally nationalist, to the extent that it’s surprised most of the world leaders and the nationalists ­themselves. International co-operation has collapsed.

Any recovery of globalised production depends on huge new efforts to create an international disease infrastructure. This could take the position to attack the pathogen and ignore the social ­conditions that make people vulnerable—that in some ways are the ­ultimate causes of disease.

But it cannot bring on the vaccine and the anti-virals. So far the private sector has been an immense obstacle to the conversion of the new technologies.

The potential for biological design and scientific ­development has been blocked.

This is because the pharmaceutical industry no longer produces the ­lifeline medicines whose production in the past has been their justification for their monopoly position.

They don’t make anti-virals, and for the large part they don’t make vaccines. And they don’t produce the new generation of antibiotics to face the global crisis. Big Pharma is basically trawling patents and spending more on advertising than on research and development.

They’ve become not only a fetter on the medical revolution and scientific revolution but have also engaged in price gouging and enormous political ­lobbying against generic drugs.

Can global capital overcome its ­current nationalist fragmentation and create an infrastructure to deal with its major interests, the continuity of profits and globalised production?

It also has to meet the health needs of the metropolitan populations because this a global depression. And a depression whose roots are not in disease itself—although the disease has ­detonated it.

The major capitalist countries believe they can protect themselves in world trade, through accelerated development of vaccines and some new form of ­international public health organisation.

As long as they believe that there’s absolutely no interest whatsoever in dealing with what’s always the topic of the social medicine—misery and poverty on a world scale.

Will vaccines be available to all the populations of Africa and South Asia? It’s hard to see any reason why they will be, and if they’re available they’ll come years later. Here we see global ­capitalism further deepening and widening the abyss between the two humanities.

Of course that’s true inside other countries as well, where disease is contorted by the legacy of racism and poverty.

I think that right now, at least in the US, there is an extraordinary opportunity not only to advance a progressive agenda—health care as a human right and European-style universal ­coverage. But also to put forward demands that are essentially socialist, like to eliminate Big Pharma and nationalise big production of medicine.

For instance, Amazon is emerging into the biggest monopoly in world ­history. It’s now arguing that it’s an essential utility and the progressive response to that is to break it up or tax it. But it creates a field in which we can raise the traditional socialist demand—make it a public utility. It should be democratically controlled and owned by society.

This crisis offers new opportunities to go beyond left reformism and raise socialist ideas and demands.

Mike Davis is a Marxist author who writes about human geography, history, and the environment. Mike was speaking at ‘Marxism in the age of catastrophe’ alongside Alex Callinicos. Footage of the meeting can be found at bit.ly/MarxismMikeDavis