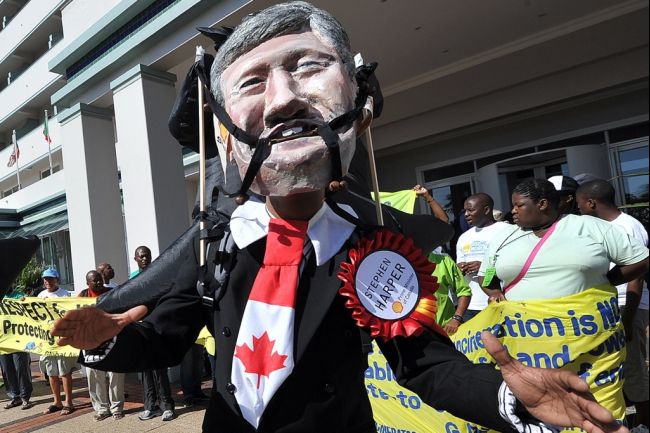 Mark Jaccard and climate solutions through carbon pricing: “If only Harper were more honest”!

Mark Jaccard yesterday said he is “horribly let down” by Prime Minister Stephan Harper’s failure to “competently” enact emissions regulations in 2007 which would have kept his Kyoto Protocol promises on track to 2020. Harper himself, Jaccard says, formally withdrew from the Kyoto processes while charging the previous Liberal government with “incompetence” in neglecting to set in motion adequate policies to reach Kyoto goals.

Jaccard then explains what would happen presently if Harper were to keep his earlier promise. Instead of a graduated increase in carbon pricing leading to positive policy changes (Jaccard’s climate solution tool of choice), meeting the same goals would presently require a “frantic” shock treatment with much tougher regulations that “would crash the economy”.

Consequently, we have now missed the opportunity of phasing out coal plants, shifting transportation and new employment towards alternative fuels, slowing down the growth of the oil sands, and no less than the prevention of both Keystone XL and Northern Gateway, argues Jaccard.

Oh, that’s too bad. If only Harper were more honest!

Jaccard’s depiction of Harper’s duplicity in terms of the issue competence is telling. In the instrumental rationality of the professional climate policy-wonk world, “solutions” to climate crisis are simply a matter of optimal technical management. Unfortunately, Jaccard’s market-based policy-orientation neglects the much deeper analysis of Canadian fossil fuel political economy.

Alternatively, in a recently published article in Studies in Political Economy, Robert MacNeil argues that the reigning Conservative government’s “ardently neoliberal posture” corresponds to a structural shift in the composition of the Canadian economy. The revival of Canada’s historic emphasis on the “staple resource bias”, says MacNeil “creates a structural compulsion to actively assist capital in unfettered access to natural resources”.

MacNeil argues that this overarching economic context is the clue to understanding the state’s radically reconfigured approach to environmental regulation. A national economic model emphasizing resource extraction and unprocessed exports as opposed to the promotion of mature secondary economic sectors that support strong value-added manufacturing industry and high-tech capacity brings with an inclination towards a very specific approach to environmental policy.

In other words, Harper’s environmental actions have a logically consistency, although they may seem out-of-sync with ‘Canadian values”. MacNeil argues his actions are enabled by the Conservative electoral strategy which is to effectively bypass every progressive riding in the country while counting on its Western Canadian and suburban Toronto riding support – or those that gain most from intensive resource development.

In the past, the Canadian state’s role was to appease environmental concerns as a “contesting social force” by “neutralizing, co-opting, integrating and absorbing” them into business-as-usual capitalist accumulation processes. But the Canadian state no longer needs to seek legitimacy through an “environmental regulatory apparatus” which builds social consent and “blunt[s] the radical edge” of the environmental movement causing it to “cast off its radical social movement roots in order to work within the political system”.

The state’s role in legitimizing accumulation through regulation with “second wave environmentalism” once performed an important service to capital. While presenting a challenge to the profitability of individual capital –in this case large fossil fuel interests– regulations served the interests of capital-as-a-whole by absorbing the contesting pulse of the environmental movement into safe institutionalized channels. (Mainstream environmental organizations please take note!)

This scenario has been overtaken by a new cynical and open class war. “Rogue, reckless, petro-state” is how Andrew Nikiforuk recently described the “new” Canada. “Canada’s government has taken up with pipeline evangelists, petroleum bullies and climate change skeptics. Turns out” says Nikiforuk, “the Boy Scout’s not just hooked on junk crude – he’s become a pusher”. The reason is that there are profits to be had: $120 billion in rent and royalties will go directly to the federal government by 2020.

Harper has gone on the offensive. The Canadian Revenue Agency has been put to the service of harassing environmental charities. New anti-terrorist legislation now lumps environmentalist and First Nations activists with “extremists” and “terrorist” national security threats. Climate scientists are muzzled, and major environmental laws (through for instance, the Canadian Environmental Assessment Act) have been systematically extinguished. Kyoto is now defined by Harper as a “socialist scheme” as Nikiforuk comments.

And all this is just Harper’s disgraceful record on just the environmental front. There are many more examples of coinciding regressive and reactionary social policy. The point is, the Canadian Right, just like the U.S. Republicans have put much effort into molding the fabric… the infrastructure that makes certain policy-orientations become inevitable.

Environmental opposition of the soft, liberal, market-focused kind of which Jaccard has been an important British Columbia component is left in the dust with this political turn. Clearly, his activities now fall into the same category for the Conservatives, as the more “radical” grassroots direct opposition to fossil fuel capitalism. Each is disrespected either as trivial annoyance, or dangerous threats that require undermining.

Harper’s politics doesn’t just derail policy positions on surface level environmental agreements like Kyoto. They more profoundly undermine the traditional populist and nationalist Left block in Canada –including the NDP, labour unions, and organizations like the CCPA and the Council of Canadians– that were at least at one time an ideological bulwark against the structural economic underdevelopment of a resource led Canadian industrial policy.

Yes, the Kyoto Protocol processes deserve concerted attention. But the real work that needs to be done is to radicalize and re-coalesce political blocks to fight against the billions of dollars in direct and indirect subsidies to the oil, gas and coal industries. It is to challenge the de facto social and economic disciplining via undemocratic closet deals such as the Trans Pacific Partnership whose effect is to lock-in neoliberal rules for global economic transactions.

But the radicalization of the Canadian Left needs to go much further.

Within the empirical reality defined by climate science, the aims of the historic political block of the Canadian left and its progressive industrial policy must now come into question. The Left’s populist and nationalist advocacy of a job-creating value-added industrial policy guided by “responsible” resource development no longer works.

Endless growth in industrial production is no longer tenable in a world of runaway climate change, surging levels of CO2 in the atmosphere, and most terrifyingly, amplifying positive feedback releases of Arctic methane which are presently triggering massive changes to the world’s life-support ecosystems.

We are now in an emergency situation where progressive business, labour, First Nations and environmental activists must call into question capitalist development itself and embark on a urgent path of economic contraction. The generally agreed-upon necessity of limiting carbon emissions by 80% within the coming years requires the immediate halt of most of (or all) fossil fuel extraction today.

Radical demands such as the dismantling of the fossil fuel economy; a reversal of the ‘growth’ logic of the capitalist imperative and instead a rapid movement towards economic contraction; a concerted critique of the hype around greenwashed “solutions” are now the issues on the table. These and any more actions that generally reflect urgency of our situation must be put at the forefront of the Canadian Left’s agenda.

The same climate science that Jaccard refers to and that likely animates his own passion, increasingly provides evidence that we are already past the threshold tipping points of runaway climate change. Jaccard is right arguing for designing a path towards Kyoto compliance, but he falls very short of identifying the structural inertia that comes into play that limits discretionary decision-making, especially in the context of the massive challenges that are required.

Stephan Harper has both commandeered this ship and is now also at its mercy. He will not and cannot change course voluntarily. Instead of implementing new infrastructural changes within Canadian society and economy that lead to Kyoto compliance, Harper has intentionally carried out massive new policies consistent with global forces of capital accumulation that require the fundamental redefinition of the role of environmental regulation.

This right-wing and class offensive to restructure the composition of the Canadian economy is meant to effectively tie our hands as activists to a particular kind of business-as-usual future. The result is unfortunately, long-term economic decay for working people as well as catastrophic climate crisis. This is the celebrated Conservative revolution championed by the new Western-based business class.

Jaccard’s good heart wants to appeal to something of the same in Stephan Harper, as if shaming him personally and drawing out personal contradictions may change the course of environmental policy. What is really needed, however, is collective strategy, organization and sacrifice through challenging corporate hegemony at the points of fossil fuel extraction, production and transportation.

Let’s all encourage Mark Jaccard to return to his heroic civil disobedience stand on the coal train railway tracks in 2012.