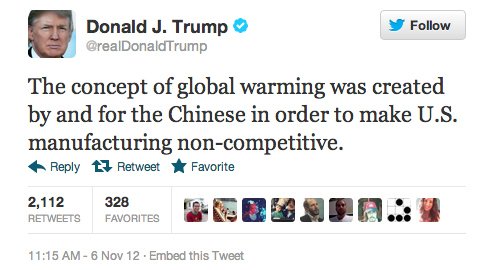 Making America first in climate denialism: Trump withdraws the US from the struggle against global warming (part one

On Thursday, June 1, Trump announced that he will withdraw the United States from the Paris Accord on climate change. This is the accord stemming from the UN Climate Summit of December 2015 in Paris. From day one of his presidency, Trump has been doing his best to roll back any environmental protections, and the withdrawal from the Paris Accord is his overall declaration of climate change denialism.

Of course, Trump did say that he was open to renegotiating the Paris Accord or taking part in a new one. But based on his complaints about the Paris Accord, the new treaty would have to have the following provisions:

It’s no wonder that no one took this proposal seriously.

Trump’s withdrawal has already met with widespread condemnation, and a number of modest-sized mass protests. It may become a new focal point of mass resistance. It is another chapter in a movement that already saw in April the March for Science on Earth Day and the People’s Climate March.

These broad protests against Trump bring together a number of different trends, from bourgeois trends to militant activists. The defense of the Paris Accord by establishment figures generally glorifies the weak measures taken by various government and the green declarations of polluting corporations.

But if large protests develop, this serves the interest of the overall environmental movement. It may help spread consciousness of the urgency of the problem to yet wider masses.

But while taking part in the overall movement, it’s also important to help build up a militant pole inside it. It’s important to talk about the need for mass struggle. Matters can’t be left in the hands of the pro-business politicians and the polluting corporations, who may say they support the Paris Accord while they lobby for the right to drill more oil and gas wells.

Trump’s withdrawal from the Paris Accord shows, if anything, the need for the masses to take matters into their own hands.

There is already a discussion beginning among activists of how to react to this new phase of the struggle. These discussion tend to focus among tactics, but they should also look more deeply into the question of what measures are needed. This is important to develop a strong working-class trend in the environmental movement.

The nature of the Paris Accord

The importance of denouncing Trump’s withdrawal form the Paris Accord isn’t that this Accord is very good. It’s actually a flop: pretty words masking an inability to agree on serious measures. The governments and bourgeoisie have lauded it to the sky, but back when the Paris Accord was first hammered out, many environmentalists, such as James Hansen, were horrified by its provisions.

For that matter, today a number of commentators say that Trump didn’t have to withdraw from the Paris Accord: the Accord doesn’t require any country to do anything but present it’s own plan with whatever goals it sees fit to adopt.

Some media commentators are saying that it really won’t matter so much that Trump is withdrawing from the Accord. Why, market measures are supposedly already bringing down greenhouse emissions. But if you listen carefully, they are generally promoting natural gas. And yet the extraction of natural gas (mainly done through “fracking”) is destroying the land and poisoning our water, and leakage of methane from natural gas wells and pipelines makes a mockery of the supposed decrease in greenhouse gas emissions.

Other commentators are saying that large numbers of cities and states as already quite green. It’s surprising, though, that lead poisoning, a problem known to the cities and states for decades, is still so prevalent, if states and cities are already allegedly so vigilant. What we often see is things like the Detroit City Council saying that, oh yes, it opposes the increased bringing of toxic and radioactive wastes into the city for processing, but its hands are tied. It can’t really stop this, it can just negotiate with the companies for more blood money.

No, we need a struggle against greenhouse gas emissions that goes well beyond what the Paris Accord called for, or the measures being taken in some localities. Mass protest is particularly important. But the more that serious measures are popularized at these events and among the masses generally, the more effective the environmental movement will be. Among the issues that should be raised are the following: