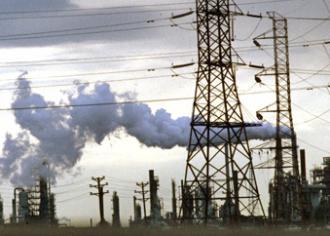 Chris Williams, author of Ecology and Socialism: Solutions to Capitalist Ecological Crisis, reports on studies showing that climate change is even worse than we thought.

“I think I have said how much hotter than our own was the weather of this Golden Age. I cannot account for it. It may be that the sun was hotter, or the earth nearer the sun…The great triumph of Humanity I had dreamed of took a different shape in my mind. It had been no such triumph of moral education and general co-operation as I had imagined. Instead, I saw a real aristocracy, armed with a perfected science and working to a logical conclusion the industrial system of to-day. Its triumph had not been simply a triumph over Nature, but a triumph over Nature and the fellow-man.”
–The Time Machine (1895) H.G. Wells

NOT FAR hence, fans of dystopian literary visions of a future earth may no longer require the greats of science fiction to illuminate our minds with vivid vistas of a ravaged and desolate planet. Nor require the services of a time machine. Reading the latest scientific reports on climate change, one could be forgiven for interpreting socialist author H.G. Wells’ 1895 vision of a far-future earth an all too possible and proximate outcome of the actions of humans today.

According to data from U.S. government agencies NASA and the National Oceanic and Atmospheric Administration (NOAA), 14 of the 15 years of the 21st century have been the hottest on record, with 2014 the hottest year of all. Commenting on the report, Gavin Schmidt, director of NASA’s Goddard Institute for Space Studies made the conclusions clear: “This is the latest in a series of warm years, in a series of warm decades…While the ranking of individual years can be affected by chaotic weather patterns, the long-term trends are attributable to drivers of climate change that right now are dominated by human emissions of greenhouse gases.”

Nevertheless, using poster-boards and an easel to demonstrate how systematically the self-declared, “World’s Greatest Deliberative Body” clings to outmoded AV technology as tenaciously as it does to outdated arguments, in January, the U.S. Senate saw fit to debate, as well as vote against (twice), what scientists affirmed long ago: Humans are the force responsible for destabilizing earth’s climate, through the unrelenting combustion of fossil fuels for energy. …more