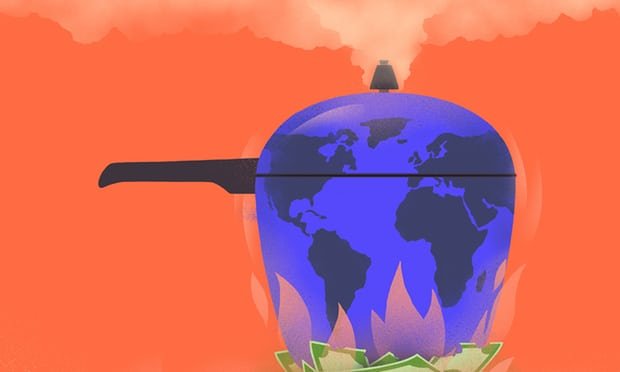 A lesson from Hurricane Irma: capitalism can’t save the planet – it can only destroy it

There was “a flaw” in the theory: this is the famous admission by Alan Greenspan, the former chair of the Federal Reserve, to a congressional inquiry into the 2008 financial crisis. His belief that the self-interest of the lending institutions would lead automatically to the correction of financial markets had proved wrong. Now, in the midst of the environmental crisis, we await a similar admission. We may be waiting some time.

For, as in Greenspan’s theory of the financial system, there cannot be a problem. The market is meant to be self-correcting: that’s what the theory says. As Milton Friedman, one of the architects of neoliberal ideology, put it: “Ecological values can find their natural space in the market, like any other consumer demand.” As long as environmental goods are correctly priced, neither planning nor regulation is required. Any attempt by governments or citizens to change the likely course of events is unwarranted and misguided.

The unregulated market is as powerless in the face of these forces as the people in Florida who resolved to fight Hurricane Irma by shooting it. It is the wrong tool, the wrong approach, the wrong system.

There are two inherent problems with the pricing of the living world and its destruction. The first is that it depends on attaching a financial value to items – such as human life, species and ecosystems – that cannot be redeemed for money. The second is that it seeks to quantify events and processes that cannot be reliably predicted.

Environmental collapse does not progress by neat increments. You can estimate the money you might make from building an airport: this is likely to be linear and fairly predictable. But you cannot reasonably estimate the environmental cost the airport might incur. Climate breakdown will behave like a tectonic plate in an earthquake zone: periods of comparative stasis followed by sudden jolts. Any attempt to compare economic benefit with economic cost in such cases is an exercise in false precision.

Even to discuss such flaws is a kind of blasphemy, because the theory allows no role for political thought or for action. The system is supposed to operate not through deliberate human agency, but through the automatic writing of the invisible hand. Our choice is confined to deciding which goods and services to buy.

But even this is illusory. A system that depends on growth can survive only if we progressively lose our ability to make reasoned decisions. After our needs, then strong desires, then faint desires have been met, we must keep buying goods and services we neither need nor want, induced by marketing to abandon our discriminating faculties, and to succumb instead to impulse.