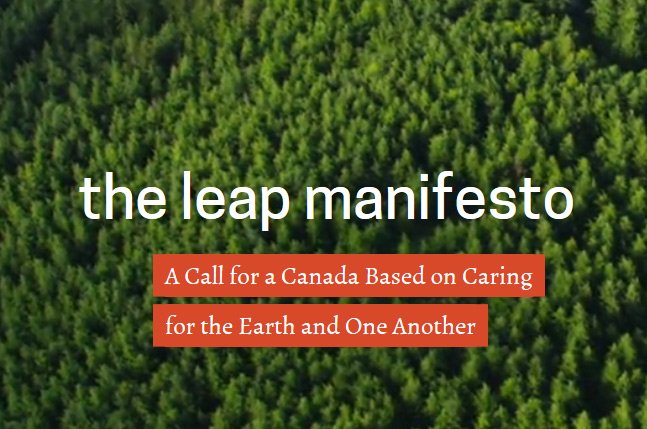 We start from the premise that Canada is facing the deepest crisis in recent memory.

The Truth and Reconciliation Commission has acknowledged shocking details about the violence of Canada’s near past. Deepening poverty and inequality are a scar on the country’s present. And Canada’s record on climate change is a crime against humanity’s future.

These facts are all the more jarring because they depart so dramatically from our stated values: respect for Indigenous rights, internationalism, human rights, diversity, and environmental stewardship.

Canada is not this place today— but it could be.

We could live in a country powered entirely by truly just renewable energy, woven together by accessible public transit, in which the jobs and opportunities of this transition are designed to systematically eliminate racial and gender inequality. Caring for one another and caring for the planet could be the economy’s fastest growing sectors. Many more people could have higher wage jobs with fewer work hours, leaving us ample time to enjoy our loved ones and flourish in our communities.

We know that the time for this great transition is short. Climate scientists have told us that this is the decade to take decisive action to prevent catastrophic global warming. That means small steps will no longer get us where we need to go.

This leap must begin by respecting the inherent rights and title of the original caretakers of this land. Indigenous communities have been at the forefront of protecting rivers, coasts, forests and lands from out-of-control industrial activity. We can bolster this role, and reset our relationship, by fully implementing the United Nations Declaration on the Rights of Indigenous Peoples.

“Small steps will no longer get us to where we need to go. So we need to leap”. Moved by the treaties that form the legal basis of this country and bind us to share the land “for as long as the sun shines, the grass grows and the rivers flow,” we want energy sources that will last for time immemorial and never run out or poison the land. Technological breakthroughs have brought this dream within reach. The latest research shows it is feasible for Canada to get 100% of its electricity from renewable resources within two decades[1]; by 2050 we could have a 100% clean economy[2].

We demand that this shift begin now.

There is no longer an excuse for building new infrastructure projects that lock us into increased extraction decades into the future. The new iron law of energy development must be: if you wouldn’t want it in your backyard, then it doesn’t belong in anyone’s backyard. That applies equally to oil and gas pipelines; fracking in New Brunswick, Quebec and British Columbia; increased tanker traffic off our coasts; and to Canadian-owned mining projects the world over.

The time for energy democracy has come: we believe not just in changes to our energy sources, but that wherever possible communities should collectively control these new energy systems.

As an alternative to the profit-gouging of private companies and the remote bureaucracy of some centralized state ones, we can create innovative ownership structures: democratically run, paying living wages and keeping much-needed revenue in communities. And Indigenous Peoples should be first to receive public support for their own clean energy projects. So should communities currently dealing with heavy health impacts of polluting industrial activity.

Power generated this way will not merely light our homes but redistribute wealth, deepen our democracy, strengthen our economy and start to heal the wounds that date back to this country’s founding.

A leap to a non-polluting economy creates countless openings for similar multiple “wins.” We want a universal program to build energy efficient homes, and retrofit existing housing, ensuring that the lowest income communities and neighbourhoods will benefit first and receive job training and opportunities that reduce poverty over the long term. We want training and other resources for workers in carbon-intensive jobs, ensuring they are fully able to take part in the clean energy economy. This transition should involve the democratic participation of workers themselves. High-speed rail powered by just renewables and affordable public transit can unite every community in this country – in place of more cars, pipelines and exploding trains that endanger and divide us.

And since we know this leap is beginning late, we need to invest in our decaying public infrastructure so that it can withstand increasingly frequent extreme weather events.

Moving to a far more localized and ecologically-based agricultural system would reduce reliance on fossil fuels, capture carbon in the soil, and absorb sudden shocks in the global supply – as well as produce healthier and more affordable food for everyone.

We call for an end to all trade deals that interfere with our attempts to rebuild local economies, regulate corporations and stop damaging extractive projects. Rebalancing the scales of justice, we should ensure immigration status and full protection for all workers. Recognizing Canada’s contributions to military conflicts and climate change — primary drivers of the global refugee crisis — we must welcome refugees and migrants seeking safety and a better life.

Shifting to an economy in balance with the earth’s limits also means expanding the sectors of our economy that are already low carbon: caregiving, teaching, social work, the arts and public-interest media. Following on Quebec’s lead, a national childcare program is long past due. All this work, much of it performed by women, is the glue that builds humane, resilient communities – and we will need our communities to be as strong as possible in the face of the rocky future we have already locked in.

Since so much of the labour of caretaking – whether of people or the planet – is currently unpaid, we call for a vigorous debate about the introduction of a universal basic annual income. Pioneered in Manitoba in the 1970’s, this sturdy safety net could help ensure that no one is forced to take work that threatens their children’s tomorrow, just to feed those children today.

We declare that “austerity” – which has systematically attacked low-carbon sectors like education and healthcare, while starving public transit and forcing reckless energy privatizations – is a fossilized form of thinking that has become a threat to life on earth.

How we can pay for all of this? Read “We Can Afford The Leap” by Bruce Campbell, Seth Klein, and Marc Lee

The money we need to pay for this great transformation is available — we just need the right policies to release it. Like an end to fossil fuel subsidies. Financial transaction taxes. Increased resource royalties. Higher income taxes on corporations and wealthy people. A progressive carbon tax. Cuts to military spending. All of these are based on a simple “polluter pays” principle and hold enormous promise.

One thing is clear: public scarcity in times of unprecedented private wealth is a manufactured crisis, designed to extinguish our dreams before they have a chance to be born.

Those dreams go well beyond this document. “We call on all those seeking political office to seize this opportunity and embrace the urgent need for transformation”. We call for town hall meetings across the country where residents can gather to democratically define what a genuine leap to the next economy means in their communities.

Inevitably, this bottom-up revival will lead to a renewal of democracy at every level of government, working swiftly towards a system in which every vote counts and corporate money is removed from political campaigns.

This is a great deal to take on all at once, but such are the times in which we live.

The drop in oil prices has temporarily relieved the pressure to dig up fossil fuels as rapidly as high-risk technologies will allow. This pause in frenetic expansion should not be viewed as a crisis, but as a gift.

It has given us a rare moment to look at what we have become – and decide to change.

And so we call on all those seeking political office to seize this opportunity and embrace the urgent need for transformation. This is our sacred duty to those this country harmed in the past, to those suffering needlessly in the present, and to all who have a right to a bright and safe future.

Now is the time for boldness.

now is the time to leap.