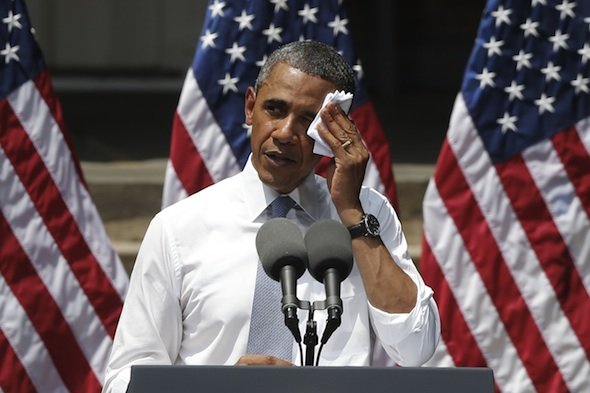 The climate change march in New York on Sept. 21, expected to draw as many as 200,000 people, is one of the last gasps of conventional liberalism’s response to the climate crisis. It will take place two days before the actual gathering of world leaders in New York called by U.N. Secretary-General Ban Ki-moon to discuss the November 2015 U.N. Climate Conference in Paris. The marchers will dutifully follow the route laid down by the New York City police. They will leave Columbus Circle, on West 59th Street and Eighth Avenue, at 11:30 a.m. on a Sunday and conclude on 11th Avenue between West 34th and 38th streets. No one will reach the United Nations, which is located on the other side of Manhattan, on the East River beyond First Avenue—at least legally. There will be no speeches. There is no list of demands. It will be a climate-themed street fair.

The march, because its demands are amorphous, can be joined by anyone. This is intentional. But as activist Anne Petermann has pointed out, this also means some of the groups backing the march are little more than corporate fronts. The Climate Group, for example, which endorses the march, includes among its members and sponsors BP, China Mobile, Dow Chemical Co., Duke Energy, HSBC, Goldman Sachs, JPMorgan Chase and Greenstone. The Environmental Defense Fund, which says it “work[s] with companies rather than against them” and which is calling on its members to join the march, has funding from the oil and gas industry and supports fracking as a form of alternative energy. These faux environmental organizations are designed to neutralize resistance. And their presence exposes the march’s failure to adopt a meaningful agenda or pose a genuine threat to power.

Our only hope comes from radical groups descending on New York to carry out direct action, including Global Climate Convergence and Popular Resistance. March if you want. But it should be the warm-up. The real fight will come once people disperse on 11th Avenue.

“The march is symbolic,” said Kevin Zeese of Popular Resistance when I reached him by phone, “but we are past the time of symbolism. What we need is direct action against the United Nations during the meeting. This should include blockades and disruption of the meeting itself. We need to highlight the fact that the United Nations has sold out to corporate interests. At U.N. meetings on climate change you see corporate logos on display. During the last meeting on climate change in Poland, the U.N. held a simultaneous conference to promote coal as a clean energy source. These U.N. meetings have become corporate trade shows where discussions on climate are hijacked to promote corporate interests. Barack Obama has announced he will continue the U.S. stance of only calling for voluntary climate goals in advance of the upcoming climate summit in Paris next year.”

The fossil fuel industry and corporations, from ExxonMobil to Koch Industries, underwrite political campaigns and author our legislation. They have stacked the courts with their judges and the airwaves with their apologists. They fund our scientific research and have effectively silenced dissidents. This corporate reach extends to the United Nations. Companies set up exhibition halls at U.N. climate summits promoting various corporate schemes to profit from the climate crisis, from “clean” coal and biofuel to nuclear power and carbon trading. Those who attempt to offer a counter narrative, especially after the disruptions at the climate summit in Copenhagen in 2009, are swiftly silenced by U.N. security. Fences and security barriers now ring heavily guarded U.N. climate conferences. Protesters are herded into police-controlled “free speech” zones outside—like the march in New York—and ruthlessly dealt with if they deviate from the approved routes or make their voices heard among the delegates. The U.N. security at climate summits, which includes physically removing journalists so they cannot photograph or document protests that are shut down by force, is so absolute that the U.N. demands preapproved wording for T-shirts worn at its gatherings. The elites, whether in Congress or attending U.N. summits, have no intention of cutting off their access to wealth, power and privilege. They know where the money is. They know what they have to do to get it. And we are not part of the equation.

Our democracy is an elaborate public relations charade. And the longer we accept this charade the longer we will be irrelevant. Only when we understand power can we fight it. This fight must be waged on two fronts. We must disrupt the machinery of corporate capitalism and at the same time build parallel, autonomous structures for self-governance that address basic needs such as food and green energy. Capitalism, as Karl Marx pointed out, is not merely a system of economic exploitation. It justifies itself by hijacking the ruling political and economic ideologies—ideologies that buttress capitalism’s ceaseless expansion and commodification of the natural world and human beings. “The ruling ideas are nothing more than the ideal expression of the dominant material relationships,” Marx wrote, “the dominant material relationships grasped as ideas.” And this makes our struggle a battle for ideas as well as a battle for power.

This is not a battle I would have picked. I prefer incremental and piecemeal reform. I prefer a system in which we can elect politicians to represent the governed and thwart corporate abuse. I prefer a United Nations that serves the interests of people around the globe rather than corporate profit. I prefer a vigorous and free debate in the public arena. I prefer a judiciary that is not a wholly owned subsidiary of the corporate state. I prefer the freedom to express dissent without government monitoring of my communications and control of my movements. I prefer to have my basic civil liberties protected. But we do not live in such a system.

The corporate state’s response to climate change has been to pass a series of draconian laws and set up a vast security and surveillance apparatus that obliterates our privacy, allows us to be snatched off the streets by the military and held without due process in indefinite detention, and criminalizes dissent. The corporate state holds in its hands the legal and physical tools to shut us down. Its response to climate change is not to alter course, but to silence any who resist.

Joe Sacco and I spent two years writing “Days of Destruction, Days of Revolt.” We wrote the book out of the nation’s most impoverished sacrifice zones, places such as Indian reservations, abandoned manufacturing centers, the coalfields of southern West Virginia and the nation’s produce fields. Corporate capitalism holds total, unchallenged power in these sacrifice zones. The politicians, the judges, the press, even the boards of education bow before the dictates of corporate power. And in these sacrifice zones activists have learned something many Americans have yet to understand—corporations are willing to poison Earth and all of its inhabitants for profit. There are no limits.

The collapse of the ecosystem in sacrifice zones brings with it despair, joblessness, high cancer rates, the loss of hope and increased state repression. Those trapped in these sacrifice zones often retreat into drugs and alcohol, the only way for many to blunt the pain. They believe they have no agency. And this misery and despair serve the ends of corporate power. As the environment devolves, the planet becomes one vast sacrifice zone. Joe and I wrote the book as a warning.

The New York Times published a story last week based on a draft of a new report from the U.N. ’s Intergovernmental Panel on Climate Change that speaks of climate change with uncharacteristic bluntness and alarm. The article reads in part:

Runaway growth on the emission of greenhouse gases is swamping all political efforts to deal with the problem, raising the risk of “severe, pervasive and irreversible impacts” over the coming decades, according to a draft of a major new United Nations report.

Global warming is already cutting grain production by several percentage points, the report found, and that could grow much worse if emissions continue unchecked. Higher seas, devastating heat waves, torrential rain and other climate extremes are also being felt around the world as a result of human emissions, the draft report said, and those problems are likely to intensify unless the gases are brought under control.

The world may already be nearing a temperature at which the loss of the vast ice sheet covering Greenland would become inevitable, the report said. The actual melting would then take centuries, but it would be unstoppable and could result in a sea level rise of 23 feet, with additional increases from other sources like melting Antarctic ice, potentially flooding the world’s major cities.

We have known about the deleterious effects of carbon emissions for decades. The first IPCC report was published in 1990. Yet since the beginning of the Kyoto Protocol Era in the late 1980s, we have emitted as much carbon dioxide as was emitted in the prior 236 years. The rising carbon emissions and the extraction of tar sands—and since the industry has figured out how to transport tar sands without building the northern leg of the Keystone XL pipeline, this delivery seems assured—will continue no matter how many police-approved marches are held. Play by the rules and we lose.