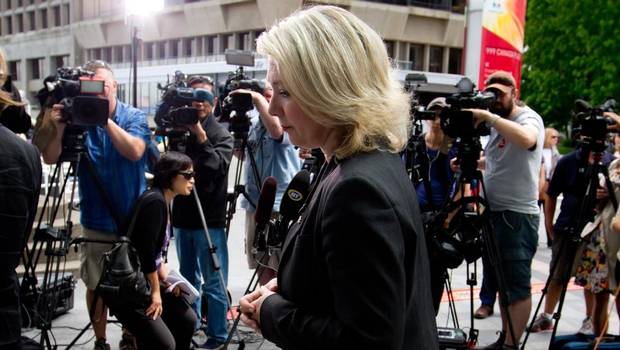 The B.C. government will not exert its authority over the Kinder Morgan Inc. oil-pipeline proposal, despite a protracted battle with the energy company during the National Energy Board process.

After a respected intervenor quit the hearing in frustration, Environment Minister Mary Polak offered only tepid support for the federal review. “When it comes to public confidence, that’s over to the NEB. We’ve certainly had our own issues with the process,” Ms. Polak said Monday in an interview.

The province complained to the NEB in July that Kinder Morgan had not responded to many of its questions.

“That makes it difficult for the Province to evaluate whether the Trans Mountain Expansion project will include world-leading marine and land oil spill systems,” the province stated in an official complaint to the NEB.

Marc Eliesen, a former chief executive officer of BC Hydro, said Monday he quit the hearing process for the same reason – the board has allowed Kinder Morgan to elude cross-examination and to refuse to answer questions. About 50 intervenors, including the province, challenged Kinder Morgan’s responses to questions in roughly 2,000 instances. In a ruling in October, the NEB ordered the company to come up with more thorough answers in about 5 per cent of those cases.

“To me this is a farce: There is no way you can test the evidence if they won’t answer the basic questions,” Mr. Eliesen said in an interview. “Unfortunately, this board is not objective. This board is biased.”

Mr. Eliesen called on the B.C. government to conduct a provincial environmental review independent of the federal process.