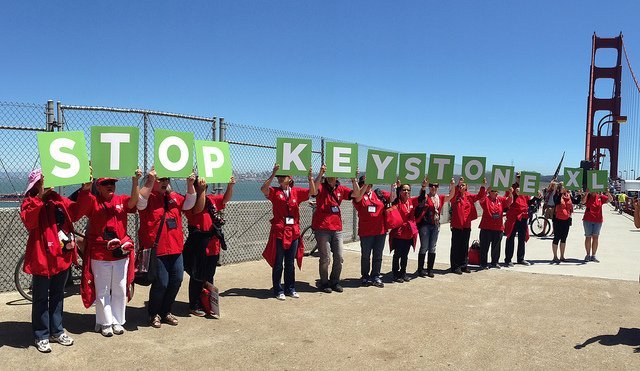 A new study from the journal Nature Climate Change challenges the official narrative surrounding the proposed Keystone XL put forward by the State Department and lauded by the oil industry — mainly that the impact the pipeline will have on our Earth’s atmosphere will be insignificant. The report’s authors,Peter Erickson and Michael Lazarus of the Stockholm Environment Institute, found that net annual impact of the XL could be as high has 110 million tons of CO2 equivalent per year, four times the State Department’s projection:

Climate policy and analysis often focus on energy production and consumption, but seldom consider how energy transportation infrastructure shapes energy systems. US President Obama has recently brought these issues to the fore, stating that he would only approve the Keystone XL pipeline, connecting Canadian oil sands with US refineries and ports, if it ‘does not significantly exacerbate the problem of carbon pollution’. Here, we apply a simple model to understand the implications of the pipeline for greenhouse gas emissions as a function of any resulting increase in oil sands production. We find that for every barrel of increased production, global oil consumption would increase 0.6 barrels owing to the incremental decrease in global oil prices. As a result, and depending on the extent to which the pipeline leads to greater oil sands production, the net annual impact of Keystone XL could range from virtually none to 110 million tons CO2 equivalent annually. This spread is four times wider than found by the US State Department (1–27 million tons CO2e), who did not account for global oil market effects. The approach used here, common in lifecycle analysis, could also be applied to other pending fossil fuel extraction and supply infrastructure.

Salon reports on the study’s reception:

Reactions have varied to the findings, the Associated Press reports. The State Department has yet to respond, while American Petroleum Institute dismissed them entirely, arguing, as it has in the past, that the Alberta’s tar sands oil is going to find a way out of the ground one way or another. Outside experts emphasized that the extra greenhouse gas emissions still aren’t particularly significant, compared to the 36 billion tons of CO2 emitted worldwide in 2013. Still, they argued, it ups the symbolic stakes: How can a government that claims to be committed to cutting carbon pollution turn around and allow something that will do precisely the opposite?