Clocking in at 410.7 parts per million at the Mauna Loa Observatory, this key heat trapping gas hit a range not seen on Earth for many millions of years. 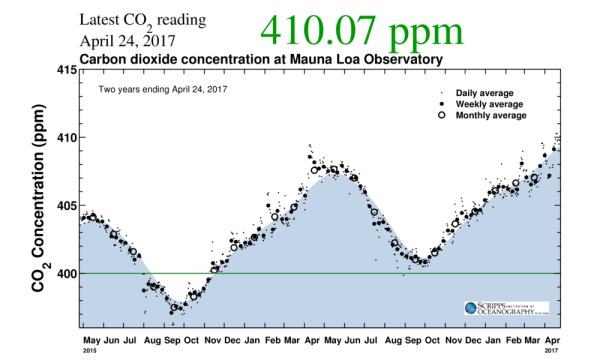 (The world crossed the 410 part per million milestone in the daily measure this week. Image source: The Keeling Curve.)

These levels now correspond with the Miocene Climate Epoch when seas were 120 to 190 feet higher than today and when global temperatures ranged from 3 to 5 degrees Celsius hotter than preindustrial averages.

These new records come following two years of record rates of atmospheric CO2 accumulation. According to NOAA, carbon dioxide accumulated by 3.03 parts per million during 2015 and by 3.00 parts per million during 2016. These now represent the two fastest rates of carbon dioxide accumulation in the climate record to date. By comparison, the substantial warming at the end of the last ice age was accompanied by an approximate 0.01 part per million per year rate of CO2 increase averaged over 10,000 years.

2017 rates of atmospheric CO2 accumulation, according to NOAA, appear to have backed off somewhat in the first quarter. Comparative gains from Q1 2016 to Q1 2017 are about 2.8 parts per million. A weak La Nina in the Pacific during late 2016 probably helped ocean surfaces to cool and to draw down a bit more CO2. However, the rate of increase is still disturbingly rapid. A 2.8 ppm increase in 2017, should it emerge, would be the 4th highest annual rate of increase in the record and would be substantially above past decadal averages. Hopefully, this still-disturbingly-rapid rate of increase will continue to tail off a bit through the year. But it is increasingly clear that the time for urgent action to reduce carbon emissions and this very harmful related rate of accumulation is now upon us. 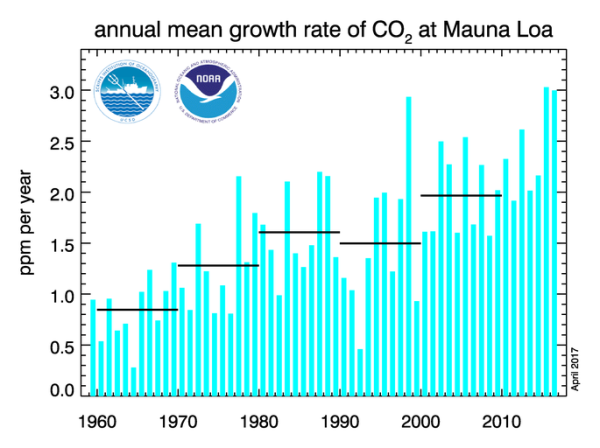 (The CO2 growth rate has recently been ramping higher due to record carbon emissions during the present decade. Rates of carbon emission will need to fall away from record high rates in order to tamp down the presently high rate of accumulation which will tend to trend higher even if such emissions remain at plateau due to various faltering carbon sinks and leaking natural carbon stores. Image source: NOAA.)

The total CO2 increase since major fossil fuel burning began in the 19th Century is now in the range of 130 parts per million from 280 (ppm) to today’s high of 410 (ppm). By comparison, during the end of the last ice age, levels of this heat trapping gas jumped by about 100 (ppm) from around 180 (ppm) to 280 (ppm). Atmospheric averages for 2017 should range about 3-4 ppm lower than the April-May high mark (which might still hit daily highs of 411 ppm or more). But at present rates of increase, we’ll be leaving the 410 ppm threshold level in even the lower average months behind in just a handful of years.

Depending on How You Look at it, We’re 5 to 30 Million Years Out of the Holocene Context

The primary driver of the present extreme rate of CO2 increase is global carbon emissions (primarily from fossil fuel burning) in a record range near 11 billion tons per year (or nearly 50 billion tons of CO2 equivalent gas each year). Though 2014 through 2016 saw a plateau in the rate of global carbon emission, the decadal average accumulation of this emission is still at record highs. Meanwhile, it appears that warming oceans, lands more susceptible to deluges and wildfires, increasingly deforested regions like the Amazon, and thawing Arctic permafrost are less able to take in this record excess. As a result of these factors, human fossil fuel emissions will need to fall for a number of years before we are likely to see an impact on the average annual rate of atmospheric accumulation of this potent heat-trapping gas.

(Past paleoclimate proxy records show that we are millions of years out of the Holocene context when it comes to present levels of atmospheric CO2 accumulation. Image source: Skeptical Science.)

Paleoclimate studies of past epochs are unable to provide 100 percent accuracy for past atmospheric CO2 levels. However, proxy data provides a good range of estimates. Based on these measures, it appears that the most recent likely time when atmospheric CO2 levels were comparable to those we now see today occurred around 5 million years ago. Meanwhile, it appears possible that the last time CO2 levels were so high extended as far back as 20 to 25 million years ago.

Unfortunately, carbon dioxide is not the only heat trapping gas humans have emitted into the atmosphere. Add in methane and other greenhouse gasses and you end up with a heat forcing roughly equivalent to 493 parts per million of CO2 (CO2e) during 2017 at present rates of increase. This level is very close to the maximum Miocene boundary level of 500 parts per million — a total amount of heat forcing that likely hasn’t been seen in 20-30 million years.

The only safe and reliable way to halt the rapid rise of heat trapping gasses and concurrent warming is to cease emitting carbon to the atmosphere. Such an undertaking would primarily involve a major shift away from fossil fuel burning machines and infrastructure. Present low-cost renewable energy provides a powerful option for just such a transition. In addition, various forms of atmospheric carbon capture from changes to land use, to biofuel-based carbon capture, to materials-based carbon capture will be necessary to draw down the extraordinarily high level of carbon overburden that has already been emitted. Failing such an undertaking, however ambitious, would consign the world to increasingly harmful temperature increases and related damaging geophysical changes for the foreseeable future.