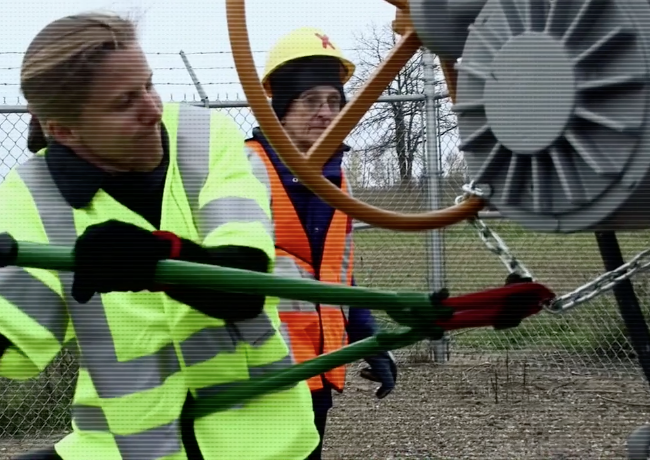 A judge in Minnesota has cleared the way for an unusual and potentially groundbreaking defense, allowing climate activists to use the “necessity” of confronting the climate crisis as justification for temporarily shutting down two crude oil pipelines last year.

Robert Tiffany, a district court judge in Clearwater County, Minnesota, ruled on Oct. 11 that three activists who were arrested and charged with felonies last year can argue that they violated the law in order to protect citizens from the impacts of global warming and that they had no legal alternative.

“It is extremely unusual for a court to allow presentation of the necessity defense by environmental protesters,” said Michael Gerrard, director of the Sabin Center for Climate Change Law at Columbia University. “It will be fascinating to see how this trial goes and how much evidence the court allows.”

The ruling is only the third time a judge in the United States has allowed for such a defense in a climate case. The first case, in Massachusetts in 2014, did not go to trial after the prosecutor dropped the charges. A judge allowed the necessity defense in a Washington State case in 2016 but then instructed jurors they could not acquit on necessity. “Only a few courts have allowed presentation of the climate necessity defense, and until Friday, no judge in a jury trial in the United States had recognized the defense in writing,” the Climate Defense Project, a legal nonprofit that provided pre-trial briefing and is part of the defendants’ legal team, said in a statement.

In the Minnesota case, Emily Johnston, Annette Klapstein and Benjamin Joldersma are charged with felonies over the shutdown of two pipelines there on Oct. 11, 2016. A fourth defendant, Steven Liptay, who filmed the pipeline shutdowns, is charged with two gross misdemeanors.

Enbridge Inc., the Canadian company that owns and operates the two pipelines, said at the time of the shutdowns that the actions were “reckless and dangerous” and that the company would “support the prosecution of all those involved,” according to news reports.

An Unusual Legal Tactic for Protesters

Use of a necessity defense is typically used not for protests but for more clear cut cases of individuals intentionally committing a crime to prevent imminent danger, such as breaking into a house where someone is being held hostage, Gerrard said.

Political activists have, however, used the necessity defense in the past in opposition to issues including the Vietnam War, nuclear weapons and abortion.

The defense tactic is widely seen as an attempt to focus attention on controversial government policies by forcing jurors to pass judgment on the morality of such policies and of individuals’ resistance to them.

The pipeline shutdowns in Minnesota were part of a multi-state protest by the group Climate Direct Action to protest the flow of tar sands crude into the U.S., and to show solidarity with the Dakota Access pipeline protests in North Dakota.

A Greater Risk than Climate Change?

“I think it’s a sensible ruling that will allow the jurors to take into consideration all of the information that they really need to rule on this case properly,” Marla Marcum, director of the Climate Disobedience Center, said.

Marcum’s group is collaborating with the defendants in the Minnesota case and other “valve turner” cases on trial strategy.

The case in Minnesota may center around whether the actions taken by the protestors—shutting down valves on an active pipeline—presented an equal or greater risk than that posed by climate change.

“You are getting close to threats to public health, welfare, safety, when you start actually damaging the infrastructure itself,” Patrick Parenteau, an environmental law professor at Vermont Law School said.

“The equation here is, did the defendants take action appropriate to draw attention to the problem, or does the balance tip against them and in favor of protecting public health and safety. The prosecutor will probably put people on the stand who will say, this is dangerous,” Parenteau said.

Soon after the pipeline shutdowns last fall, Carl Weimer of the Pipeline Safety Trust, an industry watchdog, characterized the activity as a “dangerous stunt” according to news reports. Marcum said that in each case, pipeline operators were notified of the valve closures several minutes before they occurred so the companies could shut down the compressors that pump the oil through the pipes to safely shut the pipelines down.

Gerrard said the decision to allow a necessity defense may be part of a growing awareness in the courts of the risks of climate change, including recent rulings on coal leases and natural gas pipelines, that went in favor of closer scrutiny of environmental considerations.

“What we are seeing in some courts is there is such frustration at the failure of the executive and legislative branches to act on climate change that some courts are becoming willing to step in,” he said.