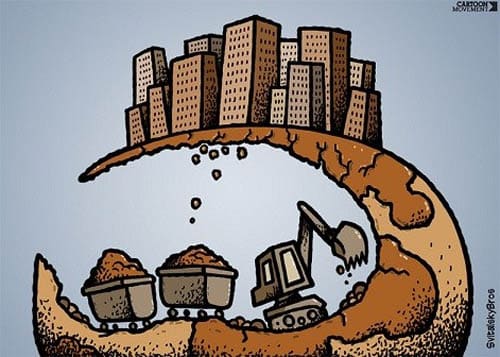 Can Marxism strengthen our understanding of ecological crises? The author of Marx’s Ecology replies to a critic on metabolic rift, sustainable human development,  degrowth, population growth, and industrialism.

Prof. Bellamy Foster is a renowned scholar. If his scholarship is also meant to serve the cause he espouses, he may be requested to please reply to the following questions/comments of a reader of this article:

Of what use is it to replace the commonly used and well understood term “great ecological crisis” through the hardly known and not well understood long Marxian term “metabolic rift in the human relation to the earth?”

There are some more statements/phrases in the article that throw up critical comments: e.g.”Creating a world of sustainable human development …” This caused me to raise my eyebrows. “Sustainable development” has since the 1980s been the buzzword of capitalist development economics. But the term meant nothing new. It was like dehydrated pure drinking water. Of course, Bellamy Foster is using the additional attribute “human”. But “human development” has also been around for long. Doesn’t it mean in plain English sustainable economic growth?

A straightforward question: Doesn’t Bellamy Foster think that Eco-Socialism’s immediate goal should be to initiate a policy of de-growth, a contracting economy, and a contracting population? And the long-term goal a socialist steady-state economy at a low level?

We know how much ecological havoc the socialist Soviet Union and other “socialist” countries of Eastern Europe wreaked. It is therefore not right to say, I think, “It is capitalism … that constitutes our “burning house.” Isn’t it better, because truer, that it is industrialism that constitutes for the last two hundred years our burning house, capitalism and “socialism” being merely two political variants of the same industrial way of living?

AGAINST THE EXPROPRIATION OF THE EARTH:
A RESPONSE TO SARAL SARKAR

I appreciate Saral Sarkar’s questions regarding my Foreword to Ian Angus’s Facing the Anthropocene. I will attempt to answer his queries as briefly as I can and in the order in which they were asked. I have numbered my responses for the convenience of the reader.

(1) There is no sense in which Marx’s concept of an “irreparable rift in the interdependent process of social metabolism” (or metabolic rift), as this concept is employed by ecosocialists today, can be seen as a substitute for the notion of global ecological crisis. Marx’s development of a socioecological systems approach (rooted in the notion of metabolism) grew out of the natural-scientific discussions of his time and prefigured the rise of the ecosystem concept and later Earth System analysis. It is closely connected to our current scientific understanding.

Thus, an article in Scientific Reports in March 2017 refers to the “metabolic rift,” citing Marx’s Capital, in an attempt to address some of our contemporary human-ecological problems. Similarly, scientists in the Anthropocene Working Group define the Anthropocene as an “anthropogenic rift” in the Earth System (or Earth metabolism). Indeed, rather than displacing the notion of global ecological crisis, Marx’s metabolic rift can be seen as adding clarity to our understanding of that very real crisis, and particularly the dialectical interconnections between its social and ecological aspects.

(2) The concept of “sustainable human development” was highlighted in Paul Burkett’s now classic essay, “Marx’s Vision of Sustainable Human Development,” published in the October 2005 issue of Monthly Review. Marx in volume 3 of Capital presented what is undoubtedly the most radical conception of sustainability ever introduced, arguing that individuals don’t own the earth; that even all the people in all the countries of the world don’t own the earth, but that they simply hold it in trust for future generations and must maintain it and even improve it as good heads of the household. He defined socialism as a social formation in which the associated producers rationally regulate their metabolism with the earth in such a way as to promote genuine human needs, while at the same time economizing on the expenditure of energy.

Surely it would be a fatal error for the left to disarm itself intellectually by abandoning contested concepts like sustainability and ecology—or, for that matter, equality, democracy, and freedom—simply because they have been appropriated and distorted in various ways by the dominant ideology. We need to fight for our own perspectives.

(3) Degrowth, in the form in which it is usually presented today, cannot be the principal organizing objective of the ecosocialist movement, since it neither addresses the immediate ecological threat nor engages with the need for structural change in the capital system. Given the planetary emergency, the ecological movement’s primary goal at present has to be one of mitigating climate change, which however cannot be separated from a host of other social and ecological problems.

In the Anthropocene, we are faced with the eventual prospect, if society continues to follow the path of business as usual, of the end of civilization (in the sense of organized human society) and even potentially of the human species itself. But well before that hundreds of millions of people will be affected by increasing droughts, rising sea levels, and extreme weather events of all kinds.

This requires a radical change in the “political and economic hegemony,” as Kevin Anderson of the Tyndall Centre for Climate Change Research puts it. Anderson also insists on an immediate moratorium on economic growth and on all attempts to spur growth at the expense of the environment. Conservation is needed as well as shifts in resource use, technology, and use values. Fossil fuels have to be kept in the ground.

All of this is in line with what is argued by degrowth theorists. But the whole concept of degrowth has been distorted by the fact that it is generally used to put the dominant concept of economic growth on its head, arguing simply for downsizing the system, or putting it in reverse, without engaging in a full critique of capitalism or the promotion of the revolutionary structural changes that would be needed in confronting the capital system. There is certainly no question that we need to move toward a steady-state economy in Herman Daly’s sense of no net capital formation. The weight of the economy in the rich countries of the advanced capitalist world needs to be reduced.

But we should not make the error of seeing this as just an issue of scale as degrowth theorists commonly do. The entire structure of the capital system itself needs to be overcome and replaced by a society of substantive equality and ecological sustainability. Failure to address revolutionary structural change is the main weakness of the degrowth perspective, which has not yet escaped the ideology of capital. Thus, leading degrowth thinkers like Serge Latouche insist that degrowth in their terms is somehow compatible with capitalism.

(4) It is true that all other things being equal increased population places more burdens on the carrying capacity of the earth. But crude Malthusian perspectives are not at all useful in addressing the ecological problem. It is capital accumulation, not population increase, that is the major factor in climate change. Although carbon emissions have to cease everywhere on earth within the next few decades—i.e., the world has to reach zero net emissions by 2050—the biggest reductions in emissions will necessarily have to occur in the rich countries, where per capita carbon emissions are highest.

Population growth in capitalism is a dependent variable. It is dependent on conditions of capitalism and imperialism in a given state or region, and on such factors as employment, health, education, women’s rights, etc. An excellent book on this topic is Ian Angus and Simon Butler, Too Many People?

(5) The question of whether it is industrialism rather than capitalism that is the source of our “burning house” is an odd one for someone with a connection to ecosocialism to ask. The argument that Sarkal presents here is that because the Soviet Union too did damage to its environment, and it was industrialized but non-capitalist, that we should therefore move away from analysis of historically specific social formations, like capitalism (or formerly “actually existing socialism”), and instead we should just attribute the whole problem to the more general, abstract notion of industrialization.

The same logic if carried farther would lead one to argue that, since pre-industrial societies also destroyed their environments, industrialization is not a sufficient explanation. We should therefore attribute the environmental problem to human society in general. And, then, since humans are social animals, society itself can be considered an insufficient explanation, so we should attribute the ecological problem to the very existence of human beings. Ergo there are simply too many people.

Such an approach is not very helpful in that it removes all the crucial historical elements of the problem, and also our ability to act in rational ways. What is beyond question is that capitalism is a system dedicated to capital accumulation above all. As Marx put it, the capitalist only knows “Go on, Go on” (Grow, Grow), i.e., M-C-M´… M-C-M´´… M-C-M´´´, ad infinitum. In its increasingly irrational attempts to expand, capital (the capitalist corporations) commodifies everything in existence, endangering humanity and the entire planet. In less than a generation under business as usual this process will take us over the climate cliff.

There is only one possible conclusion: System Change, Not Climate Change!