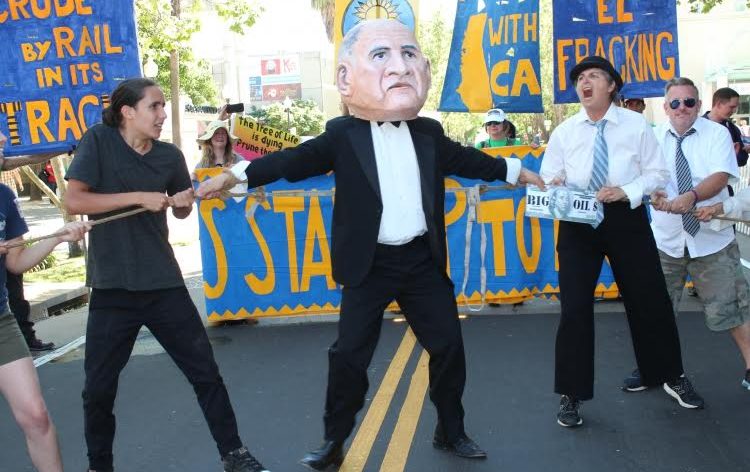 California Gov Jerry Brown is adamant that his newly unveiled package of legislation aimed at extending his state’s existing cap-and-trade program through 2030 is an essential step forward in the fight against climate change, but prominent green groups are characterizing the plan as yet another massive giveaway to large polluters.

“Governor Brown’s latest climate package perpetuates the myth that business as usual in the fossil fuel industry can go on with only a few small adjustments, and everything will be fine.”
—Stephen Kretzmann, Oil Change International

Masada Disenhouse, 350.org’s U.S. organizing coordinator, argued in a statement on Friday that “Big Oil’s fingerprints [are] all over” Brown’s plan, part of which has been endorsed by the California Chamber of Commerce, a business advocacy group.

“We need to extend California’s climate law, but we also need to protect the ability of local air districts to regulate pollution in their backyards—not give refineries and other fossil fuel infrastructure a free pass to pollute,” Disenhouse added, concluding that “legislators should come up with a stronger plan, while continuing to support bold legislation like SB 100 which would commit California to 100 percent clean energy by 2045.”

Since President Donald Trump decided to withdraw the United States from the Paris climate accord—a move that has been denounced as “stupid and reckless” by environmentalists—California, in partnership with several other states, has taken on a significant role in pushing back against the White House and moving forward with action to mitigate the effects of climate change.

Despite his recent depiction as a climate leader, however, Brown has long come under fire from environmental groups for his refusal to address significant issues like fracking, which 350.org founder Bill McKibben has called his “environmental blind spot.”

The broader issue with Brown’s approach, Oil Change International executive director Stephen Kretzmann argued on Thursday, is that he is “banking on a market-based industry-friendly solution” to “the greatest market failure ever.”

Instead of taking the path that is most amenable to business, Kretzmann said, Brown should be “listening to the voices of the many people in California who actually have to live with the fossil fuel industry in their backyard.”

“Governor Brown’s latest climate package perpetuates the myth that business as usual in the fossil fuel industry can go on with only a few small adjustments, and everything will be fine,” Kretzmann concluded. “That view may fly in the petrodollar soaked halls in Sacramento, but climate science and the health and wellbeing of communities living next to industry have a different perspective.”