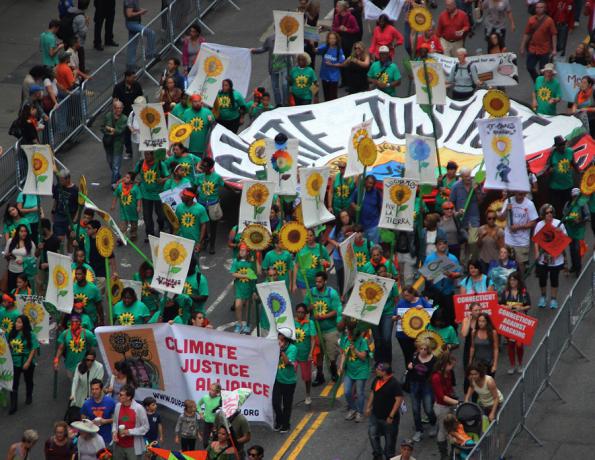 It takes roots to weather the storm: the road to Paris and beyond

As the effects of climate change continue to hit peak levels of catastrophe, global leaders have been promising a new climate agreement through the United Nations Framework Convention on Climate Change (UNFCCC) Conference of Parties (COP). From failing to sign the Kyoto Accord (1992), to undermining efforts for binding agreements at COP15 in Copenhagen (2009), the US has been playing a contradictory dual role of both moving forward a minimal level of climate action while assuring that the interests of transnational corporate polluters are protected. The insufficient pledges made by the US in Copenhagen in 2009, in addition to the pushing of false solutions such as carbon market, carbon trading and offset mechanisms, set a precedent that continues today. In December 2014, weeks before the COP20 convened in Lima, Peru the US and China announced a bilateral agreement that provides a weak foundation for a new UN climate agreement and sets the stage for a non-transparent and non-enforceable plan for cutting Greenhouse Gas (GHG) emissions. The China-US deal dashed whatever small hopes existed that the COP20 would deliver an outcome to slow the mounting crisis.

This year, the COP21 will take place in Paris, France from November 30-December 11, 2015. We are skeptical that a new agreement reached in Paris will be bold enough, enforceable, and at the scale and pace needed to avert global catastrophe. President Obama’s proposed Clean Power Plan (CPP) has been touted as a blueprint for honoring national commitments that may emerge in a Paris agreement. Yet the CPP has no clear commitment to emissions reduction, it allows too much flexibility for how states will implement the plan, and it requires no commitment to environmental justice principles or policies.

In order to achieve the policy shifts we need for the long-term, even the best inside strategies will not be strong enough if we are not organizing powerful, grassroots pressure on the outside as well. There is a promising, growing unity of social movements at the global scale led by the people most impacted by climate change, who are pressuring governments for more meaningful action, often while implementing their own real solutions on the ground and planning for how vulnerable communities can best survive severe impacts of climate change.

Copenhagen also sparked social movements, Indigenous Peoples’ movements and many Global South governments to declare “No deal is better than a catastrophic deal” and “We Need Systems Change, not Climate Change.” Leaders from frontline communities in the US who went to Copenhagen in 2009 on a delegation with organizations like Grassroots Global Justice Alliance (GGJ), Movement Generation and Indigenous Environmental Network (IEN) came home determined to build a stronger global social movement around climate change. They went on to form the Climate Justice Alliance (CJA) and in 2013 launched the Our Power Campaign: Communities United for a Just Transition. IEN, GGJ and CJA have been leading the participation of frontline communities in the climate movement within the US as well as internationally. Grassroots International (GRI) has been partnering with and accompanying social movements taking leadership for climate justice in the Global South, particularly movements of small-scale farmers (such as La Vía Campesina), Indigenous Peoples and Afro-descendent communities.

During the lead up to the People’s Climate March in September 2014, which mobilized an estimated 400,000 people in the largest climate march in history, GGJ, IEN, and other members of CJA were instrumental in ensuring that Indigenous and frontline communities led the march and commanded the world’s attention as the forefront voices of the climate justice movement. The planning for the People’s Climate March also forged new relationships between the grassroots organizing sector and more mainstream climate organizations, laying the groundwork for ongoing relationships and a broader united movement for climate justice. GGJ and GRI worked together closely to ensure meaningful participation of international social movements in both the march and the Peoples’ Climate Justice Summit, which was an important space for US-based and international climate justice movements to share analysis and strategies with one another.

It will be critical in 2015 to build up the momentum and escalate actions so that by the time we get to Paris, there is consistent pressure from a worldwide movement calling for serious action by governments, rejection of carbon market mechanisms such as REDD+ and other carbon offsets and radical emission cuts. But the battle will not end in Paris, and movements are already making long-term plans to keep up the momentum and share strategies through North-North, North-South, and South-South exchanges, national and international joint strategy sessions and collective action in the streets of Paris.

Grassroots Global Justice (GGJ) is providing leadership nationally and internationally by convening and aligning many key networks and coalitions in the global climate justice movement. Through years of increasingly close collaboration, these emerging networks and coalitions have been deepening the engagement of civil society actors around the world who are not represented in the UNFCCC process, and developing shared analysis and strategy. GGJ has been a key player in a movement of grassroots leaders around the globe that are uniting to strategize effective solutions to the climate crisis, and to develop plans for action post-Paris. People around the world feel a real urgency to develop systemic alternatives, and are at a point where they will not accept decisions by world leaders that fail to kick-start an immediate transition to get us out of this global crisis.

Some of these key formations include:
The Climate Space, which began as a venue at the World Social Forum 2013 in Tunisia to discuss the causes of and alternatives to climate change, has now developed into an ongoing global people’s climate process through a network of 30 international organizations like ATTAC France, ETC Group, Focus on the Global South, Global Forest Coalition, Grassroots Global Justice, Indigenous Environmental Network, La Vía Campesina, Polaris Institute, World March of Women, and others.
The Coalition Climat 21 (CC21), which was convened by French civil society associations, networks and social movements to support diverse, inclusive and collective work toward COP21 in Paris. CC21 is comprised of over 100 organizations in France with European and international participation.
The Mobilization Support Team of the People’s Climate Movement which consists of 350.org, ALIGN, Avaaz, Blue-Green Alliance, Climate Justice Alliance, GGJ, NYC Environmental Justice Alliance, Oil Change International, SEIU local 32BJ, Sierra Club, and Uprose.

Organizational Background
Grassroots Global Justice (GGJ) is an alliance of 58 US-based grassroots organizing (GRO) groups organizing to build an agenda for power for low-income people and communities of color. We weave and bridge together US-based GRO groups and global social movements working for climate justice, an end to war, and a Just Transition to a new economy that is better for people and the planet. GGJ was founded in 2005 as an alliance of organizations, with clear criteria that prioritize a diverse membership across race, gender, citizenship, class and sexuality, and comprised of people from frontline communities. GGJ was co-founder and co-anchor of Climate Justice Alliance, and now serves as co-chair. GGJ is also building the first-ever US chapter of the World March of Women, a global feminist movement.
Climate Justice Alliance (CJA) is a collaborative of 40 community organizations on the frontlines of the climate crisis, movement networks and support organizations. In 2013, CJA launched the Our Power Campaign (OPC): Communities United for a Just Transition, a national effort uniting communities fighting fossil fuels and other polluting industries around a common vision and strategy – to transition the economy in ways that reduce greenhouse gas emissions at the source, restore equity, and put decision-making in the hands of communities.
Indigenous Environmental Network (IEN) was formed in 1990 by grassroots Indigenous peoples and individuals primarily in North America to address environmental and economic justice. IEN’s activities include building the capacity of Indigenous communities and tribal governments to develop mechanisms to protect sacred sites, land, water, air, natural resources, health of both Native/Indigenous communities and all living things, and to build economically sustainable communities. IEN is on the coordinating committee of GGJ and the steering committee of CJA, and was a founding member of both alliances. IEN has been participating in the UN climate negotiations and mobilizing Indigenous communities, North and in the global South since 1998.
Institute for Policy Studies (IPS) is a community of public scholars and organizers linking peace, justice, and the environment in the U.S. and globally. Since 1963, IPS works with social movements to promote true democracy and challenge concentrated wealth, corporate influence, and military power, and is on the steering committee of CJA.
Grassroots International (GRI), founded in 1983, works in partnership with social movements around the globe to create a just and sustainable world by advancing the human rights to land, water, and food through global grantmaking, building solidarity across organizations and movements, and advocacy in the US. GRI is a member organization of both GGJ and CJA.