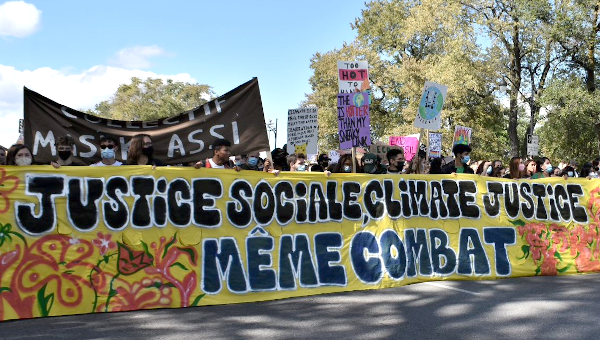 In the Wake of the Pandemic: The Rebirth of Climate Mobilizations

More than 110,000 students in Québec went on strike September 24, according to the Coalition étudiante pour un virage environnemental et social (CEVES – Student coalition for environmental and social transition), the Québec organizer of the demonstrations together with the Innu collective Mashk Assi, Solidarité sans frontières and Pour le futur Montréal. They marched in about a dozen cities, including Montréal, Québec, Sherbrooke, Gatineau (Ottawa), Alma, Rimouski, Granby, La Pocatière and Joliette – 10 to 15 thousand in Montréal, two to three thousand in Québec and hundreds elsewhere. As might be expected, some politicians attended, their presence and mollifying comments featured in the mass media. But a relatively large contingent from Québec solidaire contrasted with the minimal trade-union and popular presence, represented by only a few banners.

Priority in the messaging was given to signs (see my photo album) ranging from the predominant eco-anxiety (“Un futur, quel futur?”) to calls for action (“Planète qui crève. Élèves en grève” – Planet is dying, students are striking) and denunciations of the system (“Le climat change, pourquoi pas le système”), invoking a “climate revolution” in the form of some concrete and mobilizing demands: “Justin pipeline Trudeau, François ‘third link’ Legault,1 how dare you?” or “Leave it in the ground.” The general theme of the Montréal demonstration – “Justice sociale, Climate justice, même combat” on the huge banner opening the march – summed it up well.

Both the opening speeches and the end point of the Montréal march revealed the coalition’s judicious choices in terms of strategy and alliances. First to address the crowd, its banner preceding the general one for the demonstration, was the Innu collective Mashk Assi. The demonstration wound up in front the RCMP offices “as a sign of support to the protesters in Fairy Creek, in British Columbia, who are calling for a moratorium on the cutting down of old-growth forests. As of yesterday, 1,089 people have been arrested by the RCMP in Fairy Creek, making it the biggest movement of civil disobedience in Canada’s history” (La Presse).

Also speaking was a Montréal citizens’ association fighting the extension of the Port of Montréal in the L’Assomption wetland to speed the circulation of commodities through extended highways and construction of a truck-rail shipping complex. […] This was followed by a presentation of the movement Solidarité sans frontières, which calls for a massive opening of the borders to persons fleeing wars and poverty in the dependent countries, victims of imperialism and its local lackeys, their condition worsened by climate catastrophes and unbearably prolonged heat waves. In conclusion, the demonstration heard from a doctor representing the Quebec association of doctors for the environment and a health worker who eloquently demonstrated how the obvious consequences of the COVID-19 pandemic are a foretaste of what is coming from climate warming, and why our healthcare system is unprepared to cope with it.

Regrettably absent from the speakers’ tribune was the FRAPRU (Front d’action populaire en réaménagement urbaine – Urban redevelopment popular action front), one of the few popular organizations present at the demonstration with its banner, which calls for annual construction of 10,000 eco-energy social housing units, to help reduce GHGs and poverty while creating good jobs.

This demonstration was also preparatory for the Quebec component of the global mobilization planned to coincide with the COP-26 climate conference in early November. The COP-26 Coalition has chosen Friday, November 6 as the day of mass demonstration in Glasgow and elsewhere in the world.

Several hundred childcare workers in the Centres de petite enfance (CPE), affiliated to the CSN, demonstrated in the morning rain on September 24, while more than 10,000 of their co-workers struck for the day, protesting their abysmal wages. They are asking for parity with education workers, according to the president of the union in the Quebec City region.

We too often forget that these jobs are by definition ecological, for they require almost no mechanical, let alone fossil, energy, but a lot of human energy. Their purpose is to create rich social relations, the fabric of society, an antidote to the mass consumption materially based on alienated labour for profit, whether on the production line, under electronic surveillance, or isolated in front of one’s computer in a cubicle or at home. Their human labour with other humans is an integral part of the alternative society of care for people and the earth. The presence of this union at the climate mobilizations was needed to signify the advent of the trade-unions that can transform the climate-biodiversity movement into this realism that demands the impossible. •

Marc Bonhomme is a long-time socialist activist, economist and writer on the Quebec left. His writings can be found at marcbonhomme.com. Translation by Richard Fidler.