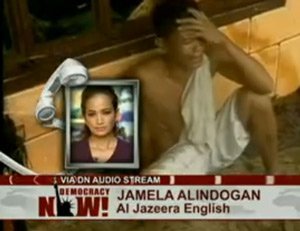 “If Not Now, Then When?”: As Climate Talks Open in Poland, Philippines Devastated by Another Storm

As the Philippines reels from one of the worst storms in history, the annual U.N. climate summit is opening today in Warsaw, Poland. Jeff Masters, director of meteorology at the Weather Underground, says rising sea levels caused by global warming increased the size of the storm’s surge, while the heating of the oceans threatens more extreme storms that could form into typhoons. We also air the emotional plea of Yeb Saño, a member of the Philippines Climate Change Commission, urging action on global warming at last year’s climate summit in Doha. Saño spoke just as Typhoon Bopha hit his country, killing hundreds and leaving 250,000 homeless. See video: http://www.democracynow.org/2013/11/11/if_not_now_then_when_as