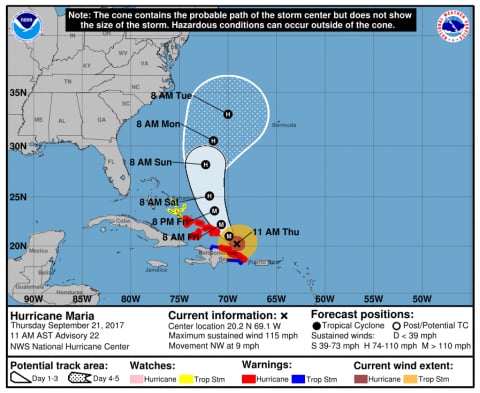 After leaving parts of Puerto Rico in ruins, Hurricane Maria was lashing the Dominican Republic on Thursday morning, whereas much as 20 inches of rain was in the forecast for high elevations. Maria will move into the Bahamas on Friday, but beyond the weekend the storm’s track becomes less certain.

Maria regained strength as it pulled away from Puerto Rico on Wednesday night. By Thursday morning, its rain bands and winds were lashing the Dominican Republic as the eye passed just 50 miles north of the Hispaniola coast.

At 8 a.m., Hurricane Maria had winds of 115 mph, which made the storm a Category 3. It’s expected to at least maintain that intensity — and possibly strengthen — in the coming days as it tracks northwest. Maria’s eye will move away from the Dominican Republic on Thursday as it slides toward the Turks and Caicos and the southeastern Bahamas into Friday morning.

Impacts in the Dominican Republic, Turks and Caicos and Southeast Bahamas include torrential rainfall — widespread totals of 8 to 16 inches with up to 20 inches in the high elevations. This could lead to deadly flash flooding and mudslides in the mountainous areas of Hispaniola.

The storm surge is forecast to reach 4 to 6 feet above normally dry land in the northeast Dominican Republic and up to a devastating 10 to 15 feet in the southeast Bahamas and Turks and Caicos, near and just north of where the center passes.

Hurricane warnings are in effect for the Dominican Republic from Cabo Engano to Puerto Plata, the Turks and Caicos, and the Southeast Bahamas.

The center of Hurricane Maria will reach the Turks and Caicos and Southeast Bahamas in the early morning hours Friday. By Saturday night, the storm will have cleared the islands on a path north.

Most forecast models suggest that the storm will turn away from the East Coast early next week. As the remnants of Hurricane Jose stall near New England, its counterclockwise winds will help push Maria to the east.

However, it’s still too soon to say Maria is not a threat to the East Coast. If Jose weakens very quickly, or if it doesn’t stall the way forecast models are suggesting, Hurricane Maria would have the opportunity to track closer to the East Coast midweek.

In any case, dangerous surf and rip currents are likely along the East Coast beaches this weekend and into next week. A group of simulations from the GFS (blue) and Euro (red) weather models (0Z Thursday). Each line represents a different simulation with slight tweaks to initial conditions. This gives us an approximation of the different possibilities in Maria’s future track. (stormvistawxmodels.com)

Hurricane Maria tore across Puerto Rico on Wednesday, unleashing destructive winds, which knocked out power to the entire island, and “catastrophic” flooding.

Even though the winds had diminished somewhat Wednesday evening, torrential rain over Puerto Rico had emerged as the most severe danger. The National Weather Service in San Juan reported incredible rainfall rates of up to 5 to 7 inches per hour Wednesday morning. The Hurricane Center described ongoing flash flooding as “catastrophic.” Rivers on the island had rapidly risen, some reaching record levels in a matter of hours.

On Thursday morning, 10 of 27 river gauges on Puerto Rico were reporting “major flooding” and flash flood warnings covered all but the southwest portion of the island.

Rainfall estimates exceed 20 inches in most areas. Some gauges recorded amounts to around 30 inches, including 33.58 inches in La Plaza, and 28.70 inches in Cidra.

As the storm made landfall early Wednesday morning along the southeast coast of Puerto Rico, a National Ocean Service tide gauge at Yabucoa Harbor, Puerto Rico, reported a rise of 5.3 feet above the normal high tide.

Wind reports became scarce by 8 a.m. as wind sensors and/or their transmission signals failed, but numerous locations clocked gusts over 110 mph, including in San Juan.

Early Wednesday morning, sustained winds reached 106 mph and gusts were reported up to 137 mph in St. Croix. Between 10 and 11 p.m. Tuesday, St. Croix’s airport on the southwest part of the island reported gusts up to 92 mph before the wind sensor stopped reporting.

While St. Croix was hit hard and damage was extensive, the storm’s inner eyewall containing its most violent winds just missed to the south — sparing the island the worst of its fury.

The storm passed even farther to the south of St. Thomas, but social media photos showed significant flooding on the island:

When Maria slammed ashore near Yabucoa, Puerto Rico, at 6:15 a.m. Wednesday with 155 mph winds, it became the first Category 4 storm to directly strike the island since 1932. It was the first hurricane of any intensity to make landfall there since Georges in 1998.

Maria’s landfall pressure of 914 millibars in Puerto Rico was the third-lowest on a record for a hurricane striking the U.S. The lower the pressure, the stronger the storm.

On Tuesday evening, Maria’s pressure dropped to 909 millibars, ranking among the 10 lowest in recorded history in the Atlantic.

Its maximum sustained winds, which reached 175 mph, also ranked among the strongest Atlantic hurricanes on record.

[‘We have lost all what money can buy’: Hurricane Maria devastates Dominica]

In just 18 hours Monday, the storm strengthened from a minimal Category 1 storm to a Category 5 monster. Its pressure dropped 52 millibars in 18 hours, “one of the fastest deepening rates on record behind Ike, Rita, Gilbert, & Wilma,” tweeted Tomer Burg, an atmospheric science graduate student at SUNY-Albany.

Maria is the latest powerhouse storm in what has become a hyperactive hurricane season. The 2017 hurricane season has already featured four Category 4 or stronger storms; this has only happened four previous times by Sept. 18. Three of these storms made landfall in the U.S. at Category 4 intensity (Harvey, Irma and Maria), which is unprecedented in the modern record.