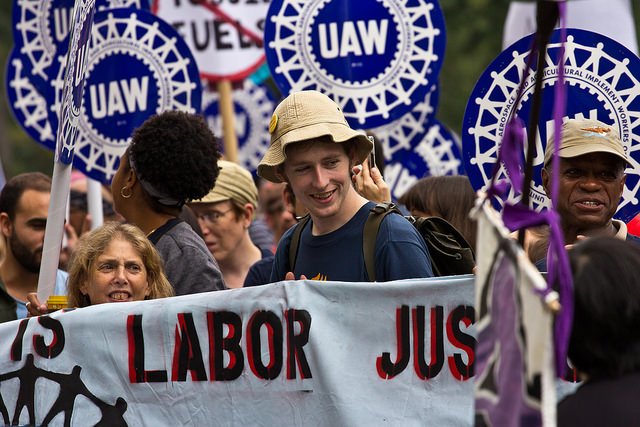 2015, only halfway over, has already been an extreme year for both labor and the climate: the Midwest and Texas are experiencing record rainfall while California is in a record-breaking drought, and 2015 is the hottest year on record so far (the standing record is from 2014), including a heatwave in India that left more than 2,300 people dead. The Obama administration continues to try and push through the Trans-Pacific Partnership on fast-track, with millions of workers livelihoods hanging in the global balance and attacks on unions like the United Steelworkers continue to threaten worker, community and environmental safety. Meanwhile, energy companies insist that drilling in the soon-to-be ice-free summertime arctic will create jobs—even as it may mean game over for the climate.

There has perhaps never been a more prescient moment to emphasize what a growing number of people already know: the fate of labor and the climate are linked. In his most recent piece for The Nation, Jeremy Brecher notes how well suited the traditions of the labor movement are to the fight for climate protection: “The labor movement’s most essential value is solidarity … that we will survive and prosper only if we look out for one another. Climate protection is the new solidarity.” Brecher, a founder of the Labor Network for Sustainability and author of Climate Insurgency: A Strategy for Survival as well as the classic labor history Strike! is at the forefront of the struggle to break down the false dichotomy of “jobs versus environment” and to fight for a just transition that puts workers at the center of a vision of climate justice.

In These Times recently spoke with Brecher to consider this central question: How do we fight for a just transition that puts workers at the center of a vision of climate justice?

What compelled you to write your latest article in The Nation?

I felt like those who observed the big impact of labor participation in the People’s Climate March didn’t have any way to find out about all the things that happened afterwards. The motivation for the article was to share that experience of what was going on, talking to the people who were doing those kinds of activities and to try to put it in some kind of context in which people could relate it to the overall strategy of bringing labor to the forefront of the climate movement.

The role of labor in the climate justice movement is a really broad and varied one, and workers and activists are starting to make connections. Some of these connections, like the one between the struggle of railroaders for safer working conditions and communities concerned about oil spills from derailing trains, are clear, but what links between the labor and environmentalist movements do you see that might be less than obvious?

Links are never obvious until someone makes the link. Take the plumbers’ and pipefitters’ unions: a few years ago, they declared themselves green building trades unions. They developed a training and certification program for green builders and sent a trailer truck around the country promoting their role in making buildings energy efficient. Because they reached out, they made the link between the work that they do and climate protection.

I did a workshop with machinists’ union workers in Windsor Locks, Connecticut, and we started talking about what they could do as workers—not only fighting for good climate policies but actually changing the kind of work they do. They started saying, “We make gauges and valves and all kinds of things that are necessary for running low-waste water systems and all kinds of infrastructure.” They made suggestions about how they could be used to fight climate change.

In Connecticut, we have a roundtable on the climate and jobs which tries to draw together trade unionists and other people who are concerned about the climate, including religious groups. We just got a new governor’s council on climate change which is working on a new climate action plan. It’s hard to keep up with the people asking how they can help out with this work as shown by all the things that have happened without any large scale organization in the wake of the People’s Climate march.

If we build a movement, we can accomplish things in our unions and industries regardless of what’s happening in Washington. There is power that doesn’t come from Congress, and we are the ones who can impose it. That certainly doesn’t mean that we don’t have to change the national political framework and the global political framework to address climate change. We can start building the building blocks even if we don’t have immediate access to the commanding heights of power.

And yet the question of political power seems paramount, not something we can just hope will work itself out. What are we actually doing now in terms of building a political alternative that has at its heart both the interests of working people and the environment?

The core starting point for me is to find a program that unites climate change and jobs and worker-friendly developments. That is a program the 99% can be organized around. Partially by doing local and national plans for worker-friendly, good job-producing climate protection strategies, and partially by drawing together the constituencies that have the strongest stake in doing that.

Linking environmentalism to higher standards of living for the working class is key. It’s far too easy for arguments for “degrowth” to be marshalled in the name of austerity. How can activists make clear that when we challenge the narrative of growth, we’re actually aiming at the elites, the corporations, and not at working people?

Both the labor movement and the environmental movement, and the world they’re embedded in, have gotten off on the wrong foot in relation to the word “growth.” If you’re saying we need less growth of bombs and pollution and poisons, then the people who say we need less growth are totally on the right track. If you say we need more growth of healthy food, good medical care, good housing for people in bombed-out areas of cities like Chicago—those people are also totally on the right track. The question of growth is confused because growth is often expressed in terms of GDP.

Efforts to reduce carbon emissions will create far more jobs than the fossil fuel industry has or could. Climate protection is far more job-intensive than carbon-based energy. The problem with that is that the jobs that are going to be lost are held by very specific people who live in very specific places and have very specific skills.

We need a general jobs program, but we also need to have time for a just transition. People have been advocating this for decades. Tony Mazzocchi, the former president of the Oil, Chemical and Atomic Workers Union, was one of the original inspirers of this way of thinking. He had a plan for a Superfund for workers. And there has actually been for the first time a significant initiative, just in the last few months, for the Power+ Plan. The most recent Obama administration budget has set aside $55 million for a program very much along the lines of the one called for by my organization, Labor Network for Sustainability. Many others have been advocating for a just transition for fossil fuel workers. They have proposals for big land reclamation activities which will employ and provide training for a lot of people and begin expanding environmental tourism and environmental, sustainable farming economy and so on. We’ve been pushing the Obama administration to do this for years; its time has finally come.

The missing piece that has to be added to a general jobs program is a just transition program to make sure that people who will be adversely affected by climate protection will not be made the butt of this program.

The companies that are in the business of destroying the atmosphere by making money off of fossil fuels have as their strongest suit money to use for ideological warfare, but coal miners are well respected culturally in the labor movement. They were at the forefront of some of the country’s most militant labor struggles. Therefore, coal companies have spent vast amounts of money making the ideological framework of climate protection all about destroying the jobs of coal miners.

A just transition will be a massive undertaking. Who should pay? Could a demand that companies who have destroyed the environment should be made to pay for job training and land reclamation be put forward?

I saw recently a proposal for putting a royalty on coal extraction to support the health and safety plan or to support various kinds of land reclamation programs. This was a similar kind of program I saw for coal miners and other coal-related workers. Something in the budget for a just transition program would be great, too. There’s no reason that various sources should not have been contributing to these workers and families who have been sacrifice zones not only for decades but also for a couple of centuries.