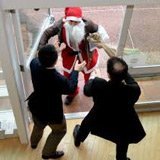 How far must we go to protect the environment?

On Monday (December 16), six “anti-capitalist” Santas from the activist group Rising Tide delivered coal to the private offices of “naughty” Port Metro Vancouver. PMV is reviewing the permit application and consultation process for the proposed Fraser Surrey Docks coal port development. This project would see the delivery of at least four million tonnes of coal by train, and then open barge to Texada Island, to be loaded onto ships and sold to Asia. The processing of coal is responsible for the dense smog like that which has forced Beijing authorities to advise people to stay indoors.