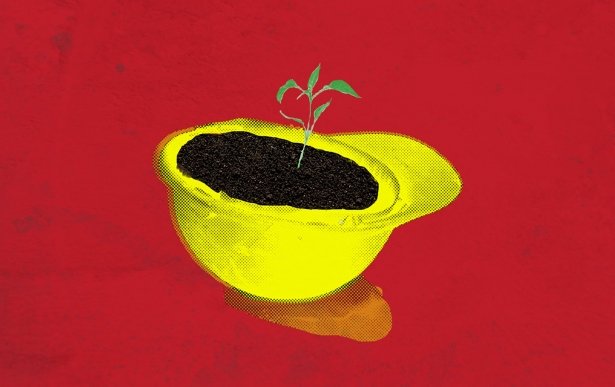 At the labor rally before the march, AFSCME District Council 37 executive director Henry Garrido recalled that during Superstorm Sandy in 2012, “Our workers were at the forefront manning shelters, evacuating people, preparing hospital beds, and rescuing people every day.” But Sandy was just a warning shot. “Labor must stand for more than working conditions,” Garrido continued. “We must stand for more than contracts. We must stand for environmental justice—otherwise, we will become irrelevant.” The issue of climate change, he concluded, is “the biggest threat to our humanity.” We can no longer afford to put our heads in the sand: “Today is the day that the human race stood together and said, ‘Enough!’”

The march’s organizers are now working to launch a People’s Climate Movement. They are planning a series of major mobilizations leading up to the Paris climate summit this December. According to Phil Aroneanu of 350.org, activists have started meeting with unions to plan labor-focused events along the way. “It is incumbent on the climate movement to lay out plans that leave nobody behind in the transition to a climate-safe economy,” Aroneanu says.

Meanwhile, labor action on climate change has proliferated. In New York, according to Matt Ryan, executive director of ALIGN (New York’s Jobs With Justice affiliate), “There is a growing surge of labor unions engaging and activating their members and their members’ communities around a climate, jobs, and justice agenda. I see it at CWA, SEIU, the Teamsters, New York State Nurses Association, and many others.”

From the moment New York organizers started planning for the climate march, they saw it as a vehicle for building a labor, justice, and environmental coalition around a green jobs program. After the march, they developed “Climate Works for All: A Platform for Reducing Emissions, Protecting Our Communities, and Creating Good Jobs for New Yorkers.” The 10-point platform, intended to help meet the city’s mandate to reduce greenhouse-gas emissions by 80 percent by 2050, would put 40,000 residents to work each year making New York’s largest buildings energy-efficient, installing solar collectors on schools, expanding public transit, and being involved in other climate-protecting projects. The plan would link city residents to job opportunities through training programs and address the housing and transportation needs of low-income New Yorkers. It was developed by ALIGN and the BlueGreen Alliance, along with such less-frequent allies as the New York City Central Labor Council, the NYC Environmental Justice Alliance, and the national AFL-CIO. The coalition pushed successfully to incorporate climate-justice demands in Mayor Bill de Blasio’s climate-action plan, which pledges to lift 800,000 city residents out of poverty or near-poverty in the next decade.

In California, Climate Workers, a project of the Movement Generation Justice & Ecology Project, conducted a tour early this year of fracking-affected communities in the Central Valley for union members and leaders, then organized a Labor Against Fracking contingent for the March for Real Climate Leadership, endorsed by locals from AFSCME, SEIU, UAW, and UNITE HERE. Last December, the California Labor Federation—along with consumer, faith, health, green-business, and environmental organizations and elected officials—participated in a California Climate Leadership Forum. Its core agenda was to protect the state’s landmark Global Warming Solutions Act and implement a new law—passed under pressure from environmental-justice advocates—requiring that 25 percent of the money from the state’s cap-and-trade program be spent to benefit low-income, high-unemployment, heavily polluted communities.

After the participation of unions in the People’s Climate March in San Diego, activists from the American Federation of Teachers, the International Brotherhood of Electrical Workers, the building trades, the nurses, and other unions formed an Environmental Caucus in the San Diego–Imperial Counties Labor Council. Their mission statement proposes to educate members and the public, build alliances with environmental and community groups, promote progressive labor/environmental legislation, and ensure that “labor’s agenda always includes an environmental focus,” and that “labor’s issues are always present in larger discussions of environmental issues.”

In Connecticut, climate and labor activists created the Roundtable on Climate and Jobs, cosponsored by the Interreligious Eco-Justice Network and the state AFL-CIO and joined by a wide range of environmental, religious, and community organizations and unions. The Roundtable, which conducts workshops on climate change at union locals, is developing a state plan for climate-protecting jobs. The Roundtable recruited the state AFL-CIO and a dozen unions to back the People’s Climate March; to work jointly to save the state’s Renewable Portfolio Standard, which requires utilities to use locally produced renewables; and to block attempts by the state’s electric utilities to reduce incentives for energy efficiency and renewables. After a Roundtable campaign to reboot the state’s climate-action program, this April Governor Dannel Malloy issued an executive order establishing a new 15-member Governor’s Council on Climate Change, which includes a representative from the Roundtable.

Economic-justice groups—including Jobs With Justice, National People’s Action, Kentuckians for the Commonwealth, the Climate Justice Alliance, and the National Domestic Workers Alliance—are making the economics of climate protection a core part of their work. Some of these efforts have converged in a platform for “Building a Movement for People and the Planet,” just published by the Campaign for America’s Future and National People’s Action. And US Labor Against the War, which played a critical role in getting the AFL-CIO to oppose the Iraq War, is partnering with climate-protection advocates in the labor movement to create strategies for conversion from military to green production. This convergence is connecting globally as well: In June, a Trade Union Climate Summit at the Murphy Institute in New York will bring together union leaders and staff from Argentina, Brazil, Canada, India, Italy, Norway, Korea, Peru, the Philippines, and Spain.

American workers and organized labor have an interest in addressing climate change and in putting millions of people to work making the transition to a climate-safe economy. But much of labor is still committed to an “all of the above” energy policy that promotes all jobs—even those destroying our climate and future. Can that change?