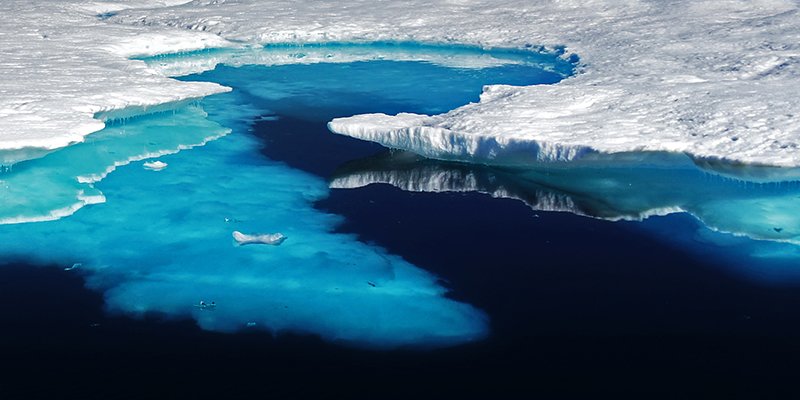 How Climate Change Could Jam The World’s Ocean Circulation

Susan Lozier is having a busy year. From May to September, her oceanographic team is making five research cruises across the North Atlantic, hauling up dozens of moored instruments that track currents far beneath the surface. The data they retrieve will be the first complete set documenting how North Atlantic waters are shifting — and should help solve the mystery of whether there is a long-term slowdown in ocean circulation. “We have a lot of people very interested in the data,” says Lozier, a physical oceanographer at Duke University.

A similar string of moorings across the middle of the Atlantic, delving as deep as 3.7 miles from the Canary Islands to the Bahamas, has already detected a disturbing drop in this ocean’s massive circulation pattern. Since those moorings were installed in 2004, they have seen the Atlantic current wobble and weaken by as much as 30 percent, turning down the dial on a dramatic heat pump that transports warmth toward northern Europe. Turn that dial down too much and Europe will go into a deep chill.

Researchers have been worried about an Atlantic slowdown for years. The Atlantic serves as the engine for the planet’s conveyor belt of ocean currents: The massive amount of cooler water that sinks in the North Atlantic stirs up that entire ocean and drives currents in the Southern and Pacific oceans, too. “It is the key component” in global circulation, says Ellen Martin, a paleoclimate and ocean current researcher at the University of Florida. So when the Atlantic turns sluggish, it has worldwide impacts: The entire Northern Hemisphere cools, Indian and Asian monsoon areas dry up, North Atlantic storms get amplified, and less ocean mixing results in less plankton and other life in the sea.

Paleoclimatologists have spotted times in the deep past when the current slowed quickly and dramatically, cooling Europe by 5 to 10 degrees C (10 to 20 degrees F) and causing far-reaching impacts on climate.

A single Atlantic Ocean current system accounts for up to a quarter of the planet’s heat flux.

Modelers have tried to predict how human-caused climate change might impact the Atlantic current, and how its slowdown might muck with the world’s weather even more. But years of intensive peering at this question haven’t yet provided much clarity.

Now, debate is raging about whether the recent Atlantic slowdown has been triggered by climate change, or is just part of a normal cycle of fast and slow currents. New studies in the last few years and months have come out supporting both prospects. The new data from the north, Lozier and others hope, might help to sort things out.

When the Hollywood blockbuster “The Day After Tomorrow” threw the Atlantic Ocean current into the popular spotlight in 2004, researchers laughed at its portrayal of an ocean current shutdown. In the movie, the world was plunged into a new ice age in a matter of days, with cold fronts literally chasing people at a sprint. But the disaster at the core of the film was based in some reality.

A huge amount of heat is moved around our planet by a single ocean current system — the Atlantic Meridional Overturning Circulation (AMOC) — which accounts for up to a quarter of the planet’s heat flux. The system is driven by density: waters that are cold or salty are denser and so dive down to the ocean floor. As a result, today, cold waters sink in the North Atlantic and flow southwards, while warm tropical waters at the surface flow northwards in the Gulf Stream, making northern Europe unusually mild for its latitude. But if northern waters get too warm, or too fresh from melting ice, then they can stop being dense enough to sink. That causes a major traffic jam for the water attempting to move north, and the system grinds to a halt.

This has happened before. Researchers have spotted dramatic AMOC slowdowns of more than 50 percent during the last glaciation some 100,000 to 10,000 years ago, over a period perhaps as short as decades. The theory —which is being debated — is that as ice sheets got too big to stay stable, armadas of icebergs broke off, floated out to sea, and melted; even though the waters were chilly, the huge influx of freshwater made them less dense, and so they stopped up the currents. Looking further back in time to the last interglacial period about 120,000 years ago, which is more like today’s interglacial world, is trickier. But a study of some proxy measurements has shown that there may have been rapid slowdowns in the last interglacial, too.

“It seems to be a fairly stable system, until we push it just the right amount and then we’re in terrible shape,” says Martin. “I don’t think you want to play with the AMOC.”

The last review by the Intergovernmental Panel on Climate Change concluded that the AMOC is very likely to slow by the end of the century, perhaps by as much as 54 percent in the worst-case scenario, where emissions keep going up and global temperatures rise about 4 degrees C. But the range of possible slowdowns in these predictions is huge, starting at just 1 percent for an emissions-restricted world.

If the North Atlantic current slows dramatically, then the entire Northern Hemisphere would cool; a complete collapse of the current could even reverse global warming for about 20 years. But the heat that ocean currents fail to transport northwards would make parts of the Southern Hemisphere even hotter. And a cooler north isn’t necessarily good news.

The jury is still out. Weakening is a possibility, but it hasn’t been proven yet,’ says one scientist.

Should the AMOC shut down, models show that changes in rainfall patterns would dry up Europe’s rivers, and North America’s entire Eastern Seaboard could see an additional 30 inches of sea level rise as the backed-up currents pile water up on East Coast shores.

But to pin down what the AMOC is going to do, researchers need to better understand what it’s doing right now. And that is proving tricky.

The problem researchers face is that the AMOC is extremely capricious, wobbling around more from year to year than the expected shift to date from global warming. Just like temperature or sea level records, this makes for a very noisy signal in which it’s hard to see long-term trends. “It’s analogous to the early difficulty seeing a global warming signature,” says Columbia University paleoclimatologist and oceanographer Jerry McManus. “Now that signature is compelling, but it took a while to see it clearly. Now that’s happening with AMOC. ”

The first string of moorings put in the ocean to investigate this current — the so-called RAPID array, with more than a dozen moorings from Florida to the Canary Islands — were deployed in 2004. They have shown a drop in water flow from 20 sverdrups (or million cubic meters of water per second) to 15 sverdrups over a decade. But the variability is huge. In 2009 to 2010, for example, the current was particularly sluggish for some reason, with water transport dropping by about a third. That helped to make the next winter the coldest for the United Kingdom since 1890, with heavy snowfalls and travel chaos. And from New York to Newfoundland, sea levels were boosted by five inches. Lozier’s data from the northern part of the ocean — in an array called OSNAP — will add a missing piece to the puzzle of what the current is up to.

Rahmstorf et al. 2015
A pocket of cold water has formed in the northern Atlantic Ocean from melting Arctic and Greenland ice. Scientists say it has the potential to disrupt ocean circulation.

Actual measurements of the AMOC across the ocean only date back to 2004; to get a longer-term picture, researchers have to rely on other measurements to infer ocean current. Last year, Stefan Rahmstorf, of the Potsdam Institute for Climate Impact Research in Germany, grabbed media headlines with a paper looking at sea surface temperature as a proxy for current. That study argued that the Atlantic current has slowed more since 1975 than at any point in the last thousand years, creating an obvious chilly blob over the North Atlantic — one of the only spots on the planet that’s actually cooling. The slowdown started in about the 1930s, Rahmstorf says, strongly suggesting that mankind is to blame.

Others aren’t yet convinced. “The jury is still out,” says Lozier, who notes that sea surface temperature is a messy proxy for current. “Weakening is a possibility, but it hasn’t been proven yet,” agrees Laura Jackson of the UK’s Met Office, who studies the AMOC.

Jackson’s own work in a special collection of papers about ocean circulation in Nature Geoscience this July showed that the AMOC has a decadal oscillation that naturally makes it swing from high to low flow. The mechanisms behind that aren’t well understood, but the upshot is that the slowdown seen since 2004 could just be due to one of these oscillations. It’s also possible that both things are true: There could be a decadal-scale oscillation sitting on top of a longer-term slowdown caused by climate change.

Another paper published in that same issue of Nature Geoscience, however, suggests that the amount of meltwater from Greenland isn’t yet enough to muck with the AMOC, despite the fact that Greenland is shedding nearly 300 billion tons of water a year. “It sounds like a lot of water, but it’s going over a big area,” says Jackson. Most of the freshwater pouring into the Labrador Sea seems to be swirled off down the Canadian coast by smaller ocean currents or eddies, instead of building up and stopping the AMOC.

Ninety-nine percent of the planet’s freshwater ice is locked up in the Antarctic and Greenland ice caps. Now, a growing number of studies are raising the possibility that as those ice sheets melt, sea levels could rise by six feet this century, and far higher in the next, flooding many of the world’s populated coastal areas.
READ MORE

If the AMOC has really been slowing since about 1930 thanks to humanity’s influence on the climate, the exact way that is happening remains unclear. It could simply be the warming of Atlantic waters in critical areas, or the introduction of extra freshwater from increased rain. “We need another decade of observations, at least,” says Jackson, who also keenly awaits the OSNAP data sometime next spring. “Knowing what’s happening at high latitudes well help us determine which model is right,” she says. Meanwhile a third line of moorings in the South Atlantic, from Brazil to South Africa, should start to highlight what’s happening at the other end of the ocean.

For now, everyone awaits more data to see whether the AMOC is slowing down and, if so, what that will mean for the planet. “It’s complicated because there are feedbacks, and we don’t understand them all. Some could be positive; some could be negative,” says Jackson. But, Jackson adds, “The general feeling is, ‘Don’t panic.’