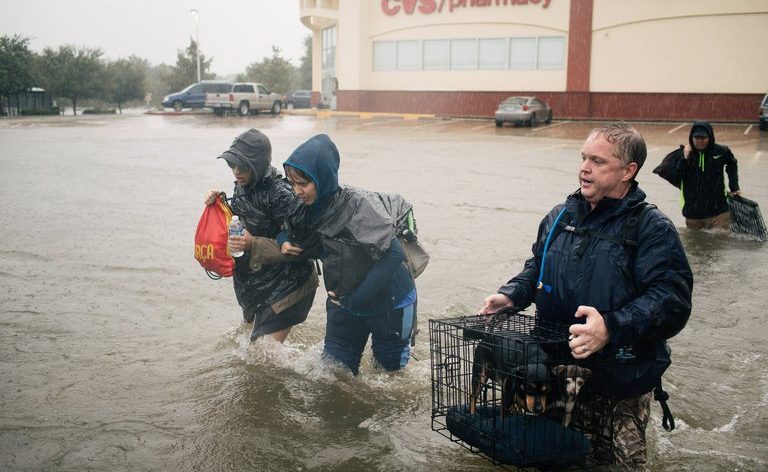 In Houston, Anxiety and Frantic Rescues as Floodwaters Rise

HOUSTON — What felt like an apocalyptic onslaught of pounding rains and rapidly rising floodwaters brought the nation’s fourth-largest city to its knees on Sunday, as highways and residential streets turned to rivers, waist-high waters choked off access to homes and hospitals, and officials begged boat owners to pitch in with an enormous and frantic rescue operation.

It was a scene that evoked Hurricane Katrina in Louisiana in 2005, with worried residents punching holes in roofs in anticipation of the water rising even higher and people being rescued by helicopters from soggy rooftops.

The chaos inflicted by the remains of Hurricane Harvey played out across an enormous swath of Texas, most conspicuously in this metropolitan area of 6.6 million that has long been used to major storms blowing in off the Gulf of Mexico, but that has seldom, if ever, faced a scene quite like this one.

The storm, which made landfall late Friday as a Category 4 hurricane, has so far left five people reported dead, many others injured and untold numbers of homes and businesses flooded, damaged or destroyed on both the coast and far further inland. Even the National Weather Service seemed overwhelmed by the scope of the devastation.

“This event is unprecedented & all impacts are unknown & beyond anything experienced,” the federal service said on Twitter on Sunday. “Follow orders from officials to ensure safety.”