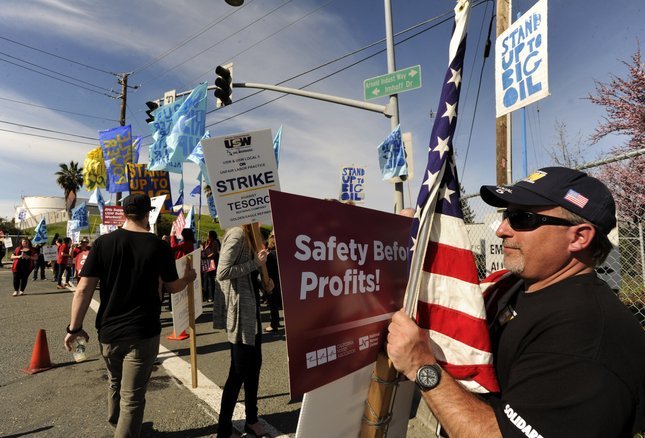 PACHECO — A tanker truck slowed to a halt 10 yards from a group of oil workers, nurses and environmentalists holding signs at the intersection of Arnold Industrial and Solano ways just before noon Tuesday.

The group blocked the tanker’s entrance to the Tesoro Golden Refinery, keeping the driver from delivering his product. For 10 minutes, the two sides essentially stared each other down, the driver talking with a representative of the pickets.

Then, he backed up the truck and turned it around. Those with the signs cheered. For Tesoro refinery workers, it was a win on a day that nurses from the California Nurses Association and members of the Communities for a Better Environment joined them in the first strike by United Steel Workers in more than three decades.Strikers picketed outside the refinery as the nationwide strike continued late into its second week.

The steelworkers’ union on Feb. 1 called for workers at nine of its plants — including Tesoro — to walk out to protest safety conditions, health care costs and the use of outside contractors for maintenance.