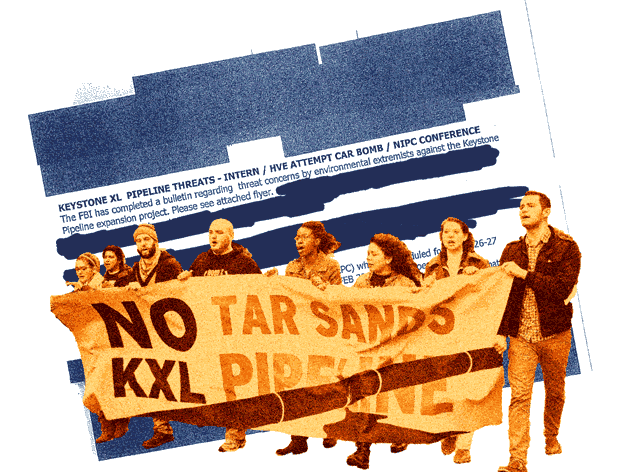 Heard about the FBI tracking of Keystone XL activists? It’s worse than you thought.

The energy industry is now firmly hitched to the national security state.

Not long after the bulletin was distributed, a private security firm providing intelligence reports to the Pennsylvania Department of Homeland Security cited the FBI document in order to justify the surveillance of anti-fracking groups. The same security firm concluded that the “escalating conflict over natural gas drilling in Pennsylvania” could lead to an increase in “environmentalist activity or eco-terrorism.”

Since the 2010 FBI assessment was written, the specter of environmental extremism has been trotted out by both law enforcement and energy-industry security teams to describe a wide variety of grassroots groups opposed to the continued extraction of fossil fuels. In 2011, the Royal Canadian Mounted Police (RCMP ) published a report titled, “Environmental Criminal Extremism and Canada’s Energy Sector.” The RCMP warned that environmental extremism posed a “clear and present criminal threat” to the energy industry. While both the FBI and RCMP reports make an effort to distinguish between lawful protest and criminal activity, they often conflate the two – in the RCMP report the terms “violence” and “direct action” are used interchangeably – and suggest opposition to the energy industry will lead to extremism. (The FBI’s Counterterrorism Division declined to answer questions about the 2010 bulletin.)

Yet even as the resistance to “extreme energy projects” has grown in size and scope, there is little evidence to support the breathless warnings about “eco-terrorism.” There has been no upward spiral in criminality among environmental activists. To the contrary, arson, property destruction, and other acts of violence most closely associated with the radical animal rights movement of the 1980s and 1990s have become all but nonexistent. According to figures compiled by the Global Terrorism Database (GTD) at the University of Maryland, there has been only a handful of incidents defined as eco-terrorism since 2010. In fact, between 2010 and 2013, the latest year for which the GTD has published figures, out of a total of 54 terror incidents in the United States, five were attributed to the Animal Liberation Front. The last recorded incident carried out by the Earth Liberation Front – the bulldozing of two radio transmission towers in Washington – was in 2009. Earth First! hasn’t appeared in the database since 1994.

Instead, environmentalists have largely relied on classic social change strategies such as choreographed nonviolent civil disobedience, carefully planned protests, and divestment from the fossil fuel industry. “Overall we’ve seen a decline in activity, in terms of violent criminal activity” among environmentalists, an FBI intelligence analyst told The Washington Post in 2012.

Nevertheless, the FBI, the Department of Homeland Security, and many state law enforcement agencies continue to promote the idea that environmental extremism is on the rise. The oil and gas industry is spending more on security than it ever has. According to a 2013 report by Frost & Sullivan, a marketing research and consulting company, annual spending on global oil and gas infrastructure security is expected to top $30 billion in just a few years. (In comparison, $30 billion is roughly what South Korea spends on defense annually.) “Surveillance will continue to dominate the oil and gas infrastructure security market,” a summary of the report states.

At the same time, numerous intelligence-sharing networks between the private sector and law enforcement have been established at every level of government, giving rise to an unprecedented energy-intelligence complex. They range from project-specific and regional networks like the Nebraska Information Analysis Center’s Keystone Pipeline Portal community and the Marcellus Shale Operators’ Crime Committee, to federal programs like the FBI’s Oil and Natural Gas Crime Issues Special Interest Group and the Department of Homeland Security’s Oil and Natural Gas Sector Coordinating Council. These public-private partnerships, coupled with a revolving door between intelligence agencies and the more lucrative energy industry, have created a new kind of foe for the environmental movement. The fossil fuel industry is now an economic behemoth firmly hitched to the national security state.

It is true that environmentalists pose a threat to the energy industry – just not in the way the FBI or RCMP believe. The threat to the industry is existential and economic, not extremist. If the movement to end our reliance on fossil fuels prevails, the oil and gas industry will lose trillions of dollars in forecast profits. According to an estimate by the Carbon Tracker Initiative, if we hope to avoid the worst impacts of global warming, the energy sector would have to leave more than $20 trillion worth of fossil fuels in the ground. “The oil and gas industry is doing everything they can to ensure they’re in business for the next 30 to 50 years and doing so at a time when we should be, as a nation, collectively figuring out how to stop using those same fossil fuels over the next ten years,” says Wes Gillingham, program director of Catskill Mountainkeeper.

Conflict between fossil fuel interests and environmentalists is inevitable. But as the contest becomes ever more stark, there seems to be little effort to distinguish between lawful political activism and illegal activities. The fossil fuel industry’s reasonable concerns about the strength of its political opponents have morphed into a kind of paranoia, one that threatens to criminalize constitutionally protected dissent.