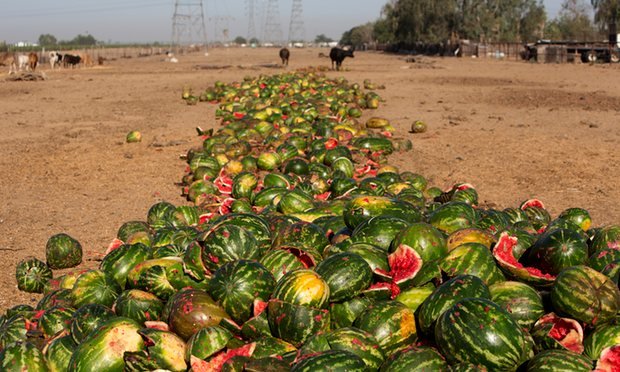 Half of all US food produce is thrown away, new research suggests

Americans throw away almost as much food as they eat because of a “cult of perfection”, deepening hunger and poverty, and inflicting a heavy toll on the environment.

Vast quantities of fresh produce grown in the US are left in the field to rot, fed to livestock or hauled directly from the field to landfill, because of unrealistic and unyielding cosmetic standards, according to official data and interviews with dozens of farmers, packers, truckers, researchers, campaigners and government officials.

From the fields and orchards of California to the population centres of the east coast, farmers and others on the food distribution chain say high-value and nutritious food is being sacrificed to retailers’ demand for unattainable perfection.

“It’s all about blemish-free produce,” says Jay Johnson, who ships fresh fruit and vegetables from North Carolina and central Florida. “What happens in our business today is that it is either perfect, or it gets rejected. It is perfect to them, or they turn it down. And then you are stuck.”

By one government tally, about 60m tonnes of produce worth about $160bn (£119bn), is wasted by retailers and consumers every year – one third of all foodstuffs.

But that is just a “downstream” measure. In more than two dozen interviews, farmers, packers, wholesalers, truckers, food academics and campaigners described the waste that occurs “upstream”: scarred vegetables regularly abandoned in the field to save the expense and labour involved in harvest. Or left to rot in a warehouse because of minor blemishes that do not necessarily affect freshness or quality.

When added to the retail waste, it takes the amount of food lost close to half of all produce grown, experts say.

“I would say at times there is 25% of the crop that is just thrown away or fed to cattle,” said Wayde Kirschenman, whose family has been growing potatoes and other vegetables near Bakersfield, California, since the 1930s. “Sometimes it can be worse.”

“Sunburnt” or darker-hued cauliflower was ploughed over in the field. Table grapes that did not conform to a wedge shape were dumped. Entire crates of pre-cut orange wedges were directed to landfill. In June, Kirschenman wound up feeding a significant share of his watermelon crop to cows.

Researchers acknowledge there is as yet no clear accounting of food loss in the US, although thinktanks such as the World Resources Institute are working towards a more accurate reckoning.

Imperfect Produce, a subscription delivery service for “ugly” food in the San Francisco Bay area, estimates that about one-fifth of all fruit and vegetables are consigned to the dump because they do not conform to the industry standard of perfection.

But farmers, including Kirschenman, put the rejection rate far higher, depending on cosmetic slights to the produce because of growing conditions and weather.

That lost food is seen increasingly as a drag on household incomes – about $1,600 a year for a family of four – and a direct challenge to global efforts to fight hunger, poverty and climate change.

Globally, about one-third of food is wasted: 1.6bn tonnes of produce a year, with a value of about $1tn. If this wasted food were stacked in 20-cubic metre skips, it would fill 80m of them, enough to reach all the way to the moon, and encircle it once. Taking action to tackle this is not impossible, as countries like Denmark have shown.

The Obama administration and the UN have pledged to halve avoidable food waste by 2030. Food producers, retail chains and campaign groups such as the Natural Resources Defense Council have also vowed to reduce food loss in the ReFED initiative.

Food experts say there is growing awareness that governments cannot effectively fight hunger, or climate change, without reducing food waste. Food waste accounts for about 8% of global climate pollution, more than India or Russia.
“There are a lot of people who are hungry and malnourished, including in the US. My guess is probably 5-10% of the population are still hungry – they still do not have enough to eat,” said Shenggen Fan, the director general of the International Food Policy Research Institute in Washington. “That is why food waste, food loss matters a great deal. People are still hungry.”
That is not counting the waste of water, land and other resources, or the toll on the climate of producing food that ends up in landfill.
Within the US, discarded food is the biggest single component of landfill and incinerators, according to the Environmental Protection Agency. Food dumps are a rising source of methane, a far more powerful greenhouse gas than carbon dioxide. But experts readily acknowledge that they are only beginning to come to grips with the scale of the problem.