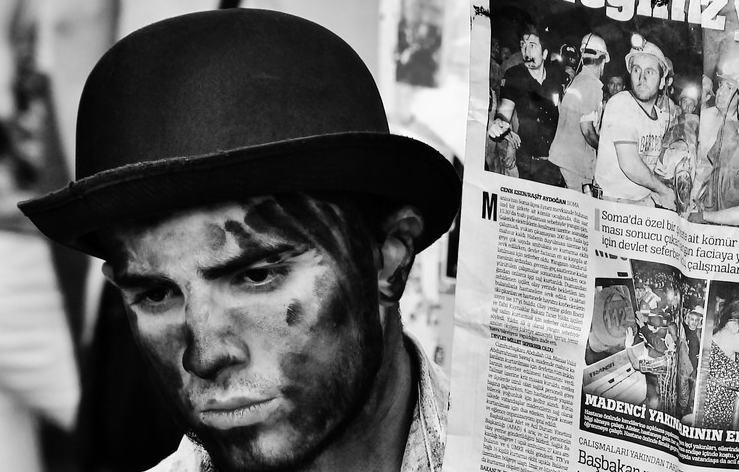 On the ground report: Turks hit the streets following mine disaster

Can you describe the general atmosphere in Turkey at the moment? Where do you see the protests going from here? Any predictions for what the summer might hold?

The protests are going on. I just came from one of them. Remarkably the cops didn’t attack us this time around.

But I’m sure the government is preparing a political attack on us, because Soma unveiled the AKP’s real face to people who are workers, people who voted for the AKP: the AKP is a rich people’s party. The AKP is collaborating with the bosses against workers. The AKP is covering and helping all bosses.

You can’t believe what they did. People in Soma people hissed and protested at Tayyip’s words. Because he said that the people who protest him are bad-mannered and presumptuous. Then a lot of the people of Soma started to protest him. Then the despot’s entourage beat someone in a supermarket while saying “Why are you running away, İsraeli semen?” The AKP’s spokesman denied these words. But we know what we heard. After that the bodyguards attacked this guy.

But now, the guy who was beaten by Tayyip’s bodyguards has started to say “He was helping me”.* Can you understand the fear? Can you understand pressure on this guy? Maybe they offered to bribe him while they were threatening him? This is not a dictatorship. This is a regime becoming despotic. An under-secretary of the despot kicked a miner’s relative. I could tell you a lot more about the disgusting affairs during Soma.

The government dispatched some Islamic dervishes into Soma. They told people in Soma that they shouldn’t riot and they should obey the government. You know Marx said “Religion is the sigh of the oppressed creature, the heart of a heartless world, and the soul of soulless conditions. It is the opium of the people.” This is exactly what’s happening here.

Now, we are trying to expose the AKP’s behaviour to the workers who voted for them. But the demonstrations are not useful for this purpose. We need different facilities. Such as mass strikes, such as a self-organized workers’ movement etc.

What is the relationship of the Gezi protests to the Soma protests? Clearly, there is no doubt that even if Gezi never happened, of course the Soma disaster would have brought people onto the streets. However, do you think the Gezi movement has influenced how the Soma protests have developed?

If Gezi never happened, the anger at mass murder at Soma could not have burst forth from the people. Or the demonstrations would be limited to a few meetings. But now, the anger has spread into even high schools, especially in Istanbul and other big cities. And then the anger started to melt into the workers who voted for the AKP and their families. They started to listen to us. And I think this will continue if the government can’t manage to contain it using ideological vehicles.

Tell us about the most recent general strike. All four union confederations called a one-day strike, but how many workers came out in total? Did it spread beyond the unions?

We don’t know how many workers came out. The unions don’t release this data and I’m sure that they don’t know, either. But this strike was bigger than any in the past since 13 years. We know that every union-organized factory joined the ceremony for Soma. Some of them came out, some of them made do with the ceremony.

One day before the strike, whole unions declared they would arrange only some demonstrations. And then a lot of people protested against the unions since they didn’t call a strike. At first, only the educational workers’ union accepted the strike. Then the officers’ union – KESK, then DİSK. Latest, the biggest union, Türk İş, accepted the strike. It’s a shame because this is the confederation that organized the mine. By the way, they said they would come out for only 3 minutes at the beginning.

Was there a union at the Soma mine or any type of worker organisation generally? If there was a union, what was its relationship to mine management and state safety regulators?

A union in the Türk-İş confederation organized this mine – but the union is only nominally organized there. This is extraordinarily common in Turkey. Every union bureaucrat has close relationships with the owner of the mine. And whole of the state safety regulators take bribes. You can’t trust them. If you find an honest one, you can be sure that he or she will almost always be fired or exiled to another job such as forest guard or admin worker.

How has the Soma disaster affected the Kurdish regions of Turkey and Kurdish movements in the country generally?

Common angry and grief unites the two nation again and again. This time around, there were a lot of demonstrations and semi-strikes in Kurdistan too. And the cops broke up the demonstrations just like in other cities.

Finally, a history question: prior to the military coup in 1980, Turkey was a deeply divided country with regular outbreaks of class struggle and social unrest. Do you think that legacy is being felt now? How does this latest generation of protesters relate to Turkey’s older generations of militants?

I think the real cause of the demolition of the left was not 1980 coup. Even in 1989-1990, mass strike waves occurred here. The radical groups were humming, the unions were more radical, and so on. But then the waves receded step by step. I think the real causes were the Kurdish guerrilla movement and the disarray created by the collapse of USSR. The left didn’t answer these questions properly. Nationalism was on the rise in the society, but the left was not able to react against this nationalism.

The AKP, once they came to power, politicized every part of society by either attacking them or supporting them with their own hands. Now, the AKP has started to swallow its own bitter medicine. After the “peace negotiations” between the government and Kurdish leadership, and of course after the Gezi riots, we have a new protestor generation.

The older generation of militants and their opinions, their ideals and their organizations are barriers against the self-organised ideas. The old left organizations or parties in Turkey are extraordinarily populist. Of course we have a few open-minded figures and a few groupuscules promoting self-organisation. But they are not able to affect bigger organizations and parties. So the legacy is passing to the new generation quickly, but the new generation can’t criticize the old generation properly yet. Hero-worship is prevalent, ones who dare to criticize old heroes have been damned and isolated quickly, and so on. But, I have to say that, every renegade starts to curse old left heroes generally. So, it’s normal that it’s difficult to draw a line between the renegades and the critical militants for the new generation.

And of course, we are trying to create a new self-organised generation of militants.

*At the time of writing, the man in question has switched to his original story, stating that he was assaulted by Ergogan.