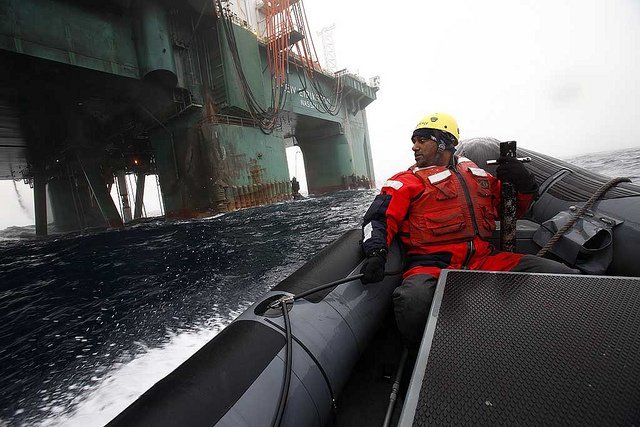 Early on Tuesday, 30 people occupied a rig owned by Russian energy company Gazprom while it sat in the Dutch port of Ijmuiden. According to Greenpeace, after five hours the activists were forced off the boat—which was headed to drill in the Pechora Sea. They were detained and remain under arrest.

Meanwhile, off the coast of Norway, 15 people boarded a drilling rig that is contracted by Norwegian company Statoil approximately 109 miles away from the Bear Island nature reserve. According to Greenpeace, the occupation is ongoing and is not being resisted by the rig’s crew. The ship had been recently given the okay to drill in the Barents Sea after a government hiatus following a complaint from Greenpeace.

“The Arctic matters to us all, and protecting it demands a truly global response,” said Greenpeace International Arctic campaigner Ben Ayliffe. “We cannot let a reckless club of international oil companies hunt for the last drops as the ice melts away.”

Part of a global campaign to stop offshore drilling and unsustainable fishing in Arctic waters, these developments follow similar direct actions launched by Greenpeace, including those of the “Arctic 30” last year.

LONDON – May 27 – Greenpeace activists from 12 countries blocked two separate oil rigs destined to drill in the Arctic ocean in the early hours of Tuesday morning. The environmental group said that the threat to the rapidly melting Arctic from a group of international oil companies requires ‘a truly global response’. A group of 30 activists in the Dutch port of IJmuiden occupied the GSP Saturn, a rig contracted by Russia’s state owned energy company Gazprom on its way to the remote Pechora sea. They were removed after five hours and six activists remain under arrest.

Another group of 15 is currently occupying the Transocean Spitsbergen, under contract to Norway’s state owned company Statoil as it prepares to drill the world’s northernmost well in the Barents Sea. Both Gazprom and Statoil’s projects are taking place deep inside the Arctic circle.

“The Arctic matters to us all, and protecting it demands a truly global response. We cannot let a reckless club of international oil companies hunt for the last drops as the ice melts away. The websites of Shell, Gazprom or Statoil might look different but their willingness to ignore the reality of oil spills and the human cost of climate change is exactly the same.

“Shell has already shown just how difficult it is to work in the US Arctic, where extreme cold and remote conditions led to a series of embarrassing failures . Over five million people are now telling these companies that Arctic drilling isn’t worth the risk, either to the environment or their own reputation.”

Greenpeace is calling for a ban on offshore oil drilling and unsustainable industrial fishing in icy Arctic waters, as well as a protected sanctuary around the North Pole. In September last year, the arrest and imprisonment of the ‘Arctic 30’ – a group of peaceful activists and freelance journalists – led to an international outcry and a renewed focus on Arctic oil development.

Since the campaign began the French oil company Total has ruled out drilling for oil in the offshore Arctic, its CEO recognising that ‘a spill would do too much damage to the image of the company’. Russian oil giant Lukoil has also suggested it ‘wouldn’t give a kopeck’ to offshore development in the Arctic. The government of Finland last year adopted the concept of an Arctic sanctuary as official policy.

A worldwide petition at www.SaveTheArctic.org has attracted the support of over five million people, including 11 Nobel peace prize winners, Sir Paul McCartney and Archbishop Desmond Tutu.