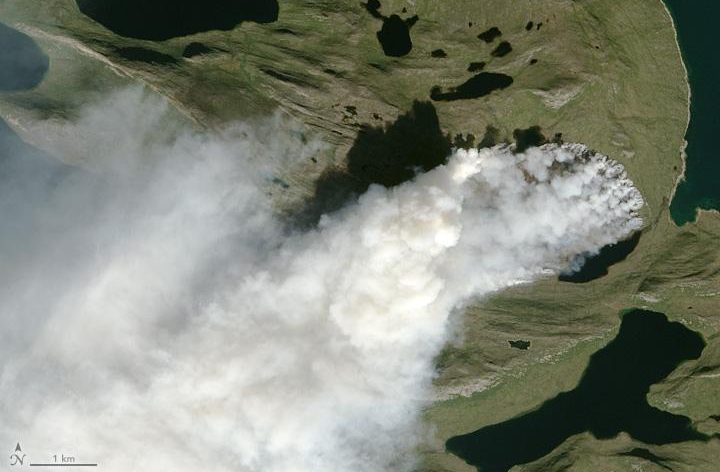 Greenland: how rapid climate change on world’s largest island will affect us all

The largest wildfire ever recorded in Greenland was recently spotted close to the west coast town of Sisimiut, not far from Disko Island where I research retreating glaciers. The fire has captured public and scientific interest not just because its size and location came as a surprise, but also because it is yet another signpost of deep environmental change in the Arctic.

Greenland is an important cog in the global climate system. The ice sheet which covers 80% of the island reflects so much of the sun’s energy back into space that it moderates temperatures through what is known as the “albedo effect”. And since it occupies a strategic position in the North Atlantic, its meltwater tempers ocean circulation patterns.

But Greenland is especially vulnerable to climate change, as Arctic air temperatures are currently rising at twice the global average rate. Environmental conditions are frequently setting new records: “the warmest”, “the wettest”, “the driest”.

Despite its size, the fire itself represents only a snapshot of Greenland’s fire history. It alone cannot tell us about wider Arctic climate change.

But when we superimpose these extraordinary events onto longer-term environmental records, we can see important trends emerging.

The ice sheet is melting

Between 2002 and 2016 the ice sheet lost mass at a rate of around 269 gigatonnes per year. One gigatonne is one billion tonnes. One tonne is about the weight of a walrus.

During the same period, the ice sheet also showed some unusual short-term behaviour. The 2012 melt season was especially intense – 97% of the ice sheet experienced surface melt at some point during the year. Snow even melted at its summit, the highest point in the centre of the island where the ice is piled up more than 3km above sea level.

In April 2016 Greenland saw abnormally high temperatures and its earliest ever “melt event” (a day in which more than 10% of the ice sheet has at least 1mm of surface melt). Early melting doesn’t usher in a period of complete and catastrophic change – the ice won’t vanish overnight. But it does illustrate how profoundly and rapidly the ice sheet can respond to rising temperatures.

Despite its icy image, the margins of Greenland are actually quite boggy, complete with swarms of mosquitoes. This is the “active layer”, made up of peaty soil and sediment up to two metres thick, which temporarily thaws during the summer. The underlying permafrost, which can reach depths of 100m, remains permanently frozen.