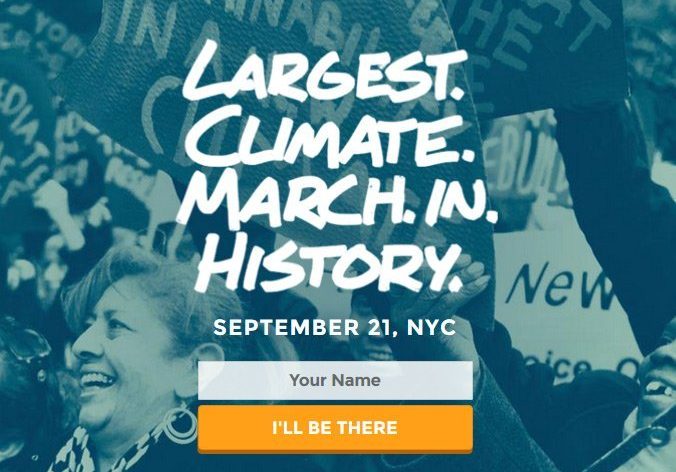 People’s Climate March: An invitation to change everything?

A very large and loud event is about to reshape New York City once again this September – and likely propel social change across the continent. A coalition of organizations under the banner of the “People’s Climate March“, has pledged to make this event in New York City an opportunity for an unprecedented climate mobilization. Offering no less than an “invitation to change everything” and to “take a stand to bend the course of history”, hundreds of diverse organizations (green NGOs, academic, peace, religious, labour, civil-rights, etc.) have already lent their names to the initiative.

The target date is September 19, 2014, when United Nations Secretary-General Ban Ki-moon is organizing Heads of State and Government, along with corporate and civil society leaders to discuss climate change. This is the first global climate meeting since the disastrous UN climate conference in Copenhagen in 2009. The meeting is not officially part of the United Nations Framework Convention on Climate Change (UNFCCC), but is a call by Ban Ki-moon to “scale-up, cooperate and deliver concrete action” and will come one year before countries attempt to conclude another global climate agreement in 2015.

The rationale for Ban Ki-moon is to sidestep the formalized discussions within regular UNFCCC processes and to challenge “those who make the decisions” which for the organizers means a heavy corporate presence. Ki-moon is providing a stage for individual leaders to make individual pledges, and declare their own ambitions (in the midst of hopelessly inadequate official response to massive evidence of impending global ecological catastrophe in the our short-term future). For organizers of a counter climate demonstration, this has all the ingredients of a perfect storm.

To gauge the Peoples’ Climate March’s potential to “change everything” it is critical to understand the context in which this is all occurring. History produces moments when objective conditions are more propitious, yet never determinative, of revolutionary change. It takes human agency to animate history, but acting in the right moment helps. In terms of objective conditions on the economic front, one need not look any further than the recent and now ubiquitous words of Thomas Piketty who explains that “when accumulated wealth grows to extreme proportions…it becomes especially destabilizing” and that since the 1980s we have had “powerful forces pushing towards divergence…towards extremely high levels of inequality.”

It is arguably much more on the ecological front that a specter is haunting global civilization. Scientists say that the combined effects of global warming and El Niño will likely make 2015 the hottest year on record. The groundwater crisis in California is but one small, although significant example of what this means for future food scarcity that will soon hit North Americans in very dramatic fashion. More generally, there are now countless series of scientific evidence and analytical pieces that reveal multiple signs that we are “already past the point of no return, headed towards a ‘dead planet'”.

In this dual economic and ecological crisis, what are the prospects for this massive convergence of people to aspire to “bending the course of history”?

At the time in 1999, “Battle of Seattle” seemed a turning point in resisting globalization and the encroachment of capitalism over community. Many who participated believed then that they were involved in a history-making moment and in fact, like the Occupy movement a decade and a half later, the actions heightened global awareness and introduced new discourses connecting capitalism and lack of democracy and austerity. The World Trade Organization (WTO) was effectively shut down by civil disobedience, but the actions were obviously not capable in the long-term to imperil the WTO or to do anything to seriously curb the global expansion of capitalism.

The 2011 Occupy movement started in Zucotti Park, New York after financial crisis exposed the enormous profits of financial institutions and bonuses to corporate executives. The financial house-of-cards they built crumbled but they were bailed out with public money while working class Americans lost jobs and their homes. People then merged into streets and began occupations of public squares. They came from many analyses, ideological stripes and issue orientations (labour, environment, religious, social justice, socialist, anarchist) but were united in the indignation of flagrant waste of the few in the midst of austerity for the many.

The Occupy “moment” became a thread (that is still active) in a movement that proliferated globally to include European and Arab cities protesting food crisis, authoritarian regimes, etc. Both Seattle and Occupy were experiments in the symbolic battle for public space. If the imperative of capitalism is to endlessly colonize and privatize the rapidly diminishing frontiers of the global commons, resistance is about reclaiming the public and human. If corporate space is symbolized by the closed boardroom high in the office tower, occupied space is signified in the outdoors on the streets by the human megaphone and ritualized demonstrations of radically participative democracy.

What each of these “moments” share is the brining together of a wide spectrum of an alternative social movement based on social critique at a systemic level.

Leading up to the Climate Convergence it would do well to remember that climate change is not the problem we are facing. To be more accurate, it is the devastatingly acute symptom of a more underlying systemic socio-economic problem that remains largely undiagnosed and ignored by those Heads of State who will be called together to reflect on these symptoms. The worry for some is that, without systemic focus by the march organizers, this event could easily turn into spectacle (see Guy Debord), or “general gloss on the rationality of the system” echoing floating signifiers of “sustainability”, “climate justice”, “good jobs” etc. but unanchored in a coherent analysis and critique of causative economic structures and social relations.

A recent post in Anarchist News makes this point forcefully. Many of the headlining groups organizing the march are “mainstream” NGOs with typically “collaborative” solutions to the climate crisis – the use of market mechanisms, individual green consumerism, progressive tax schemes, etc. which are increasingly being called into question in the light of worsening climate crisis. Calling for a “large scale anti-capitalist bloc of the march to spread subversion and unrest throughout the city” Anarchist News explains that “while we stand completely opposed to Green Capitalist alternative that these NGOs and politicians are demanding, we do not want to let this golden opportunity pass us to once again spread anarchy through New York Fucking City and beyond.”

A potentially less in-your-face but no less rigorous challenge to mainstream NGO lead march will be a conference amongst all other events that is spearheaded by Global Climate Convergence (GCC) and System Change Not Climate Change (SCNCC) and that will remind participants to connect ecological crisis to its systemic causation and solutions. “The root of the problem is an economic system”, announces its flyer “that exploits people and the planet for profit. It is a system that requires constant growth, exploitation, warfare, racism, poverty and ever-increasing ecological devastation to function.”

The GCC recently rose to prominence when it organized a series of climate actions connecting to the labour and environmental movements (the social and ecological) in a campaign called “Mother Earth Day to May Day 2014”. SCNCC, an “ecosocialist” coalition arose out of multiple socialist and activists organizations in the aftermath of Hurricane Sandy which devastated New York city. Each have extensive networks across Canada and the United States that will likely be leveraged to extend the impact of the People’s Climate March.

These two groups are part of an organized “radical left” of the environmental movement. Although allies in many important respects, the environmental left has consistently posed a challenge to the mainstream NGOs because of the latter’s strict “environmentalism”, or their apparent dissociation of the ecological crisis from its rootedness within socio-economic (capitalist) causation. In their marketing materials for the conference covergeforclimage.org they argue that “we are told new technology, market mechanisms, or individual lifestyle change will save the planet. They will not. Because they are all solutions that accommodate the system, not challenge it”.

The People’s Climate March shows much promise in its entirety. The fact that it is organizing across such a broad spectrum of civil society organizations representing the 99% from many sectors is already a symbol of systemic approaches to the economic and ecological crisis.

Successive UNFCCC negotiations have failed in the past for one reason alone. To genuinely acknowledge the problem of climate change is to recognize that not just a few things need to be changed, but that everything needs to change. The “solutions have to be large enough to deal with the problem” argues John Bellamy Foster. Foster argues the issue of climate denial needs to be turned on its head. Climate denial isn’t just the preserve of the radical right who question the science, but also the liberal “progressives”: “those who deny that it will require a revolution in our entire social system” he says.