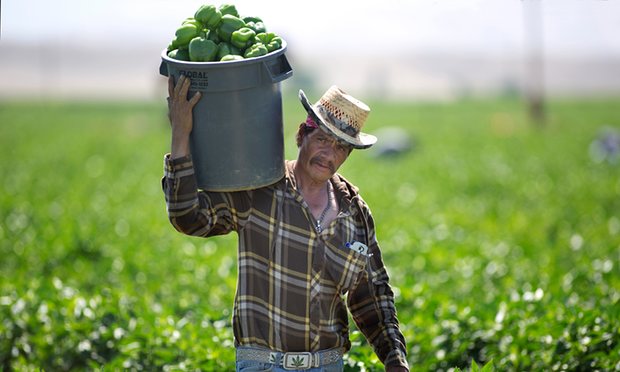 Fruits of labor: sunny California is no paradise for farmworkers

In one corner of the field, children plucked berries and mashed them into their mouths. In another they tugged carrots from the soil and waggled them in the air, squealing with delight. Others trundled around the grounds in a choo-choo train decorated as a bumble bee.

There was a cow bounce, a chicken show, an animal petting corral, a hay pyramid, a combine harvester slide, picnic tables and, depending on parental budgets, a choice of standard birthday party, deluxe birthday party and pony paddock birthday party.

No doubt about it: farming was fun. The nearest thing to Grapes of Wrath was a produce stand with fruit juice.

This was agriculture according to Underwood Family Farms, a bucolic patch of Ventura County, California, which entices families from Oxnard, Los Angeles and other nearby cities to pick their own fruit and veg and get a taste of rural life.

“The kids love it. We probably come five or six times a year,” said Michelle Engelbach, 36, pulling a wooden cart containing three young children and containers of berries. “They mow down the strawberries. It’s instant gratification.”

Around each of the scores of such “U-pick” farms in California – offering recreation, entertainment and do-it-yourself harvesting – are other farms. The big, working farms which produce much of America’s fruit and vegetables.

The juxtaposition can be startling.

Instead of mostly white children gambolling in shorts and flip-flops there are latino men and women bent over double, wearing jeans, boots and masks. They labour in silence under the gaze of supervisors, snipping, plucking, hacking, hauling and packing for up to 13 hours a day.

“You have to be fast. If you’re not, they scold you. ‘Move it, hurry up,’” said Veronica Villano, 28, a veteran Ventura County raspberry picker. “You drink water when you can but they don’t always let you.”

You drink water when you can, if you pick raspberries for a living, because you work in plastic tunnels which act like an oven, sending temperatures to 100F (37C). Great for raspberries, less so for humans.

Then there is the dust, the bee stings, the flash floods which turn the earth swampy and the pesticides and chemicals – 39 by one count – such as nitrogen fertiliser which gives her headaches. “You can smell it. I get dizzy and vomit sometimes,” said Villano.

And then there’s the pay: $10 an hour. Not enough to cover the rent on her family’s studio apartment in Oxnard let alone contribute to a nest egg for the baby that Villano, eight-months pregnant, is expecting.

Yet the Mexican immigrant still prefers raspberries to the alternatives: unemployment and penury, or the risks from strawberries.

Strawberries are even more contaminated than raspberries – they just topped the Environmental Working Group’s annual “dirty dozen” list, a shopper’s guide to pesticides in produce. Some 98% of the samples tested by federal officials had pesticide residues. Apples came second, followed by nectarines, peaches, celery, grapes, cherries, spinach and tomatoes.

Perhaps even worse, from Villano’s perspective, is that strawberries are lower to the ground, requiring perpetual squatting and crouching, a posture known as the stress position when forced on prisoners. “I can’t stand it,” she said.