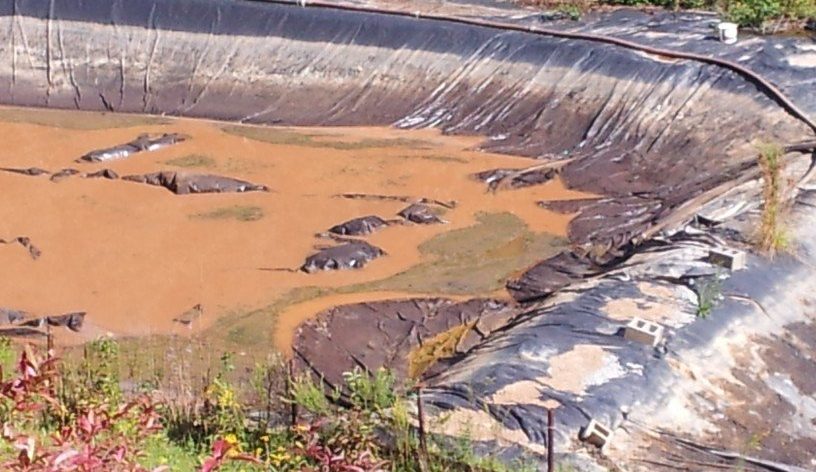 As fracking chemicals reach a creek, companies fight against a fracking waste ban

The smell of gas surrounding the northern streets of Lochgelly, West Virginia, was so pungent that Brad Keenan could taste it as he was driving home with his windows up that evening in 2004. He called 911 and the gas company, thinking a punctured gas line was to blame, but the smell and the evacuation it prompted came from something few knew existed in town: fracking waste.

“I had no idea what was going on,” said Keenan, 54, who by then had been living for two years near Danny E. Webb Construction Inc., a dumping site for fracking fluids. “You couldn’t even drive out there because the smell was so bad,” he told ThinkProgress.

At least two open pits holding fracking wastewater were responsible for the smell that got homes evacuated and forced some businesses and a daycare center to temporarily close, according to interviews and published reports. After state citations and complaints, pits were covered giving some temporary relief to affected residents. Keenan notes, however, that Wolf Creek, a major waterway traversing his 140-acre property, is polluted.

Twelve years have passed since the emergency evacuation put a little-known, state-permitted fracking disposal site under the county’s spotlight, yet things haven’t improved. The company is still marred in controversy. Locals worry about confirmed fracking chemicals in Wolf Creek as it connects to the water supply. And last year, the state renewed Danny E. Webb Construction’s permit to continue disposing fracking waste in underground injection wells, also known as brine disposal wells. The Environmental Protection Agency has jurisdiction over these wells only if diesel fuel is among the chemicals.

The feud in Fayette county is now likely to intensify with two companies facing officials who, in the coming months, will defend in federal court an ordinance approved in January that banned fracking waste disposal. Hearings were set for this month, but habitual court delays are already being reported. One argument officials have raised against fracking waste in Fayette is that zoning laws don’t even allow traditional landfills.

In interviews, officials also said they’ve revised their ordinance to appease the industry, which they say doesn’t use fracking for local gas extraction in the first place. But Danny E. Webb Construction Inc. and EQT Corp, an oil and gas company from Pennsylvania, still object saying the county lacks jurisdiction and the ordinance is so broad it could shut down gas and oil extraction.

And with that, Fayette County has become part of a growing list of communities struggling to keep brine wells at bay through local laws. There are more than 30,000 fracking waste disposal sites across the country, according to interviews and multiple published reports. But New York, Connecticut, Pennsylvania and now West Virginia have counties favoring laws limiting brine waste disposal. The trend has been particularly robust in New York, where more than 10 counties have passed ordinances controlling fracking waste in the last couple of years.

States, too, are limiting fracking waste with Nebraska creating the most recent legislation. Industry often fights back, and in some instances, they win. Last year a federal court in Pennsylvania ruled against a town’s “community bill of rights” that limited brine disposal.

In Fayette, a county of some 46,000 people, residents and officials fear Danny E. Webb Construction wells are leaching toxic chemicals into nearby Wolf Creek, a waterway that feeds into the New River, a major tourist attraction and a water source for thousands of people. West Virginia American Water, the local water utility, told ThinkProgress the water supply is being monitored and the New River Water Treatment Plant, located more than 10 miles downstream from Wolf Creek, meets high standards. Still, studies conducted in the last couple of years in Wolf Creek seem to substantiate some of the concerns. In 2014, Duke University scientists sampled Wolf Creek and found elevated levels of chloride, bromide, manganese, strontium, and barium; all chemicals associated with fracking wastewater.

Claims of leaching even got a boost this past week after a peer-reviewed study conducted by the United States Geological Survey and other universities reported endocrine disrupting chemical activity, or EDCs, in Wolf Creek at levels that could alter development and reproduction in wildlife, researchers said. After sampling various areas including a neighboring stream, scientists measured significantly greater EDCs on and downstream of the Danny E. Webb Construction site.

These revelations come at a sensitive time for the public, the government, and water utilities around the country are scrutinizing water quality after towns like Flint, Michigan, showed that local, state and federal agencies can simultaneously overlook tainted water supplies. Though unrelated to lead pollution, fracking and its effects on water have been front-and-center in recent times, too. The Environmental Protection Agency is weighing whether fracking poses risks to drinking water ahead of a report that’s been years in the making. Meanwhile, studies examining how fracking chemicals may affect water and public health are published regularly, as some property owners are winning lawsuits and getting millions from the industry for water contamination.

Yet in the case of Fayette, researchers told ThinkProgress they simply studied water chemicals, not how these chemicals got there in the first place. So while in the study researchers note the chemicals are associated with the waste disposal site, they don’t describe how pollution may have happened. “The findings do not have a direct impact on wildlife or public health, but demonstrate the potential for impacts on wildlife or public health,” said Denise Akob, one of the authors and a USGS researcher, in an email to ThinkProgress. She added the USGS is expected to release more studies on this topic as the agency is researching potential environmental impacts of unconventional oil and gas waste.