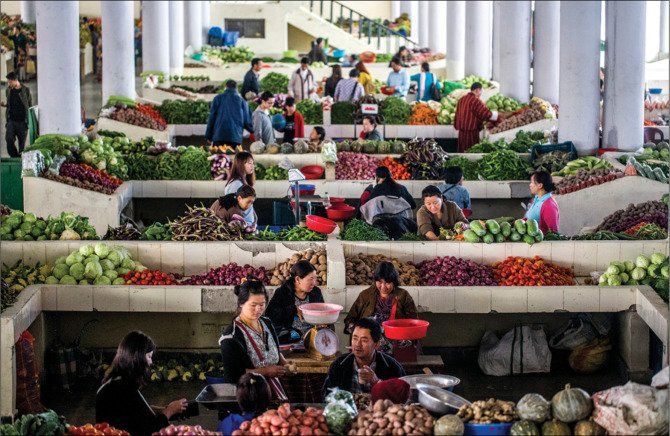 According to the Intergovernmental Panel on Climate Change, the effects of climate change on food security could be some of the most serious in the near-to-medium term, especially if global mean temperature increases by 3–4°C or more.1, 2 In The Lancet, Marco Springmann and colleagues3 dig deeper, and report the most advanced projections so far of the effects of climate change on food and health for 155 regions in the year 2050. The researchers drew on a rich mixture of emission trajectories, socioeconomic pathways, and possible climate responses to model effects on global production, trade, and consumption. Country-level estimates of food consumption were linked to a comparative risk assessment to calculate change in the number of deaths attributable to climate-related changes in diet and bodyweight. The reference scenario was a world without climate change.

The headline is that climate change will slow progress, cutting the anticipated improvement in food availability by about a third (per-person reductions of 3·2% [SD 0·4%] in global food availability, 4·0% [0·7%] in fruit and vegetable consumption, and 0·7% [0·1%] in red meat consumption), and that these changes will be associated with about 529 000 (95% CI 314 000–736 000) additional deaths in 2050. This is a 28% (95% CI 26–33) reduction in the number of deaths that would be avoided because of changes in dietary and weight-related risk factors between 2010 and 2050. The study by Springmann and colleagues is the first to assess the effect of changes in diet composition under climate change, and finds that dietary changes, especially reductions in fruit and vegetable consumption, have a much greater effect on health worldwide than the loss of calories. Most climate-related deaths are projected to occur in south and east Asia.

Climate change will have some positive effects, according to this study, such as a reduction in the prevalence of overweight and obesity in some countries compared with what would be expected with unimpaired growth in food availability. However, the saving of about 260 000 fewer deaths in 2050 is balanced almost exactly by an increase in the number of deaths caused by people being underweight worldwide (266 000 additional deaths [95% CI 203 000–329 000]). Moderation of increases in emissions of climate-active pollutants will have health benefits: the numbers of diet-related and weight-related deaths attributable to climate change are reduced by about 30% when medium-climate-change scenarios (representative concentration pathways [RCPs] 6·0 and 4·5) are applied, instead of the high-end RCP8·5 scenario.

An analysis of this type is not straightforward, and perhaps the most important and most difficult issue is the timescale. Projections of climate-related effects are compounded with uncertainties resulting from variations in emissions pathways, climate responses to raised concentrations of greenhouse gases, effects on natural systems, and the sensitivity of human populations to environmental change.4 These uncertainties mean that the further into the future models are driven, the less accurate or precise are the outputs. Accordingly, many assessments of climate change, including that by Springmann and colleagues,3 focus on the next few decades. But what if there is good reason to believe the greatest risks lie further out, beyond 2050?

The UK Foreign and Commonwealth Office recently co-sponsored a study to investigate what the worst-case outcomes of climate change might be, and where and when intolerable damage might occur.5 Following the RCP8·5 pathway, it was estimated that moderate-to-heavy-intensity work outdoors, as is necessary for agriculture, would more likely than not be physiologically impossible during the hottest month of the year in northern India in the early part of next century.5 The study also estimated that failure of the rice crop in southern China due to high temperature stress can change from a 1 in more-than-100-year event to become a 1 in 10-year event under a scenario of 2–3°C global warming and a 1 in 4-year event in the case of 5–6°C global warming.5 Such extreme, but not implausible, effects on food production6 are missing from the analysis by Springmann and colleagues.

Restriction of our view of the consequences of climate change to what might happen in the next 30–40 years is understandable in terms of conventional concerns with data quality and model stability, but might underestimate the size of future risks, and therefore undervalue present actions needed to mitigate and adapt. A worst-case analysis is not unusual in risk assessments in other areas when the stakes are high—those responsible for national security, high-level decision making in the insurance industry, and business planning take seriously the possibility of devastating outcomes, even if such events seem unlikely and are difficult to quantify.

Another challenge for global assessments is to paint a big picture that has value at a country level. Because of data restrictions, many smaller nations are missing from the results presented by Springmann and colleagues. Some, such as the small Pacific island states, are especially vulnerable to climate effects.7 Moreover, between-country associations might not be a good guide to what happens within countries. For example, food availability is positively related to body-mass index internationally, but within high-income countries the highest prevalence of obesity is often seen in socially disadvantaged groups who are comparatively food insecure.8

In December, 2015, in Paris, governments agreed for the first time on an international response to climate change—one that includes nearly every country and accepts the need to hold warming by 2100 to 2°C above pre-industrial levels, and if possible to no more than 1·5°C above these levels.9 Governments agreed that global emissions will peak “as soon as possible” and then fall rapidly to reach zero net emissions in the second half of this century. To achieve such ambitious goals, the world must make radical changes in the use of energy. Without due care, responses to climate change could have greater effects, in the short term, than climate change itself. Fossil energy is a major input into food production through nitrogen fertiliser and irrigation, and to find ways of reducing emissions without damaging health will be a challenge. Expanded use of biofuels might compete with food crops, carbon-pricing regimes could aggravate food insecurity in the poorest populations, and culling of livestock to control methane emissions might be detrimental unless alternative sources of protein, energy, and nutrients are available.10, 11 Springmann and colleagues3 have moved the climate and food debate in a necessary direction by highlighting both food and nutritional security, but a mountain of policy-relevant questions remain that require close scrutiny.

We declare no competing interests.