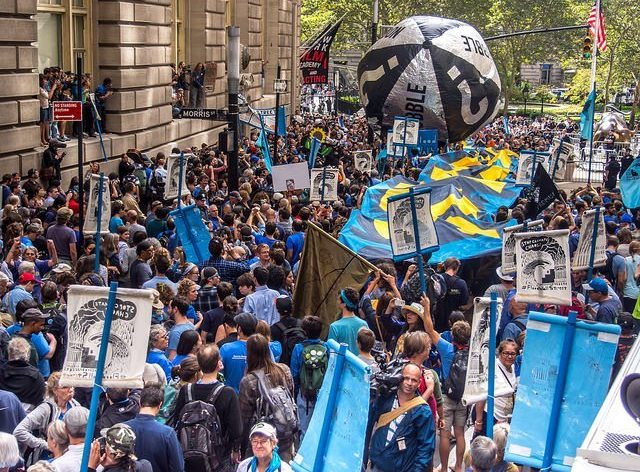 The trial begins Monday, March 2 in New York City for eleven activists who are refusing to plead guilty to disorderly conduct and pay fines for taking part in a climate sit-in in Manhattan’s Financial District last September. The Flood Wall Street Eleven plan instead to use their trial to illustrate that the bankers who finance climate change are the real harbingers of disorder. Below is a collective statement from the group. Sign a petition in their support here.

In order to solve a problem, you must first identify its’ source. . .

On the day after the Peoples’ Climate March, facing a disaster of planetary proportions, we sat down on Broadway and Wall St. to carve out a space at the source of our destruction, and to highlight the central role that Wall Street plays in fueling climate change. After holding the street for eight hours, police arrested over one hundred people – including a polar bear and two Captain Planets – and charged us with two counts of disorderly conduct. These charges carry maximum penalties of 15 days in jail and $500 in fines.

We could have taken the State’s usual script for people who engage in civil disobedience – dropping the charges in return for a promise to be quiet and not directly inconvenience capitalism for six months. Given that our “leaders” have failed to seriously address climate change since it was first brought to public attention a quarter-century ago, we collectively decided to continue our action in court by pleading “not guilty” and pursuing a necessity defense. Standing up to those who threaten our existence is not disorderly, but a responsibility as citizens of this planet. The corporations who are perpetuating the climate crisis should be on trial not the people who try to stop them.

Thanks to the work of scientists, we now know that there have been five mass extinction events in Earth’s history – all but one of which coincided with increases in global temperatures and in the levels of carbon dioxide in the atmosphere. In the two centuries since the beginning of the Industrial Revolution, CO2 levels have spiked by 42 percent and are now at 400 parts per million (ppm), the highest level in more than three million years. If we stay on our present course, CO2 levels could blow past 500 ppm by mid-century and push us further toward a hellishly hot future.

Despite this, Wall Street continues to bankroll oil, gas and coal companies that pursue increasingly extreme projects for bringing fossil fuels out of the ground. Wall Street also finances politicians from both major parties who refuse to do anything about climate change. When Wall St looks to the future, it sees trillions of dollars in future profits to be reaped from the continued drilling, mining, transporting, refining and burning of fossil fuels. We see our planet put at grave risk of catastrophic rising global temperatures caused by the release of more than 30 billion tons a year in heat-trapping greenhouse gasses. Wall Street’s blind drive for profit leaves us careening toward a world in which we will see more intense droughts and storms, melting ice caps, disappearing island nations, failed crops, the migration of hundreds of millions of displaced peoples and the loss of much of the Earth’s biodiversity due to species extinction.

Here in New York, we learned from Hurricane Sandy that climate change is not only a future threat to faraway lands, but also a present and growing danger to our own city. When Sandy hit two years ago, it destroyed the homes of tens of thousands of our friends, neighbors and co-workers, left hundreds of thousands without power for weeks and caused tens of billions of dollars in damage. Sandy’s surging waters also came within less than a half-mile of the steps of the very courthouse where we face trial. There’s no reason to think we won’t face similar dangers again.

If you went Jacob Riis beach this summer, you undoubtedly noticed the view obstructed by an offshore oil rig, part of a Williams Transco project that, once completed, will run a high-pressure liquid natural gas (LNG) pipeline along beaches, and right under Flatbush Ave. in Brooklyn. This oil rig is not only an eyesore, but drilling fluids from the construction are deposited on the ocean floor. The new higher-pressure pipeline threatens Brooklyn residents’ safety, as gas pipelines sometimes explode.

Our action was justified and we would do it again. The latest news from Lima, Peru where U.N. climate negotiators are currently meeting and once again failing to adequately address the climate crisis reminds us all that we cannot stand idly by when so much is at stake. Meanwhile from Massachusetts to Michigan to Manhattan, climate justice activists have invoked the necessity defense in the past 12 months. We expect this to become an increasingly common practice in the years ahead.

In our case, we urge the Judge to listen closely to the arguments we are ready to make about the existential threat Wall Street poses to the climate. Beyond what happens in the courtroom, we hope to inspire others to act boldly and take action to ensure our survival.

Business as usual is no longer acceptable.