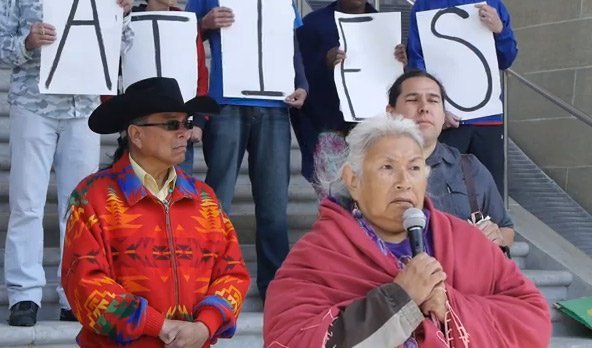 Press Statement, April 23, 2014, Standing Our Sacred Ground – First Nations, Tribal Leaders & Land Owners Send Message To Canada, Stop Tar Sands At The Source Washington DC – Northern Plains Tribal leaders and land owners representing the Cowboy and Indian Alliance joined in cross-border solidarity yesterday with their First Nations counterparts on the steps of the Canadian embassy. Their aim was to send a clear message to the Canadian and US governments to Honor the Treaties. Representatives of the Dakota, Lakota, Nakota, Ponca, Ojibway, and Cree Nations stood alongside ranchers and farmers to hold up huge letters spelling out “Honor The Treaties” and blown-up images of Treaty 8, Treaty 6, and the Fort Laramie Treaty of 1868, which cover Indigenous people’s lands affected by the controversial Canadian tar sands and the Keystone XL pipeline.

“It’s time for our people to start developing our own policies and enforcing our inherent Treaty rights. It is time for us to start defining what that relationship looks like for our visitors and remind our visitors that they came here and we are the ones, as Indigenous people, that gave them the permission to settle here on Turtle Island,” said Crystal Lameman, member of Beaver Lake Cree Nation.

The Beaver Lake Cree Nation is currently engaged in a landmark constitutional Treaty rights challenge in the Supreme Court of Canada that has named tens of thousands of Treaty rights violations of Treaty 6 by the provincial government of Alberta, the federal government of Canada, and dozens of oil companies operating in the controversial Canadian tar sands. The Beaver Lake Cree Nation case represents a growing understanding that through Aboriginal Title and Inherent and Treaty Rights, the Native rights-based strategic framework is the strongest legally binding strategy to stop the expansion of the tar sands at the source, including all of the associated pipeline infrastructure coming out of Alberta to bring this land-locked resource to international markets.

Oglala Sioux Nation President Brewer and Rosebud Sioux Nation Tribal President Scott were both present and reiterated their sovereign nations official position that their governments and peoples would not allow for this “Black Oily Serpent Pipeline” to cross sacred Lakota, Dakota, and Nakota lands. Faith Spotted Eagle of Protect the Sacred, a grassroots movement based out of Yankton Sioux Nation stated, “Half of the state of South Dakota was given by one of our grandfathers because these homeless people had come to our lands. We gave them homes and this is what we get in return. Enough is enough. This is our stand into the future that no more of these Treaties are going to be violated.”

Lower Sioux Nation member and activist Dallas Goldtooth stated, “We are here to remind that we are not just small ethnic groups, we are sovereign nations. We have a relationship that supersedes states and corporations as sovereign nations.”

The Canadian government is currently spending 20 million taxpayers’ dollars in a public relations campaign in the United States aimed at attracting investment into Canada’s tar sands and other harmful developments in Native lands titled Connect2Canada. Today’s direct action at the Canadian embassy marked a launch of the #Connect2Truth twitter campaign to counter this propaganda.